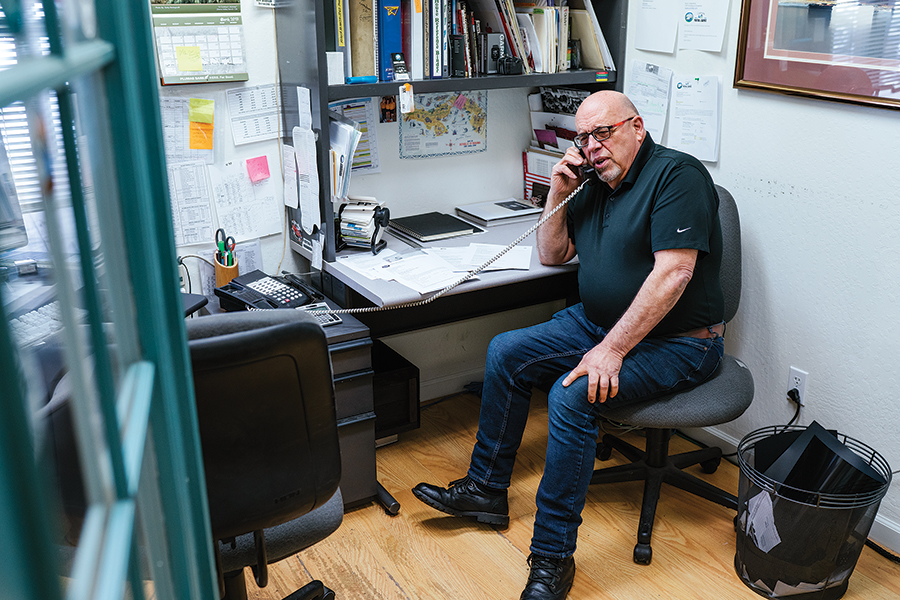 For Truckee homeowners Richard Valentine and his wife Rene Kaldunski, it seemed like it should be a simple process. They would take a portion of their existing home and modify it to create a small accessory dwelling unit (ADU). They would downsize and make their lifestyle more affordable, and the community would get desperately needed long-term housing. Unfortunately, they discovered that nothing is simple, quick, or inexpensive when it comes to building in the Sierra.

The Valentines began their process in June 2018. Their contractor assured them the construction process would be quick and easy, taking just over a month to complete, and available to rent out in September. All they were doing was adding a new door, remodeling a bathroom, and turning a wet bar into a miniature kitchen. The contractor was correct about the construction time, but everyone way underestimated the time it would take to get through the government agencies who controlled the permit process. The delays began when the Town of Truckee decided it needed a survey of the property. This took several weeks and cost $1,750.

“We found out later if we would have used pavers instead of a concrete pad the survey wouldn’t have been necessary,” said Valentine.

The delays continued when the Nevada County Health Department decided this was a project they needed to review, and five more weeks went by.

Then, in order to get approval with the Town of Truckee the Valentines had to incorporate a series of design changes including reducing the size of the project 50 square feet to get it under the limit of 500. That was when the couple discovered that the town measures square footage from the outside of the building, while they had measured the actual living space available to the tenant.

The town finally allowed construction to begin and it was completed on Dec. 19, but they still wouldn’t grant final approval and allow the couple to begin renting the property.

But wait, there is more. In December, six months after they started the process, Nevada County decided the project was considered a “change of use,” so they also needed an environmental health review, engineered drawings, and a perk test for the septic system. This is pretty much impossible to accomplish when there are multiple feet of snow on the ground.

In mid-February the couple met with supervisors from planning, building, and environmental health agencies for the Town of Truckee and Nevada County. Nearly a dozen people were in the room trying to figure out what to do about a small one-bedroom apartment that had been in the works for eight months. That is when Richard Valentine learned the agencies have never before approved one of these accessory dwelling units.

“Let me get this straight: We have invested this much money [$78,000], we have lost lots of money in potential rent, and we still don’t have a permit?” said Valentine. He wondered, at this rate, who else would want to go through this nightmare of a process?

“We can’t afford to stay in Truckee unless we can rent part of our home out. Our home is too big for us,” said Valentine. “It’s an opportunity to downsize our home, and then we could afford to stay here. Sixty-five percent of our area’s homes are empty most of the time. Many have excess space that could be converted so easily. If we got the homeowners associations, the contractors, and the Town of Truckee together we could put a big hole in the numbers with these ADUs. It’s not rocket science, this should be easy stuff.”

The meeting with staff officials did bring the town to finally agree to provide a temporary permit to rent out the unit, with the decision that a final permit pending the county health department’s approval would be provided once the snow melted.

“The town needs to hire an advocate on town’s staff that can cut through the red tape to make it work,” said Valentine. “I thought the agency staff members were all sincere, but they have blinders to the bigger picture. There needs to be strong leadership, and a concerted effort to make this happen. These ADUs are an avenue to really put a dent in this [crisis] for sure. I feel for people trying to make a living in Truckee and Tahoe that can’t afford a house.”

In the end, it seemed like Christmas finally came, just a little late: A final permit was ultimately awarded to Valentine in late February. But it wasn’t over. Completion of the process was determined by Valentine and Kaldunski signing a “restrictive covenant,” a document drafted by the Town of Truckee Planning Division, outlining further restrictions to the property, including “owner consents to periodic inspection of the property by representatives of the Town planning and/or building division.”

The couple says the document was vague and full of grammatical and factual errors, making it something they refused to sign. Valentine requested his attorney rewrite the document, but they couldn’t remove the inspection clause. Once he received it, Valentine says he felt pressured to sign it. That day, in an email to town planner Kirk Skierski, he questioned, “Why is it so difficult to do the right thing? We are sufficiently bullied.” Then he signed it and sent it back.

“Our motivation was that we hope to pass our home onto our children. We didn’t want them to face any of these challenges,” said Valentine, who planned to retire at the end of this year. With the funds spent on the project and rental income lost, he doesn’t know if that’s possible now. Valentine will have to take the signed covenant, get it notarized, and file it with the county before he can obtain what he called an occupancy document and finally start renting out the unit.

Trouble in ADU Territory
Music
12:00 am