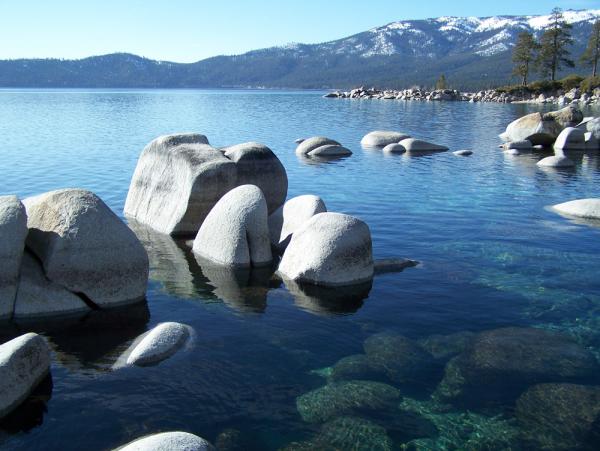 For decades government agencies have poisoned lakes and streams around the nation to rid the waterways of invasive species and to improve game fisheries, but the thought that toxic chemicals would ever be used in Lake Tahoe seemed as far-fetched as paving over Emerald Bay.

In a vote on Dec. 7, the Lahontan Regional Water Quality Control Board approved changes to its overall Basin plan that would allow the use of pesticides in Lake Tahoe. The changes must still be approved by the state water board, the Office of Administrative Law, and the U.S. Environmental Protection Agency before going into effect, said Mary Wagner, environmental scientist with Lahontan. But the approval of pesticide use in Tahoe could be in effect as soon as next summer, said Wagner. Individual applications of pesticides would still be subject to a permit process.

The use of pesticides, even to combat the growing threat of invasive species, has drawn intense criticism from environmentalists, water suppliers, and ecologists, who fear that pesticides could contaminate drinking water, kill native species, and hurt the lake’s prized ecology.

Madonna Dunbar, the executive director of the Tahoe Water Suppliers Association, represents water suppliers who provide more than 54 percent of Lake Tahoe residents with drinking water from the lake.

‘We do not want this to become a maintenance protocol for weeds,’ said Dunbar. ‘There has been millions and millions and millions spent to reduce contaminants to Tahoe, but to put the whole lake at risk because the Tahoe Keys needs their weeds cleaned out seems so counterproductive to the 50 years of work that has gone on at Lake Tahoe.’

Dunbar said her board has provided comments to the state water board and the U.S. EPA regarding pesticides, and is urging the board to focus on nonchemical alternatives at Lake Tahoe. Pesticide use should be at least tested in other water bodies in the region before being considered for Tahoe, said Dunbar.

Don Erman is a retired UC Davis professor and an expert in aquatic ecology. He has studied many of the government-sponsored fish poisonings over the years, and is deeply concerned about the use of poison not only at Lake Tahoe, but along the east side of the Sierra.

Erman and others point to governmental agencies’ checkered history with pesticide use in waterways across the nation. Poisons that have been used with abandon in years past are now being linked to serious human health repercussions, and often the poisons are applied at much more concentrated rates than anticipated, said Erman.

Rotenone, a powerful poison that has been used with alarming regularity in lakes and streams across the country, has been linked to Parkinson’s disease and kills a wide range of species other than the non-native fish it is often intended for.

The most famous regional example of Rotenone use was the poisoning of Lake Davis that rid the Sierra Valley reservoir of Northern pike, a voracious species known as the ‘water wolf.’ The pike were decimating the lake’s trophy trout population and posed the risk of escaping Lake Davis and spreading throughout the Sacramento River system.

Depending on your outlook, the poisoning was either a resounding success or an epic debacle. The California Department of Fish and Game’s first poisoning in 1997 failed to rid the lake of the fish. The City of Portola then sued the state, saying the toxin contaminated the city’s drinking water supply, and won $9.2 million in damages. Meanwhile, state officials embarked on a hodge-podged plan using everything in their power to kill the fish without Rotenone. They electrocuted fish. They exploded fish with underwater detonation cords (mostly unsuccessfully). They netted fish. They encouraged anglers to chop the heads off of pike. Nothing worked. So in 2007, they poisoned the lake again — this time unloading an estimated 17,000 gallons of Rotenone into the reservoir.

The second poisoning worked. And today, Lake Davis is again a prized trophy trout fishery attracting anglers from across the state.

But for aquatic ecologists like Erman, who view lakes as more than just sport-fishing locations, the use of powerful poisons is a troubling solution. Lake Davis, a man-made reservoir, was mainly filled with game fish stocked by Fish and Game. But in remote streams like Silver King Creek in Alpine County, where Rotenone has also been used, the poison can wipe out a complex aquatic web of life that ranges from microscopic native bugs to frogs and other amphibians.

‘Almost all of [the poisons] affect non-target organisms in some way,’ said Erman.

Because a stream’s microscopic invertebrates are often not even catalogued or studied, a widespread poisoning could be obliterating important portions of a stream’s ecology that is little understood.

‘Species and populations of species that are lost through poisoning may never return to the stream or lake and may be permanently extinguished. No amount of monitoring will change that reality. There is no mitigation for extinguishing a species,’ wrote Erman in a comment letter on the water board’s decision to approve pesticide use.

Erman has commented on Fish and Game’s poisoning of Silver King Creek high in Alpine County, which was eventually stopped by a California for Alternatives to Toxics lawsuit.

While Rotenone could be used in other portions of the Lahontan region (which covers a large swath of eastern California) following the water board’s decision, it would be an unlikely candidate for use in Lake Tahoe.

The League to Save Lake Tahoe’s Carl Young said dumping herbicides into one of the nation’s most treasured alpine lakes does not make sense, since some of the more entrenched invasive species are unlikely to ever be eradicated, only controlled.
‘The weeds and the Asian clams, we need to accept that we are most likely going to have those forever,’ said Young. ‘We most likely will not be able to eradicate those, but we can control them.’

The league said they could support a one-time emergency use of pesticides if a specific instance of the very destructive quagga or zebra mussels were introduced in a certain area, and the treatment had a high probability of eradicating the entire population in Tahoe. But the infestations of weeds, primarily seen in locations like the Tahoe Keys, should not be treated with herbicides, said Young.

‘Is there a risk to human health with pesticides? Pesticides are designed to kill things,’ said Young. ‘What are the long-term ramifications of introducing poisons into the lake that we rely on for drinking water?’

One of Young’s concerns is the cumulative effect of repeated poisoning of portions of the lake.

‘The common thing we hear out there is this is a minor amount and it will dissipate quickly, but there is a bioaccumulation issue, and how does this affect things that are not the target for the poison?’ asked Young. ‘Everything works on a chain in the ecosystem, and how long until they have an effect on us?’

The water board was backed up by numerous public and governmental agencies and the Tahoe Keys Property Owners Association in its decision to allow pesticide use in the region.

‘The problem is getting worse. It can still be controlled. It can still be eradicated. But we must be granted the tools to do so now,’ read the comment letter the association submitted to the water board.