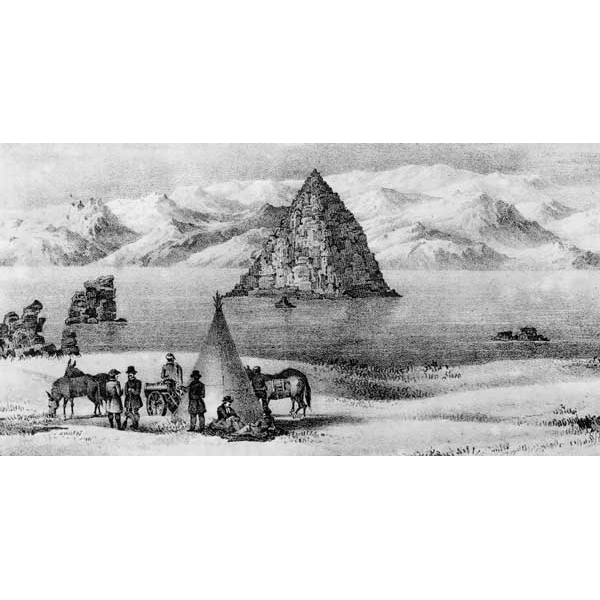 Ever wonder why Lake Tahoe is split down the middle, with one half in California and the other half in Nevada? Are the two states just that good at sharing? The history of the split dates back to the 1840s and the early explorers of the American West, when mapmakers were beginning to chart the unknown territory, and California joined the Union as a state.

Lieutenant John C. Frémont, an American military officer and later a candidate for the U.S. presidency, was tasked with the first of three government surveying expeditions in 1843, according to the Truckee-Donner Historical Society. His team spent nine months charting the Northwest before finally heading south and coming upon the friendly Paiute tribe that camped on the land by Pyramid Lake, the geographical sink of the Truckee River Basin that sits 71 miles northeast of Lake Tahoe. Sarah Winnemucca, granddaughter of the chief of the Paiute Tribe at the time, writes of the meeting in Life of Among the Piutes, “My grandfather met [Frémont], and they were soon friends … Captain Frémont gave my grandfather the name Captain Truckee, and he also called the river after him. Truckee is an Indian word, it means all right or very well.”

Frémont and his men had hoped the Paiutes would guide them to Mexican California, a Mexican Territory including much of modern day California, Nevada, and Utah, but as Scott Lankford describes in Tahoe Beneath The Surface, the tribe roared with laughter at the mere thought of crossing the Sierra Nevada Mountains during the winter. Yet, Frémont was persistent, and so Chief Truckee, although not volunteering to go on the trek, described in detail a route for them following the Truckee River to get to the Sierra Nevada where they would see a large mountain lake that fed Pyramid Lake, referring to Lake Tahoe or Donner Lake, according to Fremont’s “Discovery” of Lake Tahoe in 1844 by Mark Mclaughlin.

Frémont boldly headed southwest soon meeting the Washoe Tribe, who stressed that the men would likely die if they tried to cross the Sierra in winter. Pushing on, Frémont and his men trekked through waist-deep snow, with threats of snow blindness and starvation. Lankford describes that on February 14, 1844, Frémont and mapmaker Charles Preuss summited a peak to get a better view, and could see the outline of a giant mountain lake. After the epic trek, they couldn’t even enjoy the view! They ignored what Chief Truckee had said to them and instead assumed the large body of water must flow to the Pacific Ocean. The gorgeous lake did not spark much interest in either of the men, clearly delirious from their travels, and they continued on after marking it on the map, according to Mark McLaughlin.

Years later, in 1849, as Lankford describes, the battle over California entering the Union ensued, and if California were to enter as a pro-slavery state the careful balance in the U.S senate would tip in favor of the South. A budding politician, Frémont finagled the votes needed to redraw California state lines along the Eastern Sierra, thereby excluding a large portion comprising some of present-day Utah and Arizona. With the smaller Eastern Sierra boundary it was less likely that the state would break up and form a smaller division that was pro-slavery, according to John P. Wilusz in The Colorful History of The California/Nevada State Boundary. In the already heated debate it is hard to know exactly why the border was put where it was, as officials would surely want to keep the resource that is  Lake Tahoe entirely in California. Lankford provides the theory that “innocent measurement error in Frémont’s California map placed Lake Tahoe further west … worse yet Frémont’s map erroneously showed a river flowing directly from Lake Tahoe to the Pacific Ocean by way of San Francisco Bay.” After Frémont manipulated the border along the Eastern Sierra, he most likely placed the state division too far west based on his initial measurement made on that seemingly unremarkable February day, making Lake Tahoe a forever-shared treasure between Nevada and California.