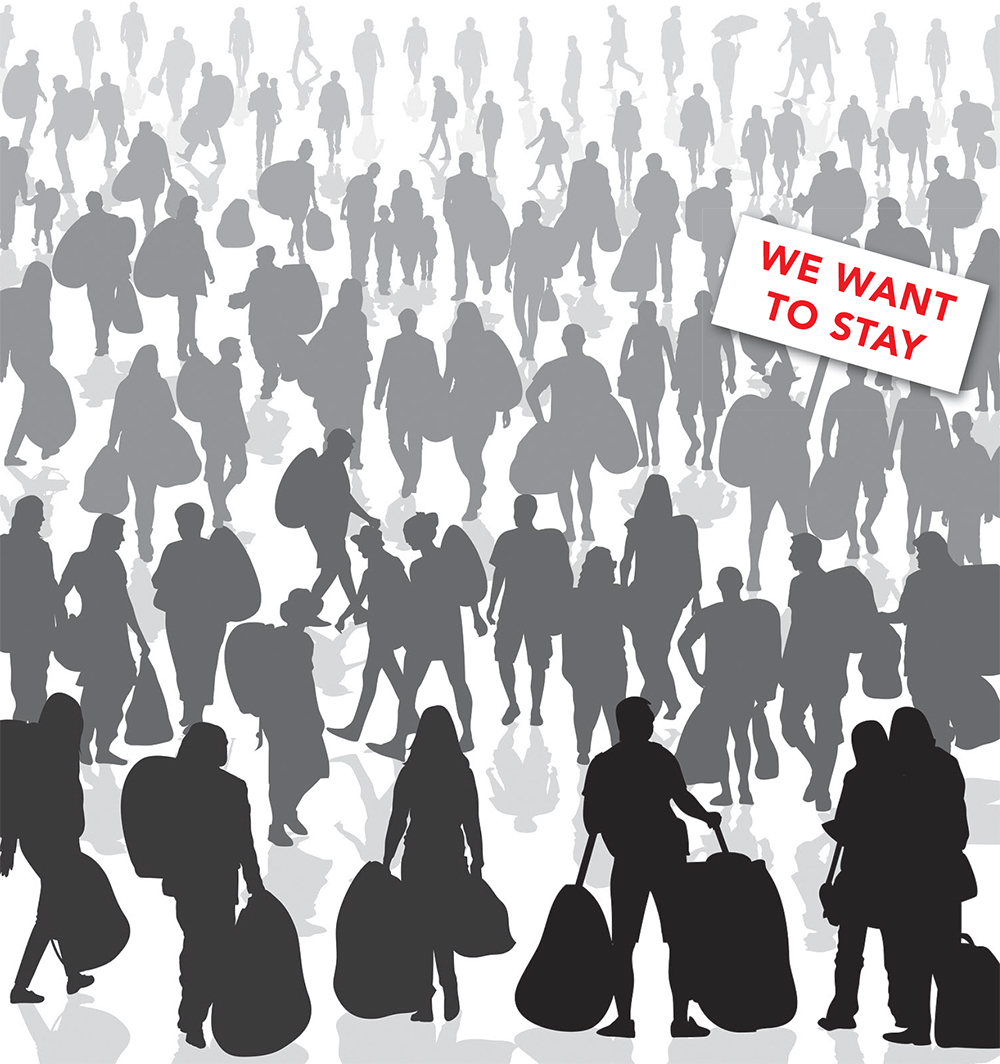 In many ways, Truckee/Tahoe’s housing market looks a lot like it did in 2005 — inventory is tight, prices are skyrocketing, and questions about whether full-time residents can survive the rising rents and steep purchase prices swirl.

But there is one dynamic difference — the presence of online vacation rental platforms that have ballooned into multi-billion-dollar businesses and allow Tahoe homeowners to rent out a home or room to anyone in the world with a few clicks of a button.

The ease of use and exploding popularity of platforms like Airbnb, VRBO, and HomeAway are sending ripple effects throughout Tahoe housing markets, exacerbating a rental housing shortage and blurring the lines between neighborhoods and hotels.

Several housing studies have examined the effect of this rapid sea change in the way travelers book vacation lodging. The studies highlight the thorniness of the topic as short term vacation rentals provide critical income for some full-time residents while creating housing shortages for others; they make for a more authentic visitor experience for travelers while turning upside-down decades of city zoning efforts to appropriately delineate residential and commercial uses within a city.

At the core of the issue is the fact that vacation renting — especially through frictionless online platforms like Airbnb — can be a much more lucrative opportunity than renting to full-time residents. A Sacramento Business Journal article, relying on data from Airdna, recently highlighted exactly how lucrative — a six-bedroom South Lake Tahoe property pulled in $219,780 last year in vacation rental income, according to the article.

Communities around Tahoe have responded to the new economics of the Airbnb phenomenon in different ways. Here is a look at three municipalities and how they are handling the issue:

“In just about every destination or gateway town, one hears a similar murmur: not only are short-term rentals squeezing the last drops out of the housing supply, but more profoundly, they are threatening the very character that drew in locals — and tourists.”

Truckee was one of the first customers of Host Compliance, a data analytics platform that allows the town to identify vacation rental properties that are not paying transient occupancy tax (TOT). Since working with Host Compliance, the town has seen approximately 400 properties that were not paying the tax come into compliance, said Kim Szczurek, administrative services director for the town.

“I think it has been very effective,” Szczurek said.

The town currently has 1,594 active TOT-paying properties, including 14 hotels and 895 professionally managed premises. That leaves 685 properties run by the individual owners.

The town has seen the TOT totals for vacation rentals managed by their owners nearly quadruple since fiscal year 2009/10, highlighting the rapid rise in popularity of Airbnb, VRBO, and HomeAway.

Some of that tax money does make its way back to solving housing challenges. The TOT funds (except for a 2 percent Truckee Business Improvement District charge) are deposited into the Town’s general fund, and $2.5 million were earmarked for housing solutions in this year’s budget, Szczurek said.

The Town expects to spend $1.4 million supporting the 66 affordable Artist Lofts in the Truckee Railyard project and $2 million toward the infrastructure for 138 locals-only apartments in the Coburn Crossing project this fiscal year.

Still, the Town faces an uphill battle, according to the Truckee North Tahoe Regional Housing Needs Assessment, published in August of last year. The report highlighted overcrowded housing conditions — some residents sleeping up to nine people in a single bedroom — workers juggling more than one job to make ends meet, and many households spending more than half of their income on housing.

At the same time, 64.5 percent of the Truckee/North Lake Tahoe housing stock sits primarily vacant, according to the study, an increase of nearly 9 percent since 2000.

Placer County has also worked with Host Compliance to identify short term rental units that are not paying TOT tax. The county found approximately 4,000 units (most on the eastern side of the county) that were not compliant, and has sent out 759 letters to the first batch of rentals to notify them, said Jennifer Merchant, the Placer County deputy CEO of the Tahoe area.

So far, the effort has been successful. More than 400 properties have registered and the county has collected $722,292 in additional TOT revenue. The county expects anywhere from $2 million to $3 million more in annual TOT tax as more properties register and begin paying the 10 percent lodging tax.

Merchant says that the county is not exploring ways to further regulate the short term rentals other than lodging tax compliance.

“Once the market changes like this it is a real challenge for local government to go in and make a difference,” Merchant said, adding that, “that kind of code compliance [to enforce short term rental regulations] would be overwhelming.”

But the county is exploring ways to increase funding for housing solutions for full-time residents — possibly even using some of the expected windfall of $2 million to $3 million in additional TOT tax to finance affordable housing. The county is also exploring ways to incentivize seasonal visitors who own homes to rent their houses to seasonal workers who live in Tahoe during the opposite season.

The City of South Lake Tahoe, the only incorporated city within the Tahoe Basin, has responded most forcefully to the issue, with a comprehensive permitting, inspection, and hearing process for each short term vacation rental property.

The new regulations passed in 2015 sparked some controversy within the real estate community. But the city has continued to examine the topic and commissioned a robust and in-depth socioeconomic report that laid out a bleak future for the city if the short term vacation rental issue is not adequately addressed.

“The City can expect that, without regulatory intervention and based on a projection of current economic conditions, South Lake Tahoe will likely experience a slow loss of permanent population. Households with young children will be the most directly impacted, while the percentage of the population age 65 and over will continue to increase,” the report said.

South Lake Tahoe City Manager Nancy Kerry said that some of the housing pressures are from global market forces that are difficult or impossible for a city to control.

“We have this limited supply of housing in an amazing place,” Kerry said. “There will always be this imbalance … we can’t restrict who buys housing, but we can restrict who they rent it out to.”

Kerry said the city has worked hard to strike a balance between local residents who want their neighborhoods protected from the adverse effects of a constant stream of visitors and realtors, and homebuilders and owners who see the option to vacation-rent their property as a right.

“I see no interest around the city council to ban short term vacation rentals,” said Kerry. “But we owe it to those who live here to find a way to make sure that those who are visiting leave no impact.”

“We have this limited supply of housing in an amazing place. There will always be this imbalance … we can’t restrict who buys housing, but we can restrict who they rent it out to.”

The short term rental issue has erupted into legal battles and hot controversy in communities around the nation, some of which have outright banned short term rentals, including Monterey, Santa Barbara, and Miami.

But many mountain towns like Park City and Aspen are taking a similar approach as Tahoe communities, ensuring that short term rentals are paying their fair share of the lodging tax and are subject to light regulations like permitting and inspection. Others, including Jackson Hole, have outlawed short term rentals across the majority of town (excluding specific lodging zones).

These strict bans on short term rentals have been an attempt to preserve housing for local workers and retain the character of neighborhoods throughout town. As a July Outside Magazine article titled Did Airbnb Kill the Mountain Town? put it: “In Bozeman, in Ketchum, in Jackson, in just about every destination or gateway town, one hears a similar murmur: not only are short term rentals squeezing the last drops out of the housing supply, but more profoundly, they are threatening the very character that drew in locals — and tourists.”

The socioeconomic report commissioned by the City of South Lake Tahoe strikes a cautionary tone for those who think light regulation will be enough to stall or reverse the impact of short term rentals on the character and economic health of a full-time community.

“Housing in the city will continue to increase in cost without regulatory intervention,” the report said. “The rate of conversion from fully occupied to vacant units will continue to outpace the development of new units as the city grows closer to full buildout. Non-resident homebuyers will continue to put pressure on the available for-sale housing stock, as housing costs in South Lake Tahoe are still considered affordable in comparison to the San Francisco and Los Angeles housing markets.”