Home Columns In the Past The Truckee Follies 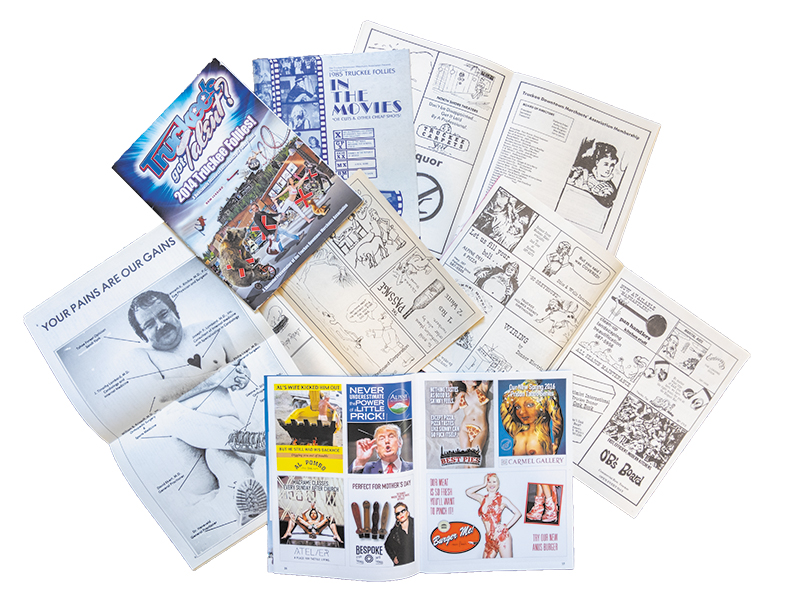 Editor’s Note: Ubiquitous in the community, Truckee native and author of this article Chelsea Waltersheid is a member of the Truckee Follies program ad committee.

My first steady job in Truckee was babysitting. I spent a lot of evenings and even my summer vacations watching kids. I lived up the street from Gary and Janell Botto, making it easy to walk to and from their house, upstairs from Discovery Preschool. Dinner with friends, Christmas parties, and concerts were the typical occasions that warranted a call to the sitter. There was one event, however, that made such an impression on me at a young age that I couldn’t wait to see it for myself.

The Bottos arranged for me to watch a group of kids so that the adults could attend a night of local theater. I didn’t think much about it until the group came home to scoop up their children. The mood in the air was electric as they recounted scenes from the evening with jabs and laughter. That settled it: I asked my mom to take me to the Truckee Follies.

Imagine my devastation and how completely letdown I was to learn the annual show was for adults only. Feeling the disappointment, my mom tried cheering me up, explaining the jokes would go over my young head. In addition to the sense of humor my mother felt I lacked, the dancers were scantily dressed, so I would have to wait until I was older to see the show. The secrecy of the skits and the mentioning of unmentionables really led my mind to wander as I contemplated the production I would have to wait years to see.

The opportunity to finally attend the show came in the mid 1990s. There was an excited buzz at work because it was Follies Season. I told my coworkers about the years I’d spent pining to see the event, always hearing second-hand about the dance numbers and wanting so badly to join in the laughter of those recounting the show. The women I worked with were giddy with the arrangements for my first production.

After shuffling around in a pile of forgotten papers, a look of eureka filled the room as copies of past programs were unearthed. Before that, I had no idea the show came with a souvenir program featuring off-color advertisements. These curious ads were humorous, strange, silly, and adult-flavored. Howls of laughter could be heard as we flipped through pages of artwork. These programs lived on for years after each production, serving as their own stand-alone show.

My first Truckee Follies was everything I hoped it would be. On the heels of Truckee’s incorporation, the writers had a lot to work with as the new government was full of fodder for the picking. The audience was loud with laughter as local actors played out current events relevant to Truckee and beyond. A hand-painted backdrop of downtown’s historic buildings set the stage for skits, songs, and dance numbers performed with a live band.

At one point, a chorus line of fishnet-clad women kicked their heels up across the stage as I recognized the faces of women formerly known as my friends’ mothers. That moment was the icing on the Follies cake for me. A show I had spent years anticipating proved to be a fantastic production bringing Truckeeites together to let down their hair and laugh at themselves.

It is Follies season again, which means over 100 volunteers are busy with the preparations of a large show. The Truckee Follies has been produced by the Truckee Downtown Merchants Association since 1981. Originally crafted as a spring variety show to entertain locals after a long winter, the Truckee Follies continues to be one of the largest fundraisers for the nonprofit. The program’s themes are eagerly anticipated and relevant to current affairs; past years have included Occupy Truckee, Truckee’s Got Talent, Brrrning Man Comes to Truckee, and Base Camp for a High Life.

Things have changed in the nearly 40 years since the first production. The show is now a biennial event as the production time and volunteer hours needed consumes nearly six months. The number of nights the show runs has ebbed and flowed, with a notably ambitious five-night run in 1985. The infamous ads, once hand-drawn, have become their own works of art as skilled graphic designers spend months getting the printed program ready for the public.

I found my place with the ad committee years ago: turns out my salty sense of humor is useful here. The writers, producers, and directors are on top of current events, both local and global, to bring the audience ever-changing content with thoughtful punchlines and witty deliveries. The actors come from all walks of Truckee life. Don’t be surprised when you see neighbors, teachers, doctors, engineers, and the chief of police joining in the over-the-top, sometimes raunchy humor to poke fun at something we all have in common: ourselves.