Home News Housing Crisis The Tip of What Could Be 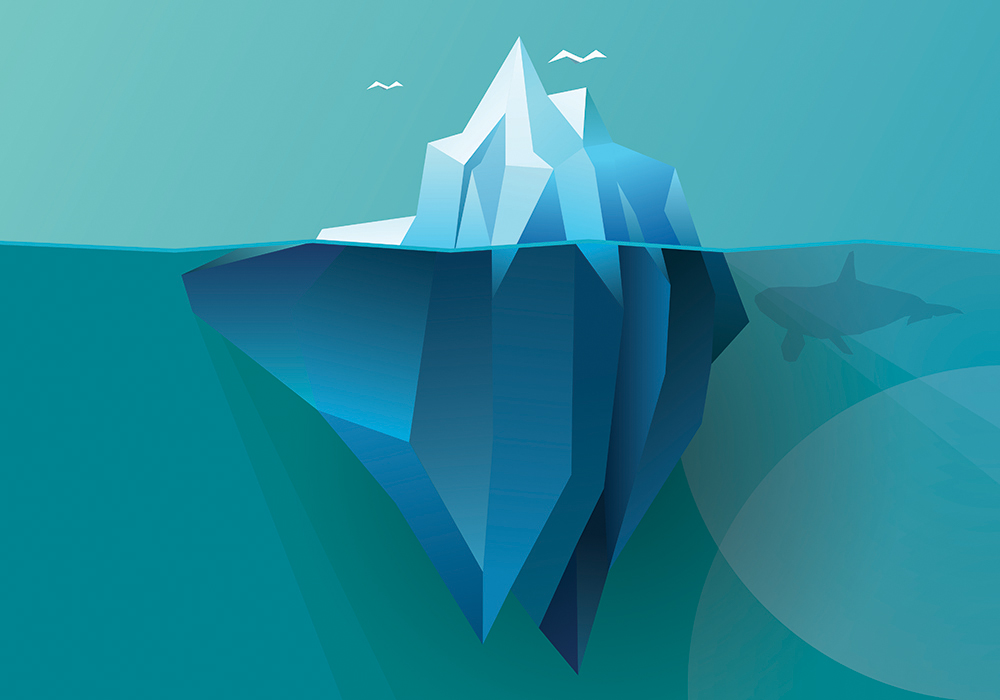 That Tahoe is going through a housing crisis is no big surprise to any one this winter, but the ramifications of the issue going unchecked could go deeper than what any of us imagine.

After sharing personal tales (see Out of Reach, February 2016) and a look at the history that led to the current housing crunch (see Tahoe Housing History, March 2016), in this third installment of Moonshine Ink’s #TahoeHousingCrisis series, we examine the ripple effects of this staggering community predicament.

Picture an iceberg. On the surface, we face stark statistics illustrating how dire the situation is in meeting our community housing needs (see below). But beneath the surface lays the bulk of the problem — a windfall of effects that have the potential to drastically shift the Tahoe community ecosystem.

Momentum is underway to address the housing problem with data crunching and community forums happening at a fast and furious pace. Heading the efforts for Truckee/Tahoe is a regional housing needs assessment campaign spearheaded by Tahoe Truckee Community Foundation. The team hosted a Regional Housing Study survey, open to all employers and employees, which just wrapped up April 5. While results are preliminary, a key finding shows that of the more than 1,300 employees that responded, 76 percent are overpaying for housing.

When more money goes toward shelter for a household, less money can go toward other necessities like groceries, medical care, school supplies. Likewise, when there isn’t adequate and affordable housing for the people in a community ecosystem, the other capital in the society suffers — the economy, environment, and culture.

Potential colossal side effects dangle heavily below Tahoe’s issue of unmet housing needs. Explore with us beneath the surface.

Maybe less well known is that the lower- and middle-portion of the market is suffering nationwide. A report released March 21 by Trulia shows that inventory for starter homes has dropped by 43.6 percent nationally, with starter home affordability down the most in California.

“They’re not yet an endangered species, but their steadily diminishing presence has some real estate analysts worried: First-time buyers are missing in action in housing markets across the country,” reported the Washington Post in 2013. “Big deal? Yes. If predominantly young, first-time purchasers are not entering the homeownership pipeline at anywhere near their traditional rate, at some point the system begins to choke.”

To borrow from the agricultural world, a high-end monoculture in the housing development world is taking root. What’s missing is political, economical, and cultural drive to diversify the housing stock. Preliminary data from the Regional Housing Study survey show there is a need regionally for high-density workforce housing.

“We are missing a range of housing,” said Sara Schrichte, project manager for the Tahoe Truckee Community Fundation’s Tahoe/Truckee housing needs assessment. The difficulty is that current zoning regionally does not allow for high-density housing, so policy changes will need to be made, she said, and some of the solutions include easing restrictions on in-law units and changing zoning laws.

2) Employers at a Loss

Truckee-Tahoe Lumber Company has 55 full-time employees, 50 percent of which live in Reno. “Of that 50 percent, I think half would move to Truckee if they could afford it,” said Andrew Cross, President of TTLC, when asked how the lack of affordable housing has affected his employee numbers. “We recently lost a key employee, our lead load builder, who moved out of the area because it was too unaffordable for him to raise a family here.”

Of his employees who do live in Truckee, Cross said most bought their homes years ago when they were more affordable, or during the recession. Luckily, the lumber company was able to fill the load builder position internally, but it took three weeks to backfill the promotion with an employee hailing from Sierra Valley.

This no-other-option outsourcing of employees has long-term implications for the prosperity of our region. Employees spend money in the community in which they live, contributing to the tax base and the pocketbooks of the businesses there. Less bodies in Tahoe stores has a domino effect on the economy. The lumber company is not alone. The Tahoe/Truckee housing needs assessment survey found that 46.7 percent of employers surveyed believe the availability of suitable housing impacts their recruitment. A great majority, 84.4 percent, of all surveyed disagreed with the statement “There are no significant workforce housing issues in the Truckee/Tahoe region.”

We see help-wanted signs abound in store windows throughout Truckee and North Lake Tahoe. Since 2008, the region has lost 6,500 workers from the labor force, according to the Tahoe Prosperity Center’s Measuring for Prosperity Report, released last October. While the statistics show more jobs than workers in 2013, many of the jobs are part-time, and the wages are too low to afford housing for many workers, so they commute from outside the area.

Unemployment rates in the Basin have remained higher than state averages, and incomes across the region have continued to decline since 2010 in most communities. Reno projects 50,000 new jobs coming to the “Biggest Little City” between now and 2019, according to the Economic Development Authority of Western Nevada. This news is a startling harbinger of a mass emigration of employees across the state border to find gainful employment.

If housing disappears, then employees will disappear. If employees disappear, so will employers most likely.

3) Tarnishingthe Jewel of the Sierra

Of 15,825 people employed in the region, 9,271 — or 59 percent — live elsewhere. And of those 12,277 that do live here, 5,723 work outside of the area. That equals a lot of daily Tahoe commuting traffic, which significantly impacts the environmental health of Lake Tahoe on a key indicator — road run-off.

“Stormwater runoff from roads and dense urban areas, vehicle exhaust … has significantly impacted Lake Tahoe’s famous clarity and the health of its watersheds,” according to the Tahoe Regional Planning Agency’s Lake Tahoe Water Quality Management Plan. Chris Carney, communications director for the League to Save Lake Tahoe, said runoff into the lake could cause algal blooms, which make the water warmer and foster habitat that favors non-native, warm-water fish.

Following the time-honored path of coming to Tahoe to ski, local interior designer Elisa Dinallo has called this place home for 26 years. She came from New Jersey in 1989, a year she says heralded a crossroads in the local housing landscape.

“I felt it was a big turning point in Tahoe,” she said. “So much changed in the ‘90s. Tahoe Donner alone just exploded.”

Today, Dinallo is witnessing firsthand how the hopeful skier’s dream is dramatically altered. Her nephew grew up coming to Tahoe to ski, and after graduating high school last June, he came to live with Dinallo to see if he could make it work. He and a friend, who has yet to move to the area, are actively seeking a place to start their Tahoe life, and it’s been “incredibly challenging” for them.

The two “have spent countless hours facetiming each other, scouring the internet, and thinking outside the box” looking for a place to live, Dinallo said. As they confront the reality of the bottom line, “the search has turned to places they can afford, including the middle of the Nevada desert and Bear Valley.”

The Housing Connection, which is a rental listing referral service that serves Lake Tahoe and Truckee, sent out an email April 4 with a plea for rental listings because they have more than 50 tenants looking for long-term housing. TTCF’s housing needs assessment project released data in January that shows only 1.3 percent of homes are available for rent, while 60.2 percent are “seasonal or occasional-use,” aka second homes.

“What we are seeing today is a tight rental market,” said John McLaughlin, Town of Truckee’s community development director. “There is nowhere to house workers.”

No available rentals portend that a key lifeblood of this community — the newcomers looking for work in the crucial service industry — will look elsewhere to live.

Dinallo is confident her nephew and his friend will make it work — “he’s resourceful” — but for many, the barriers may be insurmountable.

After finding stable housing in Tahoe proved too difficult for Alex Geritz and Phoenix Anthony, they recently moved to Portland, Ore. Although both of them held good jobs, have excellent credit, and a good rental history, their applications were continually rejected by the homeowners for rentals. They were frequently outbid by people willing to pay a lot more for the rentals.

“Everything that popped up was either too expensive, or it was a shack,” Geritz said.

Geritz and Anthony aren’t alone. As the Tahoe housing market gets tighter, more and more people are looking to Reno and elsewhere to call home. Census numbers show that the Tahoe Basin had 60,295 full-time residents in 2000, and that number dropped to 56,709 in 2010. That steady out-flow of locals includes mostly families and workers, as census numbers indicate the Basin tends to have an older population than either California or Nevada as a whole.

“Young people find many impediments to remaining in the region in terms of high housing costs and lack of full time, living wage jobs,” according to the Tahoe Prosperity Center’s Measuring for Prosperity Study. As locals gets pushed out of the area, more second homeowners come in, which “reduces social cohesion and support for local services,” according to the study.

~ Ally Gravina and Mayumi Elegado contributed to this story.

The Tip of What Could Be
Arts & Culture

The Tip of What Could Be
Education

The Tip of What Could Be
Wellness