Home Columns In the Past The Squaw Valley Stables 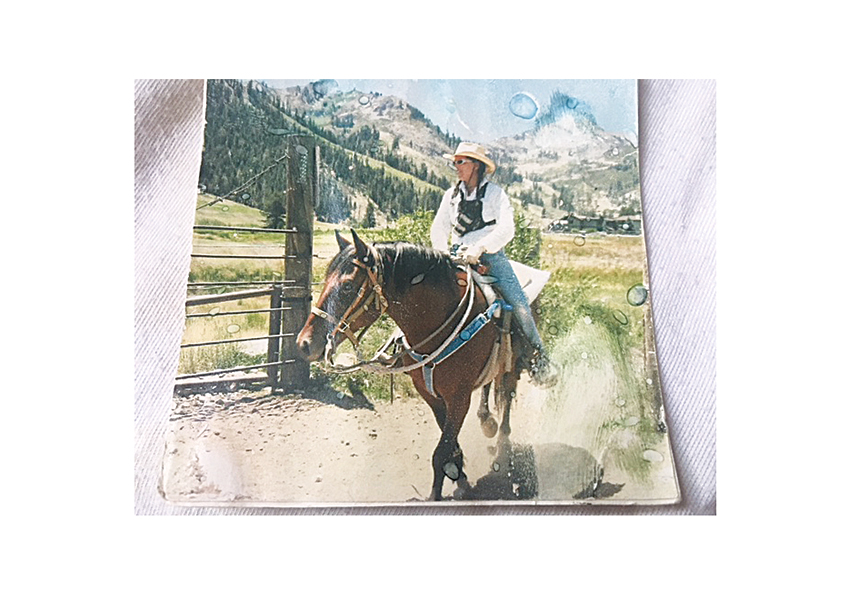 Reminiscing about Squaw Valley Stables calls to mind a simpler time in life. Horses, exuding beauty in every motion, would roam through the early morning at a calm pace. Like spending time with a best friend, each guide had a favorite horse with which he or she preferred to work.

When the stables closed in 2008, about 50 horses and tack found new homes. Some went off to Camp Richardson or Alpine Meadows; others ended up with their favorite wrangler.

I was one of those wranglers. Over six summers, I spent my early morning hours saddling up horses, followed by working long, hot days. One of the horses, Otis Spunkmeyer, a Mustang bay with a flowing black mane and a cascading tail that nearly brushed the ground, worked hard for me. I would whistle for him and he would come running. If a wrangler was lucky enough, he or she would be selected to lead the two-hour guided tour up Poulsen’s Gully or even the half-day ride up to Eagle’s Nest near the top of the KT-22 ski lift at what is now Squaw Valley Alpine Meadows.

With the onset of heavy construction, increased traffic noise, and rushed activity, however, running a horse operation became a challenging venture. It was a far cry from the days when SVS was a pack station run by Bud Jones. It just wasn’t what it used to be.

Eighty-seven years have passed since Bud and his herd of cattle and horses meandered around the valley of his bustling operation. Many will recall the expansive valley floor, now the Resort at Squaw Creek Golf Course, surrounded by the majestic mountain peaks of Squaw Valley. No longer are there horses and cattle grazing on serene misty meadows. While time dictates that this picturesque valley was destined to change, its earlier pristine state was enjoyed by the many people who joined Bud back then on pack trips to Five Lakes and guided hunting and fishing trips into the backcountry. Bud leased the land from the Poulsens until he passed away in 1962.

“I remember my favorite trip up Granite Peak trail, over the headwaters of the American River, on the back side of Squaw,” recalls Mitch Pavel, grandson of Eric Pavel. Eric and his wife, Maita, bought Squaw Valley Stables in the mid-1980s from the Poulsen family, who owned the stables for decades, including during the 1960 Winter Olympics.

Mike Pavel was lured by the romance of skiing and working in a beautiful place as an employee of Squaw Valley Ski Resort in 1980. Summertime led to working, managing, and living at SVS. The Pavel family went on to buy the 4 acres of land and continued a successful stable operation, managed by Kate Zaloga from the late ’80s until its closure.

“Rounding up the horses from the meadow before the golf course was such a thrill as they stampeded into the corral every morning,” says Kate.

Going back in time brings us all to a slower pace we often do not experience nowadays. Working for Squaw Valley Stables was a relaxed, yet demanding endeavor. The work ethic on a ranch is one of grit and perseverance, dirt and discomfort. Though a wrangler may be inwardly grimacing, on the outside he or she would grin and bear it for as long as it took to accomplish the day’s work, ensuring all is safe and sound until the next morning. For the other wranglers and me, this was home, every summer, sunup to sundown. The needs of the horses and clients centered around safety and the serenity of a memorable ride around the meadow, and that is what we gave them.

Old school activities often die hard as liabilities increase in number over time. Such was the case for Squaw Valley Stables a decade ago, when an accident involving a rapidly moving, empty construction trailer left seven clients scattered about while a wrangler and guide horse were seriously injured. Otis, the rescue team, and I managed to calmly guide the clients safely back to the stables, but the peacefulness needed for the horses, wranglers, and guests was evaporated. The various signs of “progress” — the golf course, construction, noise, expanse of pavement, thundering trucks hauling debris — were all markers that an operation from a bygone era could no longer exist.

Squaw Valley Stables closed its doors in 2008 because the valley had lost its tranquility. All of the horses found new homes, including my Otis Spunkmeyer, who remains a working horse. The Pavels persevere at their successful business endeavors, now using the land as a wedding venue. The sign still hangs, continuing to warmly greet guests, proudly announcing, “Squaw Valley Stables, Welcome!”

The Squaw Valley Stables
Community
12:00 am