Home Columns In the Past The Sorceress of the North Shore 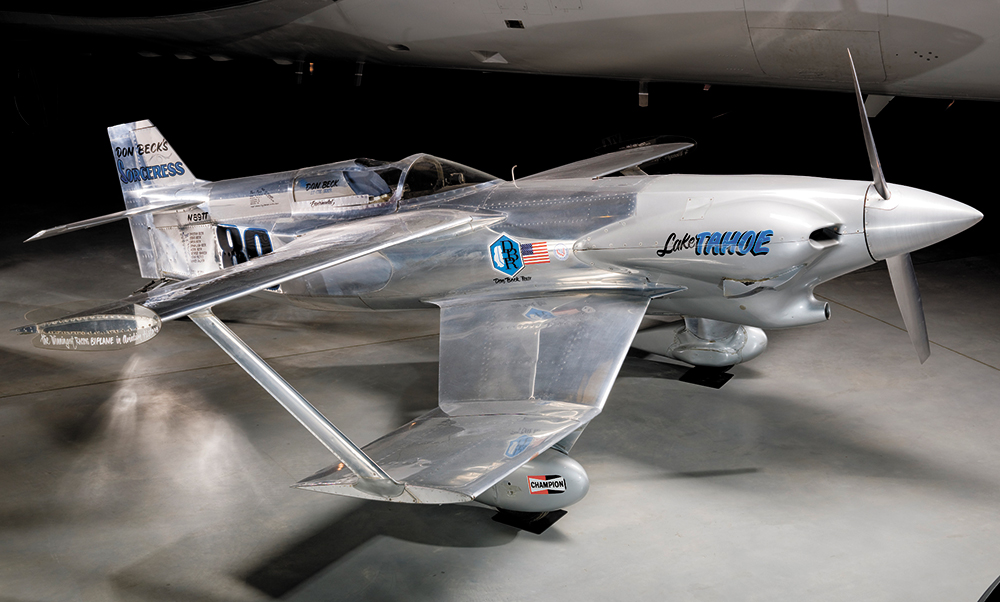 As I worked in the backyard this summer, the unmistakable roar of vintage aircraft engines made me drop my rake so I could catch a glimpse of a B-24 bomber or a gleaming silver P-51 Mustang fighter passing over Lake Tahoe. For many of us, the sound of classic propeller-driven aircraft takes us back in time for just a moment.

Each summer, the iconic Truckee Air Show provides our fix, and each fall the Reno Air Races also offer something fleeting, loud, and unique. The engine roar soaring overhead fills me with wonder, but also strikes some sadness as I remember one incident that in 1991 astounded many people in our community.

The history of such classic planes in our region runs deep. Visit the Smithsonian National Air and Space Museum in Chantilly, Virginia and you’ll see a North Tahoe connection displayed with some of the world’s classic aircraft. As you walk toward the massive Air France Concorde supersonic jet, a tiny, wicked-looking silver biplane parked on the floor catches your eye. This is Tahoe local pilot Don Beck’s “Sorceress,” a world record-setting stagger-wing racing aircraft that once set the world speed record for exceeding 200 miles per hour on a race course. The most successful racing biplane in history has “Lake Tahoe” written on her nose cowling and the Don Beck Realty logo, along with its Lake Tahoe profile, just behind the Stars and Stripes.

The story about why our community is represented in this collection is remarkable.

In the 1980s, Beck was a North Lake Tahoe realtor, a champion air racer, and a renowned stunt pilot. He was also a veteran U.S. Air Force combat fighter pilot. In World War II, Beck flew the P-51 Mustang in Europe. He completed more than 100 combat missions over Korea, and later capped a distinguished military career as a jet test pilot.

Making his home on the North Shore, he opened Beck Realty in Tahoe Vista and enjoyed a successful business while gathering trophies as a race pilot at the world-famous Reno Championship Air Races.

In his free time, he enjoyed stunt flying and aerobatics, often over the North Shore. His stunt biplanes could be seen on any clear day performing loops, rolls, or, my favorite: the falling leaf. Many of us would drop whatever we were doing when we heard the sound of Beck’s airplane flying. He never disappointed. Watching his amazing displays, many of which were just practice for him, would transport the watcher to a child-like place of wonder.

On a sunny September day in 1991, North Tahoe Fire Protection District Fire Chief Ray Martin piled his purchases on the counter at North Shore Hardware. Martin had also served in the Air Force during the Korea and Vietnam conflicts. After mustering out, he followed his dream to become a firefighter, and was promoted through the ranks to become chief. He enjoyed piloting a small plane in which he had a shared ownership.

Beck approached the counter with his own hardware and greeted Martin.

The two men flew out of Truckee Airport often, sharing the camaraderie of the small local airport and the community of fellow veterans and flyers there. According to the store manager, Beck invited Martin aboard to fly the second seat over Incline Village that day.

A chance to fly aerobatics with a world champion didn’t come along every day. Martin uncharacteristically dropped what he was doing, left his fire chief’s car in back of the Kings Beach Fire Station, and headed to the airport with Beck.

Folks on Burnt Cedar Beach that day describe an amazing show by the gleaming white Christian Eagle biplane, its loops and stalls, spins and perfect snap-rolls, hammerheads and the falling leaf, executed with precision. A witness described two low-level loops right over the water, but as the plane streaked down for her third loop, a huge plume of water erupted, and the little biplane was gone.

After a day-and-a-half search by multiple agencies, the aircraft and the bodies of Beck and Martin were found off the East Shore in about 70 feet of water. Two families, countless friends, and a community were thrust into mourning.

Beck left behind his wife, two sons and a daughter, grandchildren, and legions of friends, business partners, and the fellowship of pilots and veterans the world over. Chief Martin left behind a new wife, his two daughters, and a devastated fire family at the North Tahoe Fire Protection District. The funeral procession of hundreds of fire engines and police cars stretched from the top of Brockway to Truckee as Chief Martin made his “last run” to Sierra Mountains Cemetery.

If traveling to our nation’s capital, make sure to visit the Smithsonian at Dulles Airport and let Lake Tahoe’s “Sorceress” work her magic on you. Or, ponder her history as you enjoy the Reno Air Races on Sept 12 to 16, one of the few remaining venues for the sport.

The Sorceress of the North Shore
Sports & Outdoors / Wellness