Home Columns In the Past The Pyramid Lake Wars 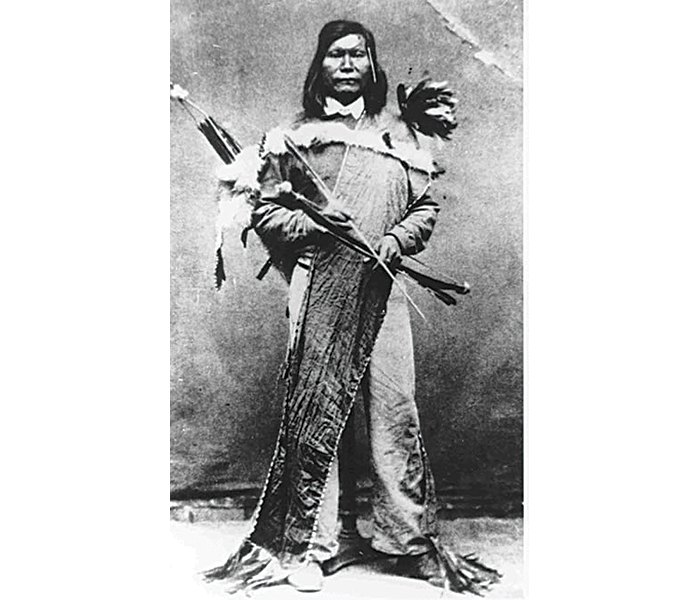 The American West and plains states witnessed significant battles and atrocities between white and native sides throughout the middle of the 19th century. What eventually became the Nevada Territory, however, endured only minor, usually isolated, violent incidents for the most part. The sheer size of the area and small, seasonally mobile population of natives, made for less conflict, though plenty of terrible acts were committed against natives as white expansion grew.

In 1859, however, this changed in an irreparable way. At the time, a population of whites was living in the area of Honey Lake, north of present-day Reno. Capt. William Weatherlow, of the Honey Lake Rangers, was concerned that episodes of violence, theft, and vengeance were increasing on both sides. He met with the Paiute Numaga, also known as “Young Winnemucca,” to discuss ways to curb violence and coexist. They made an agreement that any abuses on either side would be discussed and adjudicated between the two of them before any retribution was taken.

This worked for a time, but as white expansion intensified, theft and violence increased, and many events were not reported. Weatherlow and Numaga met again and agreed to parlay with their own leaders to craft solutions — Weatherlow with army officers and “Indian agents,” and Numaga with Paiute chiefs of the local tribes, which were completely independent of one another.

Sadly, even as those meetings were underway, an atrocity was inflicted upon the Pyramid Paiute that sent the peace-keeping effort into a death spiral and began what some historians and newspapers termed the Pyramid Indian Wars. In May 1860, two 12-year-old Paiute girls were foraging for roots in the area of Williams Station, a Pony Express station and whiskey bar owned by the three Williams brothers. To the Paiute, nothing is more important than family, and when the girls did not return, the tribe scoured the area, including the Williams cabin. Men there denied seeing the girls.

A few days later, a Paiute approached the Williams cabin to trade. As he turned to leave, he heard screams from under the cabin. He hastened back to the Paiute camp and alerted the people there, including the girl’s father and uncle. The entire Paiute camp went to the cabin to confront the Williams brothers, who denied the girls were there. The girls’ brother struck a Williams in the head with his rifle and threatened the other, who then raised a trap door in the cabin floor.

The two children were pulled up, revealing gags tied over their mouths and their obvious molestation. Two of the Williams brothers and three other whites were killed on the spot and their cabin burned to the ground. The third brother, James, had been away and arrived the next morning to find the carnage. He rode in a panic to Virginia City, where he told of “bloodthirsty savages” killing “kind-hearted settlers.”

Maj. William Ormsby, a slavery proponent, failed mine and hotel owner, appointed himself to exact revenge against the “Red Devils.” Without investigation or discussion, he gathered 105 vigilantes to pursue the Paiutes. Poorly armed, lacking experience or a plan, they set out from Virginia City assuming their foe would run and hide. Yelling “an Indian for breakfast and a pony to ride,” they rode off to the admiring shouts of the citizenry.

Their assumption was fatal. Using battle tactics developed over centuries, the Paiute warriors lured the overconfident miners through a choked pass by the Truckee River. Spying a warrior on horseback, one of the vigilantes took a long shot with a scoped rifle, missing badly. The warrior rode off and Ormsby and his men took off in pursuit, only to find themselves surrounded and cut off by a force of approximately 300 warriors armed with rifles and bows. Many of his hastily assembled militia turned and tried to run, but the only escape was narrow and steep and many — including Ormsby — didn’t make it.

The final tally shows that 76 of the armed mob were killed against the loss of what some estimate as possibly three Paiutes.

Whites for miles around fled in fear of the “uprising.” Some blamed the Mormons for instigating the attacks. On May 24, Mexican War veteran Col. John Coffee Hays launched a more organized pursuit with 547 volunteers, including the Truckee Rangers. An additional 104 U.S. Army regulars rode from Fort Alcatraz, and the Second Battle of Pyramid Lake was fought south of present-day Nixon. Hays chose his ground and tactics more carefully and the battle was fought to a draw, the Paiutes disappearing into the desert and mountains with minimal loss of life on both sides.

Whites took arbitrary revenge on any natives they encountered, including an incident at Slide Mountain, where several Washoe women were slaughtered while cutting willows. Prejudice, violation, and abuse of people who were different from themselves, not to mention hasty action without investigation, had led to slaughter and chaos.

In 1849, there were approximately 150,000 Native Americans in California and the Sierra Nevada. By 1870, there were less than 30,000. Enslavement, disease, and murder devastated all of the tribes.