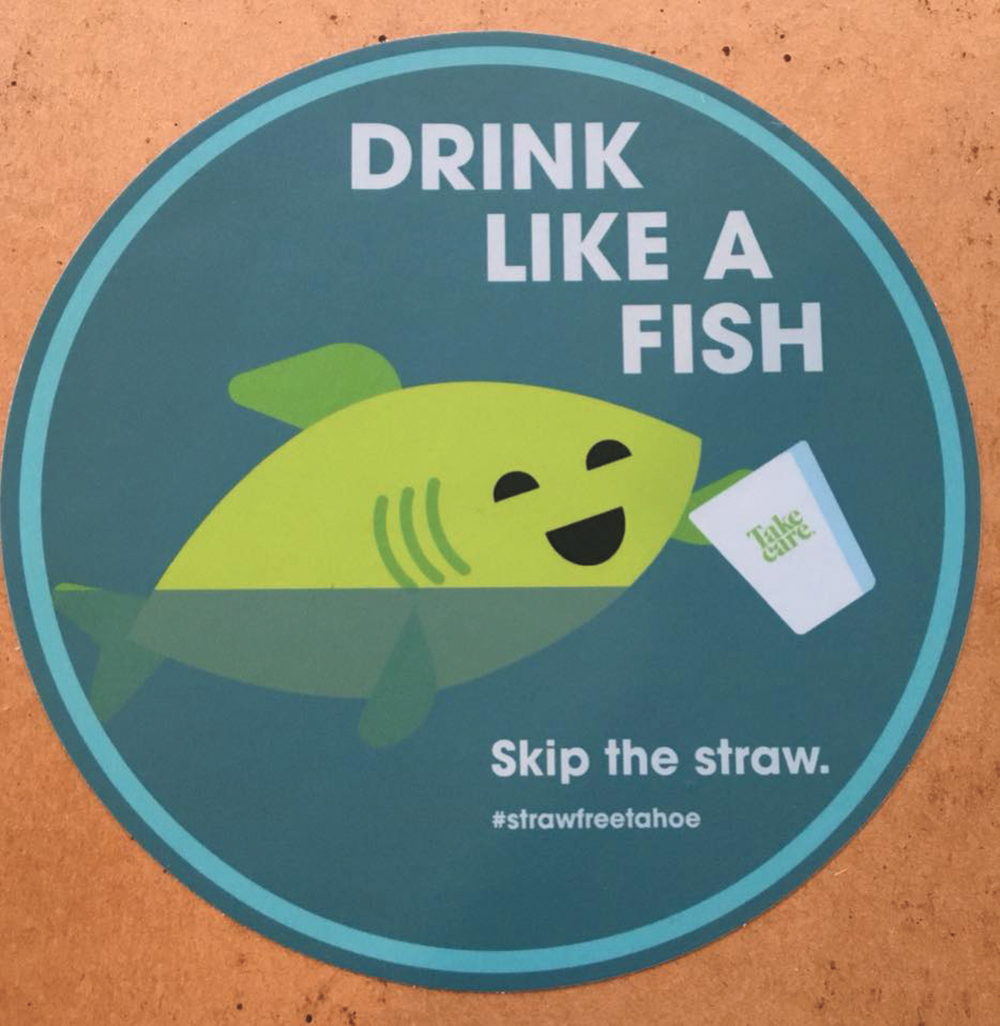 For years, bartender Pat Forbes finished each cocktail by popping a straw in it. Dozens of cocktails a day, thousands of straws a year, until Squaw Valley Alpine Meadows adopted a “straws on request” initiative this year to reduce its use of single-use plastics. At first, Forbes thought that giving straws on request was bad service, but now he’s educating customers about the issue and explaining that it’s for the environment and the company’s ethical standards.

“Nobody wants to be admonished for doing something, they want to be supported. They want to be acknowledged that they are doing the right thing,” said Forbes.

The U.S. consumes enough straws in a day to wrap around the earth’s circumference 2.5 times, according to the lastplasticstraw.org. That’s 500 million straws every day, 175 billion per year, filtering into landfills and littering water sources and oceans. Forbes doesn’t consider himself an environmental crusader, but he understands the impact this tiny piece of single-use plastic has on the global environmental crisis. As of 2015, plastic waste had accumulated to 6.3 billion metric tons since 1950 worldwide. Twelve percent has been incinerated and only 9 percent has been recycled, according to a study in the journal Science Advances.

In addition to reduction in national consumption, the greatest hope to reconcile the negative impact of plastic on the environment comes from local communities. Truckee/Tahoe’s mishmash of towns, counties, and states makes recycling complex, but in the last couple of years there has been a swell of educational outreach programs and campaigns for recycling, as well as some state and local legislation such as a mandate on recycling composted materials in California, and the banning of Styrofoam in South Lake Tahoe that goes into effect Oct. 3.

It Starts in the Schools

The campaign was inspired by North Tahoe and Truckee high schools’ Envirolution Clubs, where students advocated for straw awareness and asked local restaurants to join the movement to eliminate plastic straws. This includes substituting eco-friendly alternatives and offering straws by request only, which many establishments such as Squaw Alpine are already in the process of adopting. Students have also been actively involved in events like “The Last Straw” film screening at the Tahoe Environmental Research Center and trashion shows for Earth Day at Squaw Valley.

“We are sending a singular message about being a leader both regionally and globally,” said Philips. She thinks straws are a tangible way to participate in environmental action. “Straws seem like an easy first step, but it’s really a behavior change that people can easily make. And it seems like people are open to this idea.”

According to Aardvark, the original U.S. paper straw company, companies that offer straws on request reduce straw consumption by 40 percent, making up for the cost of switching to alternatives.

There’s also legislation in the works that will require food waste or organics to be recycled. The Town of Truckee is addressing this for commercial businesses under the Mandatory Organics Recycling Bill (AAB-1826), according to Erica Mertens, recycling coordinator for the Town.

Executive Director of SWEP, Missy Mohler, is preparing for the new changes with the school district’s sustainability clubs to teach other students how to separate their organic waste in the kitchens and cafeterias.

“I want to give hope, I want to show them that they can be active and do one thing every day and contribute to the environment,” Mohler said.

Mohler’s approach to enacting change combines scientific knowledge with action to inspire empowerment in students. SWEP is proud to be a partner with TTUSD, which was recently honored to be selected as one of six school districts in the nation for their achievements in environmental literacy, energy, waste, and conservation efforts.

Red Truck owner Larry Abney says the initiative brings ease to the restaurant and to the customers who want to participate. “I think everybody in Truckee is, for the most part, pretty environmentally conscious, but this just gives them an even easier option to be that way and not use (single-use) to-go containers.”

Abney notes that the pilot hasn’t changed business as usual, and that they have successfully circulated about 50 percent of their containers. “It’s going great. It definitely makes an impact,” he said. “On an average day we’re getting ten to 15 of those green containers back, then that’s 15 containers we’re not using, which is a good start for a project that’s only been going for a little while now.”

Truckee explored a Styrofoam ban similar to South Lake’s, but considering the cost of single-use material alternatives and their ability to be recycled or composted, they found that bypassing single-use containers altogether was the best decision for the Town, according to Mertens. In the future, the town wants to fund part of the cost for the containers to incentivize the elimination of single-use products.

Truckee also recently implemented new services that include providing blue and green recycling bins that will go into effect beginning this summer to replace the current “one big bin” mixed-waste system.

Mertens noted that when recycling is kept separate there is a much higher chance of it being kept clean and able to be recycled. “As our materials get collected differently and source-separated (in bins), we want to make sure they’re also processed that way,” she said.

Throughout this year, garbage and recycling collection in Truckee will transition from both bags being hauled by one truck and sorted via single-stream to separate truck routes for recycling, green waste, and garbage bins. All waste is delivered to Eastern Regional Landfill at Cabin Creek Road to be separated and manually sorted by material type. Recycling for the Town gets transported to Sacramento, and all other garbage is hauled to Lockwood Landfill in Nevada.

It’s difficult to say where the recycling goes after Sacramento, but according to an August 2017 CalRecycle.ca.gov update on statewide exports, in 2016 California recycling exports totaled approximately 15 million tons (valued at $4.6 billion) and 62 percent of that went to China.

Keep Truckee Green’s Waste Management Guide advises to only recycle plastics numbers 1 and 2 as part of the town’s educational outreach efforts. This is due to limited markets for the other plastic material types, many of which do not get recycled even after collection at other facilities.

“The reason why we tell people it’s only plastics number 1 and number 2 is because we want people to understand what’s happening to their materials so that some of the responsibility falls on them as well,” Mertens said. She explained it’s too easy to throw materials in the garbage or recycling without understanding where they go and what happens to them.

“But I do think that for the average person, recycling is really an easy entryway to being an [environmental] steward because it’s something that impacts your everyday life,” Mertens said.

Incline Village began a zero-tolerance solid waste enforcement in August of last year to keep wildlife away from garbage, an issue prevalent in Tahoe.

“This is the strictest trash rule in the Tahoe Basin,” said Madonna Dunbar, resource conservationist for the IVGID Waste Not program. “Since that has gone into place we have quite successfully locked up the bulk of the garbage in town from wildlife. The consciousness of what you’re consuming and how you can reduce is the number one method on stemming this tide of trash. Until we reduce, we don’t have the tools to deal with how much recycling we’re trying to generate.”

Incline Village’s diversion rate is currently 29.05 percent, compared to 5 percent 10 years ago. The state of Nevada does not mandate recycling, but Washoe County has a voluntary 35 percent rate.

On the other side of the state line, California has a diversion goal of 75 percent by the year 2020, and local jurisdictions are required to reduce solid waste sent to landfills by 50 percent.

Currently, Placer County averages a 68 to 72 percent diversion rate annually, logging 61 percent in 2016, according to the county’s Environmental and Engineering Utilities Department.