Not even 24 hours before, the public service district’s board had unanimously voted to change its name from Squaw Valley to Olympic Valley, the latest in what would be a line of local organizations, corporations, and businesses vying to remove “squaw” from their titles. Even the “Keep Squaw True” movement, which is a Sierra Watch campaign, is seeking a new name.

Squaw Valley Alpine Meadows helped spark the change when it publicized a decision to move away from the word in mid-June, citing it as a derogatory and offensive term toward Native American women. Resort staff had already been discussing such a change internally, explained president and chief operating officer Ron Cohen, but when a Sacramento Bee reporter reached out to see if the word would be pulled, things sped up.

It’s an action the Washoe Tribe of California and Nevada has been advocating off and on for about 15 years, says Chairman Serrell Smokey. Different leaders would bring it up, then the idea would fall dormant with their departures. Yet elders within the tribe carried on the dream of removing the word from Washoe lands.

Smokey avoided actual use of the word squaw in his conversation with Moonshine, though he did describe its offense to Native American people. Military folk, he said, as late as the Civil War time period adopted terms to dehumanize the enemy.

“This word was one of the original ones that was used,” he continued. “It made it easier to not view someone as a human being and not view them as a woman. They were property; you could do whatever you want, push them out, abuse them.”

The touch-and-go efforts of deleting the word from names and places reached a climax locally with nationwide social justice protests in recent months.

“We’ve really come a long way in a really short amount of time. Even as a nation as a whole, not just the tribe,” Smokey said. “… With these protests and all the things that are happening, I think it gave us a really good foothold to push these things forward.”

Though the new ski resort name won’t be announced until after the 2020/21 winter season is over, the publicity has had a trickling down effect on the resort’s neighbors.

The Resort at Squaw Creek, Squaw Alpine Transit Company, and Squaw Valley Lodge all plan to look into a name change, though some are waiting to see what Squaw Valley Alpine Meadows decides on before they make their own decisions.

Squaw Valley Academy got the jump on the resort by a year, beginning work in the summer of 2019 to come up with a new name. On July 1 of this year, the academy officially became Lake Tahoe Preparatory School.

The community is already recognized as Olympic Valley by the U.S. Postal Service because a census-designated community in Fresno County already was known officially as Squaw Valley, but utilizing the word ‘Olympic’ in business or agency titles brings into play legal questions, as it’s trademarked by the United States Olympic & Paralympic Committee. The public service district informed Moonshine it’s confirming whether the adoption of Olympic Valley in its title is legal.

Cohen said his team at the resort isn’t going to pick the easiest option. Rather, “we’re going to do it deliberately and carefully and we’re going to find a name that really reflects who we are and who our people are and what they love about this place.”

The resort hosted a community meeting on July 23 to hear from homeowners in the valley and worked closely with the public service district in that name-change decision.

Wayne Poulsen, who moved with his family to Squaw Valley in 1946 when he was 2 years old and whose family helped found the ski resort, explained that the word represents what the landscape shows: “a beautiful young woman lying on her back gazing at the sky, gazing at the eternal blue sky.” There’s a manifestation of such a visual in the ridgeline overlooking the valley.

“The images which become attached to the name have more to do with the people, with each individual person who thinks about, who uses the term in that way than it does about the actual mountain itself,” he furthered. “The mountain exists as it is. The mountain is there, the mountain’s a God-given place. That is what squaw is. That’s the squaw. That’s the mountain. They’re interchangeable.”

He’s not arguing one way or another for any name, Poulsen continued. Rather, he says he’s against changing a name without understanding the history and “especially without taking responsibility for your own feeling about Washoe women, Washoe people.”

Once a new name is selected, then comes the domino effect of updating tangibles. The public service district released a list of everything that needs to change to reflect its new title, including signage, fire department equipment (the Squaw Valley Fire Department falls under the umbrella of the PSD), and social media platforms, but there’s no official estimate yet for what the cost means for taxpayers. The majority of expenses will be for staff time, the district says.

“The only other notable expense is the cost to replace the lettering on the outside of the building,” explained Jessica Asher, board secretary and executive assistant with the service district. “Logo wear and uniforms will be updated on their regular replacement schedules and are not expected to result in significant expense. Other changes, such as vehicle decals, website, and emails, are also not expected to be too expensive.”

The resort, on the other hand, has a considerably larger list though it, too, won’t have a hard estimate ready until the name change is officially revealed.

“Our name’s all over everything and there’s literally millions of pieces of Squaw Valley collateral around the world because we’ve been selling it for 70 years,” Cohen said. “… It’s going to be millions of dollars to change that.”

Despite the potentially hefty price tag, Cohen said the company is committed to the cause.

“We’re doing this,” he said. “It’s going to cost what it costs. We accepted that cost when we made the decision, as part of making the decision … When you’re dealing with a question of ethics and morality, to just weigh it against a commercial balance is not the right approach.”

The Village at Squaw Valley, with its restaurants and retail shops, will also reflect the decision made, though Cohen said those occupying the leased commercial spaces will be able to choose whether to change the word out or not. (He hopes they do.)

Some people, meanwhile, are resistant to the change. Sal Lucia, a resident in the valley who submitted in writing his opposition to the public service district, told Moonshine in an email: “Given the cancel culture thinking of the day, everyone is so quick to be offended. History doesn’t matter and everyone is judged by the standards of the moment. Maybe one day philandering and plagiarism will become the cause of the day. Will we then erase [Martin Luther King, Jr.] and disregard his contributions? One could even be offended by using the proposed moniker Olympic by asserting that this celebrates ancient Greek traditions, and someone will be quick to point out that they practiced slavery.”

Lucia isn’t the only one who’s pointed to an erasure of history with the name change — another homeowner in the valley wrote in to the public service district to oppose the decision; Cohen said he’s seen many social media comments expressing dislike; and several Moonshine readers shared their dismay online, but Washoe Chairman Smokey said he doesn’t see removing the word as erasing the area’s history.

“It’s recognizing what it was and getting people to know we don’t want that part of history lost even though it was a bad time,” he explained. “… It’s historical trauma that’s passed down from generation to generation. That’s what it represents and that’s why it needs to be changed but also recognized. We can’t fix a problem if we don’t recognize that there is one.”

The name change isn’t limited to businesses and organizations — roads and landscape features are being considered, too, which has been happening across the continent for decades.

Successful removal of “squaw” from other titles around North America extend at least as far back as 1988 when Squaw Rapids Dam in Canada was renamed to E.B. Campbell Dam. Closer to home, in April 2018, the U.S. Board of Geographic Names (BGN) approved the renaming of Squaw Ridge in Amador and Alpine counties to Hungalelti Ridge, a word proposed by the Washoe Tribe.

According to the BGN, there are nine defined features in Placer County that utilize squaw (including Squaw Creek, Squaw Gulch, and Squaw Peak), seven in Washoe County, two in El Dorado County, and zero in Nevada County. Across the U.S., a total of 1,178 features use the word.

Any person or organization can request that the BGN issues a formal decision on a proposed name change, regardless of public or private affiliation. The most recent quarterly review list of name changes was released by the BGN on July 10 of this year; it did not include any California features with squaw in its current title.

Placer County will lead the changing of public road, park, and directional map names in the local valley. Cindy Gustafson, district five supervisor for Placer, said staff has heard from the tribe and others on such matters, but movement to change out signage won’t take place until after the resort has made its decision so that efforts are complementary rather than confusing. Squaw Creek Road, an offshoot of the public street Squaw Valley Road, is a private road leading to the Resort at Squaw Creek and any decisions to change that name would take place separately.

Smokey told Moonshine anything that can have squaw removed from its title, the tribe is all for it. He knows it won’t happen overnight and he’s happy it’s starting, but he’s also not going to walk away until every ‘t’ is crossed.

“Just because they said they were going to change the name doesn’t mean the name’s changed yet,” he finished. “They can’t just leave this dormant as if we won. It’s not over ‘til it’s over.

Until those letters are actually taken down and something else is up there, then we can celebrate.” 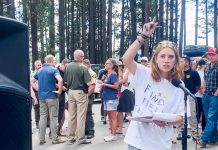 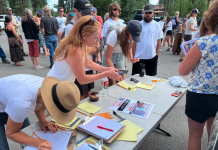