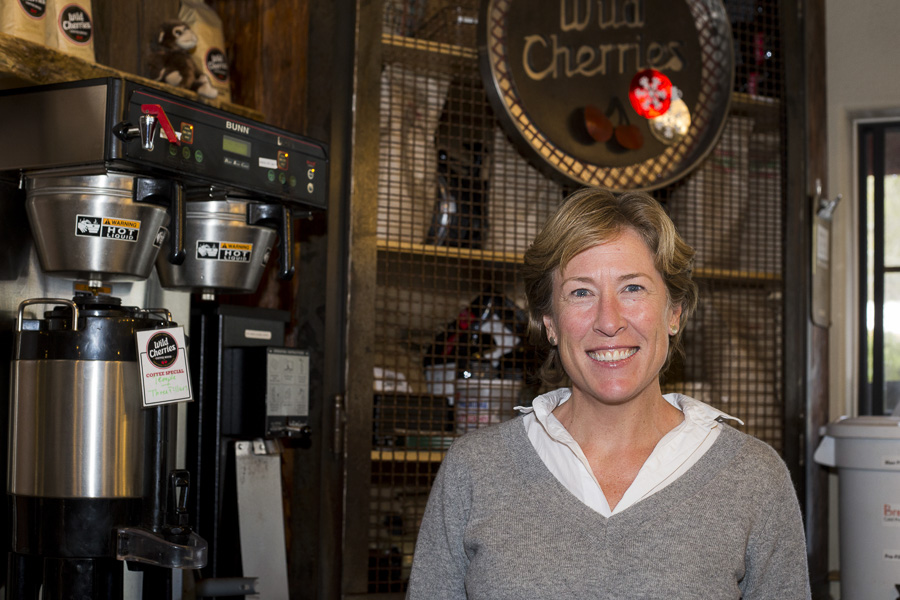 It’s no secret that Tahoe is rife with professional athletes, both current and retired, but it may surprise some to learn that a number of local businesses, from long-standing staples to new companies just taking off, have former elite athletes at the helm.

The decision to leave a professional run in a lifelong passion is not easy. Here are five athletes who all decided their successes needed to be measured in more than medals and magazine covers.

Kristin Krone stands in the construction zone that will soon be her new bakery, deep in discussion with her team. The white subway tiles gleam behind her as Krone ponders the best placement for the kitchen sink. Although she has owned Wild Cherries for 18 years, this is her first opportunity to design a space from scratch. And she is loving the new challenge.

Before she got into the coffee shop business, Krone was chasing gold on the U.S. Ski Team, traveling on the World Cup circuit, and competed in the 1988 and 1992 Olympics. In her later years on the team, however, she found herself pondering different careers at every turn, which she took as a sign that she was ready for a life off the snow.

The most important carryover from her racing career to her business career, Krone says, relates to being able to achieve a goal. Krone had no experience running a business, aside from a degree in hospitality from Sierra Nevada College. But, always the hard worker, she was undeterred by the gauntlet of difficulties that stem from owning a business. She instead could see straight ahead to the end goal, and mapped a path to get there.

“I never thought about if the work was hard, or what I had to do,” Krone says. “That was the goal and I will just get there, no matter what’s thrown at you. It’s just because I was so goal-driven and I attribute it 100 percent to that whole life of ski racing.”

Looking back on her illustrious careers, both in business and ski racing, Krone is actually more proud of what she’s done with Wild Cherries than any successes she had in the global ski racing circuit. She loves that she’s created something that provides good-paying jobs for locals, and that she can give back to the community.

“That’s just a sport, how hard is that? You just go ski and do your best,” Krone says. “This is different. When it’s thriving, that’s an achievement. I feel like I’m a product of the community; I feel like I’m as Truckee as it gets. Sometimes my old teachers come in, and I feel like a kid that I’m so proud I can buy them a cup of coffee. I like having grown up here and feeling like I’m still here and doing something good.”

There’s something about forging metal, Toni Standteiner of Mountain Forge says, that consumes you. When Toni wields his hammer and brings it crashing down on the red hot steel laid across the anvil, there is a sensation that resonates from the tools up through his body. “It just gets under your skin, it’s something you want to do, and you miss it after a while if you don’t do it.” It’s a feeling, he says, not unlike the sweeping giant slalom turns he once carved as a member of the U.S. Ski Team.

Toni, along with his brother Hansi Standteiner, owns Mountain Forge, a Truckee-based blacksmith shop that was founded by their father 50 years ago. But blacksmithing isn’t the only family trade for the Standteiners. Ski racing is in their blood, starting with the patriarch, Hans, an Austrian ski racer and coach at the 1960 Olympics at Squaw Valley, and trickling down the family tree, to Toni, Hansi and their sister Heidi, all of whom were on the U.S. Ski Team.

Hansi always knew he would come back to work at the forge, but he decided it was time to retire when he would fall or do poorly in a race and not get riled up about it, like he did at the start of his career. For Toni, he had the opportunity one year to either compete in the X-games in skicross, or take a blacksmith apprenticeship in Austria. Both were once in a lifetime opportunities, and when Toni turned down the X-games for the apprenticeship, he knew his competitive career was over.

Aside from their athletic experience, they also had their father to learn from. Growing up, Toni realized what aspects of his dad’s business he liked — his friendliness and propensity for chatting with everyone on a job site — and what he didn’t like — his use of primarily handshake agreements, and the frustrations that came with people not paying for work on time. This shaped the way that he and Hansi run the business to this day.

“From a very young age, I was exposed to what it meant to own your own business. You come home late because you’re the owner and it has to get done,” Toni says. “So, I guess I didn’t heed the warning.”

Roasting coffee, Nick Visconti explains, as he pours steaming water over the mahogany and chestnut-flecked coffee grinds, filling the air immediately with a sweet aroma, is all about style, not unlike snowboarding. It’s part art and part science, he says, and no easy feat.

“I love that there’s style, I love that it’s hard,” Visconti says. “It’s really difficult to be a good coffee roaster, to put it all together to find that x-factor.”

Visconti’s coffee roasting business, Drink Coffee Do Stuff, may have just launched this month, but this has been a vision in the works for years for the former pro-snowboarder. It was after a few years of racking up stamps in the passport, and constantly being on the move for shoots and competitions, that he finally took a step back and decided he needed to make his life’s purpose dependent on more than just his accolades or personal achievements.

“I was just as ignorant to [coffee] as I was the first time I strapped into a snowboard at Kirkwood,” Visconti says. “I didn’t mind starting at the bottom, because I wanted to know it so intimately, like I knew snowboarding so intimately.”

Visconti says that when you leave your athletic career, especially when you’re still in your heyday, people don’t understand why you would walk away from a pro sports career to start working minimum wage as a barista. “I remember I was being medaled at X-games 2012 by Nas, the rapper, and then literally a week later, I was at my barista job, sweeping wrappers into a can,” Visconti said.

Despite running a new company in Truckee, Visconti is already committed to supporting the community and its residents. And for guidance in his altruistic endeavors, he need look no further for inspiration than his dark roast blend, Grandpa Max.

“Grandpa Max was actually named after my Grandpa Max,” Visconti says. “He was a Tahoe man … a man of character and integrity and with such an infatuation with Tahoe. I also think that this company is emulating that same obsession with the people and place of Tahoe, and I think I just inherited the DNA of three generations that I’m enamored with this place, with protecting it and with making it thrive.”

Snowboarding brought Ryan Williams to Tahoe when he was a high school junior. After winning a national title, he was invited to Tahoe by Burton in the early ’90s, kicking off a career that included magazine spreads and features, X Games appearances, and even worked with brands on product development.

But it was riding on Donner Summit one day, gazing out at the Sierra, that Williams decided he needed more from his life, and that he needed to “give back to the world more.” He left his athletic career when he still had a promising future ahead, but “My grandma’s old adage was, ‘leave the party when you’re having a good time,’” Williams says. “One of my mantras in life is to zig when everybody zags.”

He went back to school for finance, then became a loan officer at a local bank, then a marketing manager for the Ritz-Carlton, and later a financial planner. Decidedly not your typical post-snowboarding careers, but Ryan had a long-term plan.

“I always wanted to start an action sport company, but didn’t know what,” Williams says. “I knew I had to have patience and spend time doing other things and gathering knowledge and experience, and meeting the right people along the way.” It was a somewhat chance encounter with two other local guys with tech backgrounds, Dave Sick and Robert Suarez, that led to the creation of Stomp Sessions, the self-described “Uber of actions sports.”

Stomp Sessions is an app that allows you to book lessons with three levels of instructors, ranging from local coaches to full-on pros; think Julia Mancuso and Ryan Sheckler. There is free content available, like a library of simple tips, straight from the mouths of pros, and even a video analysis tool.

It also gives athletes a way to make money when they retire. Williams knows that’s a hard transition, and with Stomp Sessions, he aims to give these athletes a way to market and profit from their best asset: The knowledge of the sport they competed in.

As far as how his athletic career influences his job now, Williams says that, “successful people do what unsuccessful people don’t want to do … You can go just have fun with friends, but you’re not going to progress and get to the podium.”

The Gold Medal Standard
Business
10:00 am