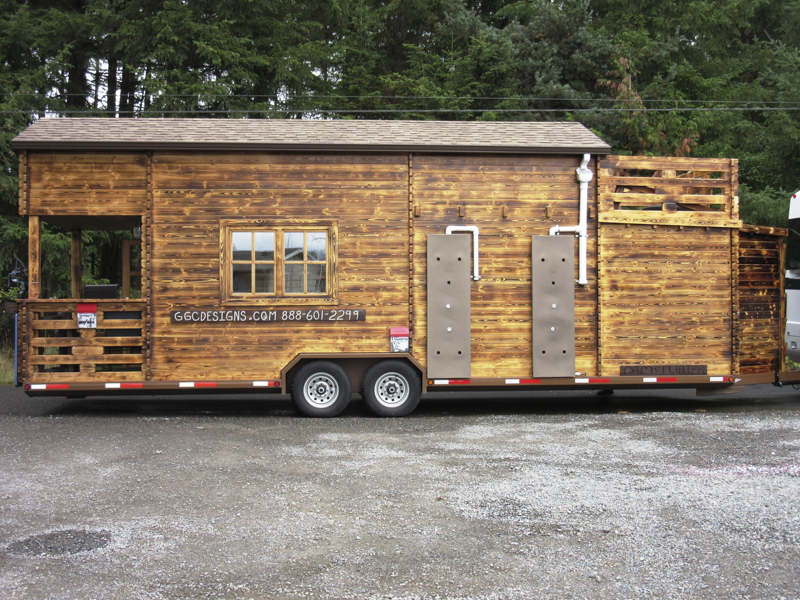 When the housing market crashed about a decade ago, one of the results was a trend toward downsizing. The phrase “tiny home” emerged, people scaled down to smaller homes, RVs became potential retirement properties, and an overall tendency toward living within or below one’s means began to take shape. Here in Truckee/Tahoe this trend toward living small has been presented as one of many potential solutions to our housing issue, but it is up against a series of obstacles in the form of ordinances and fees that are still catching up.

More than one year ago, Moonshine Ink spoke with a couple who had moved to Tahoe with the dream of living small, tiny, that is. In February 2016, Sean and Tara Flanagan were exhausting all possible avenues to find a home for their 140 square foot tiny home on wheels. Now, after more than a year of moving from place to place, researching tiny home regulations, and speaking in public forums on the subject, their wheeled tiny home is gone, and Sean and Tara are living in a 450 square foot home in Carnelian Bay. Sean said they are in the process of drawing up plans for a tiny home of their own that is on a permanent foundation, and built A-frame style to help accommodate snow load requirements.

“The main constraint that we’ve encountered, or at least the public has seen as a constraint, is that we require any home on a single-family lot to be on a permanent foundation,” said Yumie Dahn, associate planner for the Town of Truckee. “Tiny homes, generally we just see them as — if they’re stick built and on a foundation — they’re just like any other home. If they’re on wheels, then they’re considered RVs or mobile homes and would need to be in a mobile home park right now.”

If it’s not in a mobile home park, and it’s on wheels, it’s in violation of the Town’s municipal code after a period of two weeks. In fact, for safety reasons, it is unlawful to occupy any structure not built in accordance with the Town’s development code for more than 14 days, even on one’s personal property. This includes vehicles and campers. Therefore, any tiny home would need to be placed on a permanent foundation, engineered to handle snow load, and connected to utilities for water supply and sewage disposal, all of which carry substantial permitting costs. In Placer County, any home on wheels is considered an RV, and is thus only allowed in designated camping zones for a maximum of 30 days.

“The building permits are about $30,000 for a 400 square foot house, and if you’re building a 6,500 square foot home in Martis Camp, the building permits are about $60,000; so it just doesn’t really balance out,” said Chris Hinkel, a realtor from Sierra Sotheby’s International with a passion for exploring tiny home options here in Truckee, and a creator of a series of YouTube videos on the subject. “That’s why I did the videos, I was trying to see if there was a way where somebody could get into a home for the least amount of money, and I was shocked to see how much it would cost.”

Hinkel said she has not seen any tiny homes having been built successfully in the Truckee area over the last three to four years, but she is hopeful that certain lots that are well suited for them might be utilized in the future. Dahn stated that although she receives many inquiries about living small, mostly anonymous and by phone, she hasn’t seen any tiny homes come into the Town since she started working there five years ago.

Truckee does not have design requirements or minimum lot sizes that would constrain the building of tiny homes, so a modification of the permit structure and permanent foundation requirement could potentially streamline the process exponentially. Dahn said that there is talk of altering the town’s traffic and facilities fees, which currently are a flat combined fee of $8,818 per single-family residence unit.

“Right now our council is directing us to modify our impact fees — just the town fees for facilities and traffic — those are the two that the Town controls, to be based on square footage rather than a per-unit basis,” Dahn explained.  “With our new housing workshops there’s potential that [the Town council] may decide they want to look at new code revisions to allow for tiny homes in single family residential lots on wheels.” She added that the California Building Code would be the main constraint to a provision that could circumvent the permanent foundation requirement, as it is statewide. The state code is not impassable though; in November 2015 the city of Fresno altered its development code to allow for wheeled tiny homes to be placed on properties as secondary units.

Living small is nothing new

Tiny homes may be trendy, but they’re not the only means of living small. A studio apartment is essentially a less glorified tiny home, but according to the Regional Housing Study released last year, “there are very few studio units available” and monthly rents range from about $950 to $1,200.

The Truckee/Tahoe area also has a variety of small cottage-style units, but not only are these becoming difficult to afford for both renter and landlord, they are also difficult to maintain. Theresa May Duggan has been renting out four 360 square foot cottage-style units in Kings Beach, located just a block off the lake in the middle of town, for almost 40 years, but said that exorbitant taxes are hindering upkeep, and impact fees stand in the way of redeveloping the aging units.

“The rules are such that in order to clear any money you have to maximize the square footage to minimize the impact fees,” Duggan said. “If the county and the community [are] really interested in workforce housing and building workforce housing, they need to look at their impact fees and the barriers to the implementation of good ideas.”

Duggan said a large portion of the tax burden comes from many of the flat fees charged by special districts in her jurisdiction, and that she pays roughly the same in total for fire protection, sewer, and electrical for her four small units as the 4,000 square foot lakefront property across Brockway Vista. She said she has rented the units at affordable rates since the late ’70s, and even lowered her rents during the recession, but high taxes are making it near impossible to remain solvent and charge realistic rents. She currently houses six renters on her property, but with one of the cottages requiring a costly roof repair after the winter, she is contemplating selling or redeveloping larger units.

Not easy, but not impossible

Local jurisdictions have voiced their knowledge of the issue and a desire to adapt — it was within the last year that the Town of Truckee first included “tiny homes” in their municipal code as a single family dwelling — but restructuring fee structures and development codes does take time. There are still a few ways to mitigate the costs of living small, though.

If going the tiny home route, pay close attention to district and governmental boundaries, as this will affect the permitting cost. For example, fees for a 400 square foot single family dwelling in unincorporated Nevada County should run you $4,561.35, according to the county’s development agency, but the impact fees for a same sized unit in the Town of Truckee will cost $8,818. These don’t account for fire, recreation, and school fees, which are based on square footage. According to Hinkel, the most inexpensive route inside the Town limits is to find a discounted lot that is already hooked up to the sewer system. If the lot is outside of a homeowner’s association you can build any size house, and therefore mitigate cost by building small, all the way down to 70 square feet, if you desire.

Secondary units have also emerged as a possible solution, because then much of the infrastructure is already established on the property and impact fees are reduced. Pat Davison, executive director of the Contractors Association of Truckee Tahoe (CATT), said that CATT worked extensively with Placer County on the Tahoe Basin Area Plan to include a program on secondary units. The program now allows for the building of a second unit on any residential property, but includes deed restrictions in perpetuity that limit renting to locals only, and rent prices to be low-income affordable. Davison says that CATT supports the locals-only restriction, but thinks the rent price restriction will deter people from building. The County will be conducting yearly studies to determine the program’s effectiveness and decide if it or its deed restrictions needs to be modified.

Pam Neff, the event coordinator for the Truckee Home and Building Show, said the show decided to focus on tiny homes this year due to their potential for aiding the local housing crisis. Prefabricated small size units and tiny homes could potentially become more inexpensive housing if placed as second units outside of HOAs.

Neff plans to bring in both expert tiny home manufacturers from across the country as well as local building and planning department employees to add to the local conversation regarding solutions.

Another route is to take a gamble and wait it out, and see what arises from the local discussions that are taking place and town initiatives to restructure fees and ordinances. Sean Flanagan is optimistic about the possibility of change, and said that when talking about options with the local governments, “It’s better to be straightforward. You can tell they’re excited about it.”

Regarding the Town of Truckee’s approach to impact fees and permanent foundation restrictions, Yumie Dahn said, “If this could solve our issues we would love it, but I think we need to attack it from lots of different angles.”

The Downside of Downsizing
Arts & Culture
All Day