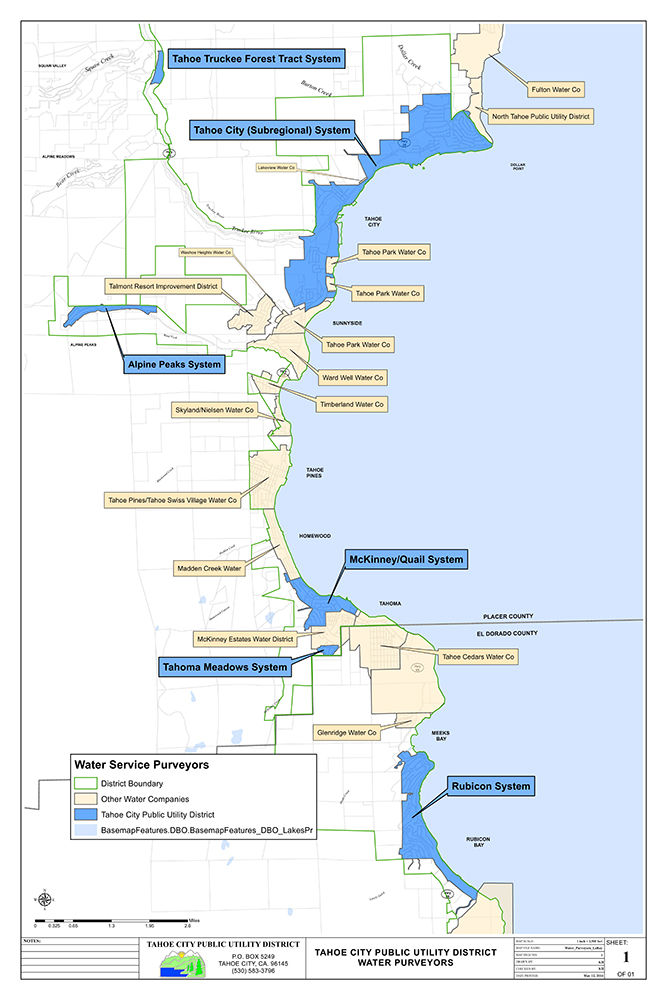 By 2025, all water systems in California must be metered. This requirement proved too much for Mid-Sierra Utilities, which owns and operates Tahoe Cedars and Madden Creek water companies in Homewood and Tahoma.

“I didn’t want to put in the meters, so I sold it,” said Robbie Marr, president of Mid-Sierra Utilities.

But instead of selling to the Tahoe City Public Utility District(TCPUD), which put in offers for the small water companies in 2013 and again earlier this year, Marr and his siblings decided to sell to San Dimas-based Golden State Water Company, which has 39 water systems across California. Marr said the sale has not been finalized and an application still needs to be submitted to the California Public Utilities Commission, which regulates private water and sewer companies. Marr believes selling to Golden State is the best choice for his family, and for customers.

“My water company is good, but not perfect,” Marr said. “They can do a lot. They have a lot of people behind them.”

While it has been made public that a sale is in the works, and a representative for Golden State answered questions at a recent public TCPUD meeting on the matter, a spokesperson for the company told Moonshine Ink that he could neither confirm nor deny that an offer had been made to buy Mid-Sierra.

“Golden State Water Company has been providing safe, reliable water service to Californians for more than 85 years, and we are always looking into opportunities to serve new areas in the state that could benefit from our expertise,” according to a statement by Senior Vice President of Regulated Utilities Denise Kruger. “At this time, we don’t have any updates to share regarding new opportunities.”

Although Golden State boasts 1 million customers and 500 employees throughout California, the TCPUD believes the right choice to be for it to take over Mid-Sierra Utilities water systems and is not backing down despite the impending sale. The public utility district has acquired 17 private water systems since it was founded in 1938. There are currently 10 private water companies along the West Shore.

“The only way we have grown is through acquisitions. It is synergistic, economy of scale, efficient, and local,” said TCPUD spokesperson Kurt Althof. “The more of these individual systems that we can tie together, the more we can build infrastructure.”

Althof said the TCPUD offered an “above market value” offer to Mid-Sierra. After negotiating and going back and forth, Mid-Sierra accepted the TCPUD’s offer as a backup, if the Golden State deal falls through, he stated. The TCPUD’s final offer was $4.55 million, including $50,000 each in consulting fees for the three sellers, and free water for life at the four homes of the sellers. Althof said the TCPUD’s offer included $150,000 “greater than any other bona fide offer.” Marr told Moonshine that the offer mirrored Golden State’s.

“The PUD rates are too high. They can do what they want,” Marr said. “The rates are going to go up no matter what.”

Currently, the 1,265 Tahoe Cedars customers pay an average of $36.70 per month for water compared to the TCPUD rate of approximately $75 per month. Rate information was not available for the 165 Madden Creek customers. The TCPUD has said it would gradually adjust rates for those customers over a 10-year period to match the current district rates for its 4,200 customers.

Public utilities, which make up 80 percent of the state’s water deliveries, are mandated by Proposition 218, which prevents public utilities from making a profit by mandating that rates equal the cost of service provided.

In public meetings, Golden State would not say how much they would charge customers, noting that the CPUC sets the rates. An Aug. 26 L.A. Times article revealed that Golden State recorded a $47.6 million profit last year on revenue of $364.6 million. It is a publicly traded company with 260,000 water customers.

Tahoma resident Ken Lewin, who has been a Tahoe Cedars customer for 10 years, said he is concerned about Golden State taking over and believes the TCPUD would be a better choice.

“My impression is that the PUD would be a more responsible water steward as opposed to the private water company,” Lewin said. “My thought is there would be more local accountability.”

“Is a private, for-profit company going to do the same thing if they don’t have to?” Althof asked.

In an Aug. 30 letter to TCPUD General Manager Cindy Gustafson, North Tahoe Fire Protection District Chief Mike Schwartz noted the utility district had been an “excellent long term partner” for the fire district and would support the TCPUD buying Mid-Sierra.

While there is community support for the TCPUD to take over the Mid-Sierra Utilities, it is ultimately up to Marr and his siblings to decide who buys the company. Marr, who said his father bought the company in 1962 on “a handshake and $50,” affirms he is confident in Golden State and their technical experience.

However, Althof said the TCPUD will continue to pursue the purchase of the private company because the district believes that to be beneficial for the community.

“We feel very strongly that it is best for everyone involved,” Althof said. “We would be the most appropriate provider.”

The Continued Privatization of Water on the West Shore
Arts & Culture / Wellness
8:30 am

The Continued Privatization of Water on the West Shore
Community
4:00 pm

The Continued Privatization of Water on the West Shore
Community