Home Sections News The Business Side of Shopping Local 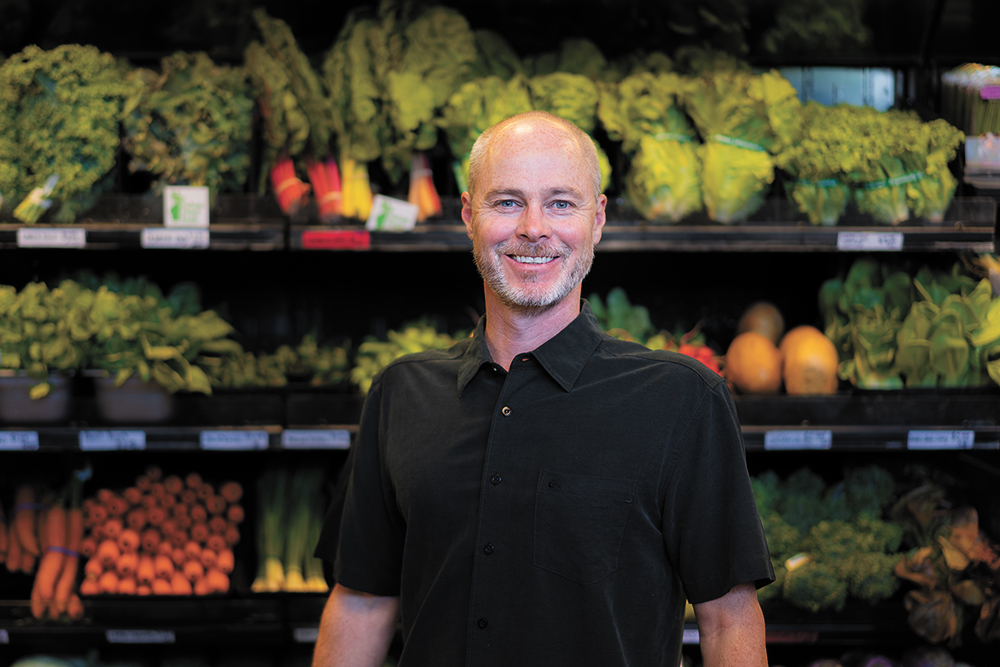 It is clear that we are no longer living in the heyday of the mom-and-pop shop, and rather are deep in the digital age. Why go away from home to shop when you can have groceries delivered to your door? It may sound cynical, but it’s the battle waged daily by the Tahoe businesses that provide the everyday items locals need, like home goods or produce. Here local business owners explain how they compete for your dollars, and why convenience and lowest cost don’t always equal the best buy.

For many local business owners, it’s all about that personal connection that is unique to a mom-and-pop shop. That’s what they say sets a local business apart from the big chains, and is a large reason why customers keep coming back.

Gary Romano, owner of Sierra Valley Farms in Beckwourth — just north of Sierraville — faces an uphill battle each day. The Sierra is not a very hospitable growing area, he says; the 5,000-foot elevation brings cool and rapidly changing temperatures and a soil that can only nurture certain crops. But he can pick a batch of carrots in the morning and get them to a Truckee restaurant by noon, he says, which is about as local as it gets, and he has a loyal following among the produce buyers across North Lake Tahoe.

Plumas Bank has been in Truckee since 2001 — the company got its start in 1980 in Quincy — and its branches only exist in Northern California and Nevada. Since Plumas is a local bank, its patrons’ money stays in the community through local lending and donations to community causes.

“We’re fortunate that we live in a community that values that personal connection,” says Elizabeth Wainscot, business relations officer. “We’re going to take the time to know you, and what it takes to do business here. We’re living in this community and understand the struggles that businesses and consumers have.”

Mountain Hardware and Sports President Doug Wright estimates that his company donated upwards of $100,000 to the Tahoe community in 2017, which he says is possible through the store’s unique employee-owned structure. Customers value the tangible appreciation the store has for its employees and its community, and it shows in the knowledge, attitude, and tenure of its workers. Wright says most of Mountain Hardware’s 30 employees have been with the company for at least 10 years.

At New Moon Natural Foods, owner Billy Griffin says that it’s a personal touch that brings customers through his doors. His staff is educated to deal with customers’ unique circumstances, needs, or desires — for example organic, whole foods for people with food allergies.

“We don’t treat customers like a monolith, we treat them individually,” Griffin says. “We focus on the customers themselves, we get to know their names, their families. We’re all a part of the community; you don’t get that when you shop at a large corporation.”

When it Comes to Convenience and Cost … It’s Complicated

“Everything is with apps now,” Romano says. “Now with Amazon and Blue Apron and home delivery, people are going more toward convenience versus quality. My sales for restaurants were twice as much seven to eight years ago.”

Romano says that most chefs choose not to deal with small farms, instead opting to stick with a large distributor. The product may be more generic, he says, but they know that their orders will always be filled. At the end of May, Romano says he had fallen two weeks behind, because of a cold snap. He had to skip the Tahoe farmer’s market circuit that week. It was a stark contrast from the beginning of the month, when he found himself two weeks ahead of schedule due to the stretch of warm temperatures in the Sierra.

Griffin says he knows New Moon trends pricier than Safeway, but he tries to be as economical as possible for the benefit of the average Truckee resident. However, he won’t carry a subpar product just because it would be more cost-effective.

“We really try to give people bang for their buck,” Griffin says. “People walk in and find local lettuce, and say ‘Wow! That’s kind of expensive,’ but have you tasted it? You get what you pay for.”

Griffin, like Romano, says that online shopping is creating a cultural shift that works against smaller businesses. Even Whole Foods in Reno has begun a delivery service, says Griffin, which targets his clientele specifically.

Doug Wright agrees that in addition to the large home improvement stores in Reno, ecommerce is where he feels the competition.

“There’s always going to be people who might use the brick and mortar to test-drive stuff, to try on shoes, and then go home and order online,” Wright says. “It may save them a few dollars, but it doesn’t do anything for the community they live in.”

Banking is not something that people often think about changing, Wainscoat at Plumas says, so to bring in new customers, they have to make an effort to educate the community on what makes Plumas different, and why it’s worth the hassle to switch. National bank chains are also much more risk tolerant, says Shelly Wright, branch manager of Plumas’ Truckee branch. This translates to the consumer in the terms of the loans they can offer. But what those banks offer in rates, they lack in customization.

Drawing in the Customer

In some ways, consumers have wisened up over the past decade and have seemed to pay more attention to where they put their money. Wainscoat says that the 2008 recession was a “catalyst” for people being more discerning about with whom they do business. “They realized they had power and a voice in where their money was being spent,” she says. And Plumas is a go-to for many local businesses in Truckee, because of the unique skill set its staff has developed over its many years in business here.

“Our communities are entrepreneur-driven,” Wainscoat says. “There are a lot of people that, when they started their businesses, came across obstacles they didn’t expect. With our experience, we help them with the knowledge we learned from other clients.”

But for Romano, he actually sees people moving in the opposite direction, away from small farms and toward delivery meal kits and buying organic produce from Costco.

He says that when you taste his produce, you can immediately tell the difference — Romano calls the flavor of his arugula “off the charts,” and his produce lasts longer than store-bought, since less time transpired from the farm to the fridge. But the problem is getting people to care about taste and longevity over trying to find the lowest-priced product. That’s why Romano hosts events on his farm like dinners and blues concerts, and is a big proponent of the face-to-face interaction of the farmers market.

“What’s going to save us is that personal contact of knowing where your food comes from,” Romano says. “We have to somehow convince people that that’s important.”

Doug Wright agrees that providing a rotating roster of quality products and an unbeatable customer service experience is the way to get customers in the door.

“We need to stay relevant to stay in business,” Wright says. “It’s one of our core values: embrace change. We’re always looking for new items and unique things. But we don’t want disposable fishing rods. I don’t want to walk into Walmart and find the same stuff we sell.”

Griffin agrees, and says that if there’s one piece of advice that he could give small business owners, it would be to “walk your talk,” to figure out what makes you unique, and then put that front and center.

“Ask yourself, why are you different?” says Griffin. “Why should they shop with you? And then go be that, go live in that world, and the people who connect with you will come to your door. But if you’re trying to be everything to everybody — low price, high quality, retail, online — you wind up diffusing yourself to much. Make your business feel like a person, so that when another person comes in, they say, ‘Hey, I like that guy.’”

The Business Side of Shopping Local
12:00 am

The Business Side of Shopping Local
Community
7:00 pm

The Business Side of Shopping Local
Arts & Culture / Music