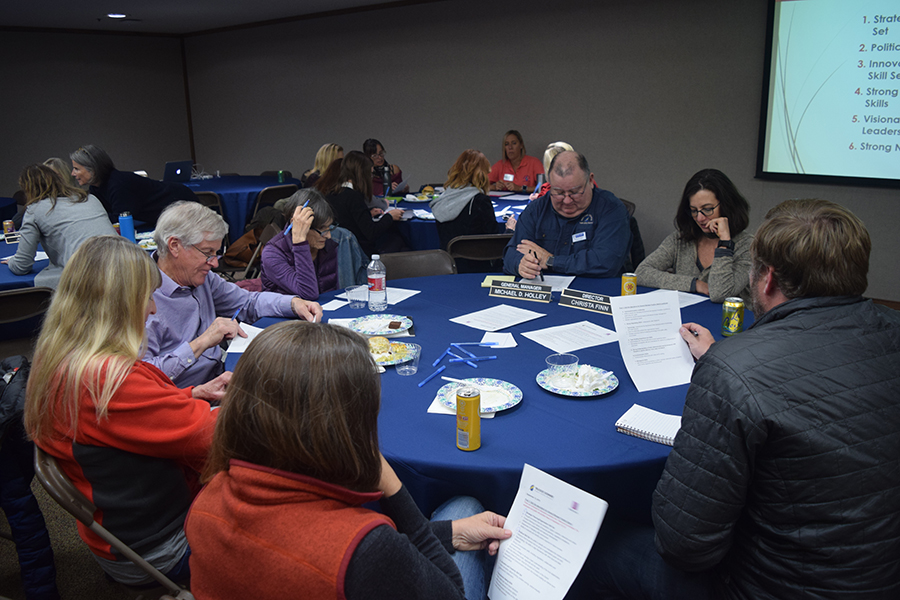 With Michael Holley’s recently announced summer 2020 departure as general manager for the Truckee Donner Public Utility District, an unprecedented community-oriented plan for his replacement has begun.

On Sept. 18, the public was invited to a workshop focused on prioritizing skillset competencies for the future GM. Holley, who was present, boldly stated that the new head of the TDPUD needs to be a better version of himself.

“The skillsets I have are not in totality enough to take us into the next [level],” Holley said to the room of community members, elected officials, and notable agency representatives such as Truckee Fire Chief Bill Seline, Truckee Chamber of Commerce President and CEO Lynn Saunders, and Nevada County Supervisor hopeful Hardy Bullock.

“Ultimately, what’s going to happen, statistically, we’re going to take our answers tonight and bake them into the general manager’s position description for the next GM,” Holley said.

The public’s “answers” referred to their top five choices of ideal GM qualities — of 11 hard attributes (such as strategic planning, innovation, understanding technology) and 12 cultural skillsets (including adaptability, integrity, and initiative). The skillsets were identified and defined by a TDPUD board-appointed ad hoc committee, led by Pamela Hurt-Hobday of Pamela Hurt Associates.

“When you think about the leader of this utility district and what will happen over the next five to eight to 10 years,” said Hurt-Hobday, “it’s really important to the board to look forward … [for] somebody [to be] politically wise and astute and have different skillsets than we have today, and take us into the future.”

During the Wednesday night meeting, the public highlighted such qualities as transparency, experience in modern management, and amenability to a wide range of ages.

The effort to prioritize future skillsets is three-fold: the TDPUD executive leadership team (composed of department heads within the utility district), TDPUD staff, and the public each prioritized the proposed hard and cultural skillsets. The aforementioned ad hoc committee will review consensus next week and present the whittled down preferences to the TDPUD board on Oct. 2. These board-approved skillsets will be heavily weighted during the interview process.

Additional key dates for the general manger succession/transition timeline are listed below: