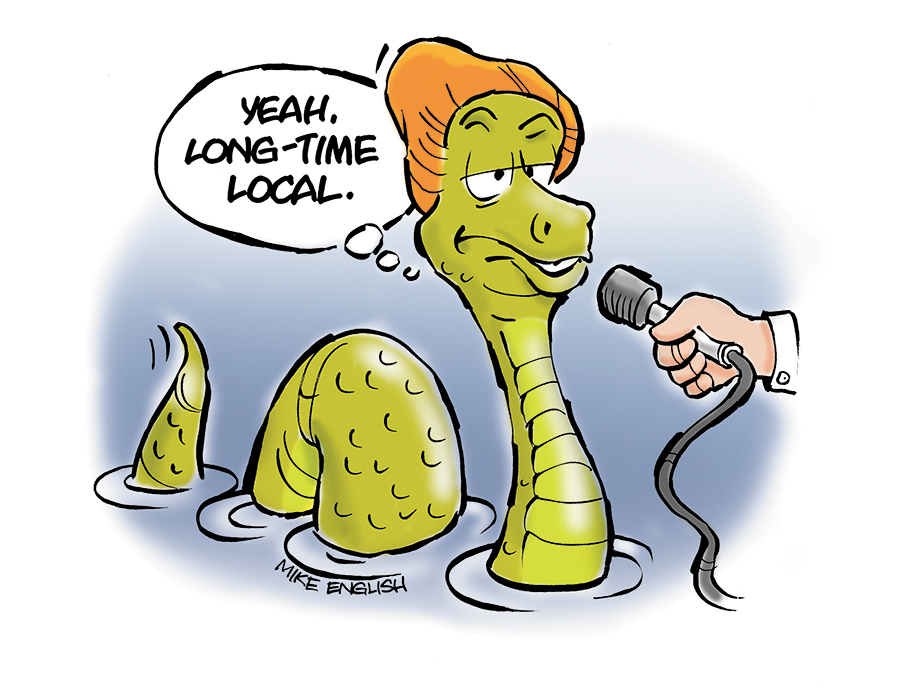 What is the origin of the Tahoe Tessie myth?

Many stories of Tahoe’s mystical creatures are recent, and Tessie, as she is recognized today, fits that category.

It is often stated that Tessie has roots in Washoe culture and that settlers encountered legends of the beast in the 19th century. Tales of Water Babies that live near Cave Rock, and Ong — explained below — are better documented. Tessie, in her modern incarnation, is reported to be similar to a dinosaur, an appearance that may have been influenced by Nessie of Loch Ness fame. Sightings have been reported since the early 20th century and continue to flourish each summer. As with most lake monsters, some people truly believe in her, while to others, Tessie is only spoken of with tongue planted firmly in cheek explained away as a giant sturgeon. For the most part, she is a friendly figure often seen around the lake in the form of signs, logos, advertisements, and a book series.

Tessie may be a fairly modern creation, but many lake monsters have an ancient lineage. The great bird Ong of Washoe Legend is just such a creature.

In times past, the Washoe came to Lake Tahoe in the summers to gather food. Knowing of the giant, man-eating bird Ong, they usually stayed in groups, close to their encampment. One day, a young man who was preoccupied making arrowheads from obsidian, called paçaga, wandered too far from camp. He failed to hear the cries from his people and was suddenly snapped up in the talons of Ong. The great bird took the man to its nest in the middle of the lake, which already contained the half-eaten remains of another victim. As Ong set about devouring the remnants of his earlier meal, the young man began throwing pieces of paçaga into the bird’s mouth when he threw his head back to swallow. Soon, the shards cut the throat of the beast and he died. The young man then cut off one great wing to make a boat and a feather for a paddle to return to shore.

At Tahoe Maritime Center, Tessie and Ong are alive and well in the art of Tahoe locals. The center’s newest exhibition, “The T-Files: the Search for Tessie,” features the stories of mysterious aquatic monsters found  in lakes, rivers, estuaries and coastal waters all around the world.

Stories of a lake monster in Tahoe go back about 100 years, but the name Tahoe Tessie is actually only about 43 years old — and copyrighted. Kings Beach resident Bob McCormick told Moonshine Ink that he dreamed up the name on a sea kayaking trip with a buddy in 1975, and the story of Tessie evolved around the campfire that night. McCormick eventually found an illustrator, and published the book in 1984.

Since then he says he’s sold about 110,000 copies, and even operated a gift shop in Kings Beach based around the lake monster for about seven years. McCormick says he has an idea for another Tessie book also involving the Washoe legend of Ong that has been swirling about in his imagination, and might just make it on the page one day. ~ SS