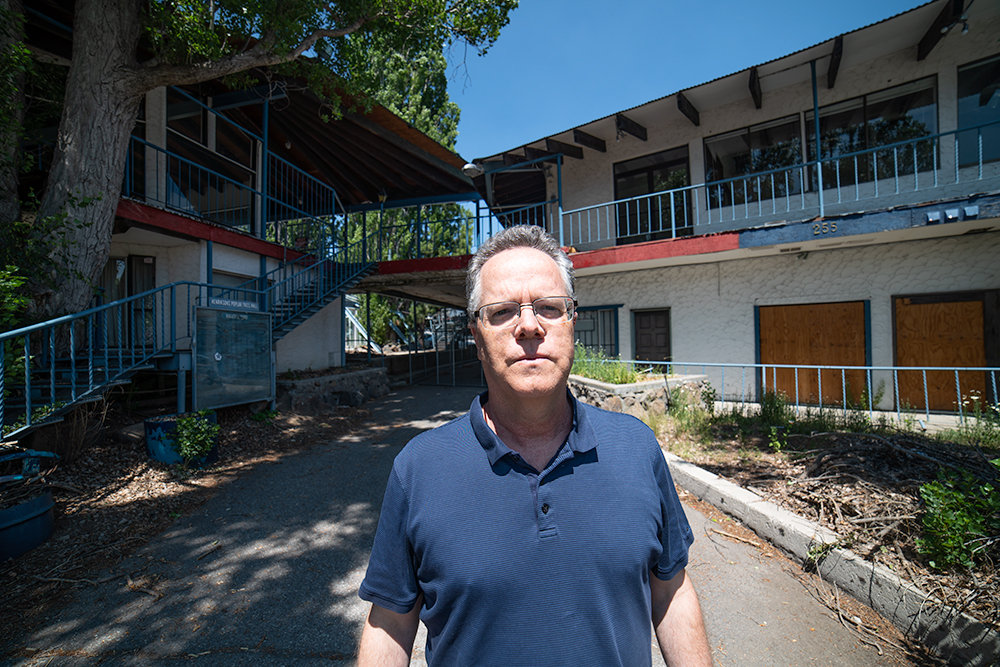 The $60 million planned boutique hotel that would be Tahoe City’s first major hotel in more than 60 years is facing a second lawsuit. Five months after settling the first one (see CEQA Lawsuits: Public Good or Private Gain? Sept. 2017), Kila Properties, developer of the Tahoe City Lodge, was sued again, literally days before the rundown Henrikson building was set to be demolished; this time by the family that owns the neighboring Bechdolt building. At the heart of the lawsuit is a 68-year old easement that the family claims the hotel does not have the right to use. But to community leaders, the lawsuit represents much more than one party’s grievance against another; they worry that it threatens the core of Tahoe City’s revival and could discourage developers from investing much-needed funds on the North Shore for decades to come.

The lawsuit against Kila Properties was filed May 2 by Sierra Northwest Properties, a holding company for assets owned by the Rudnick family. The three Rudnick children inherited the Bechdolt building, the Truckee River Raft Co., and partial ownership of the Bridgetender Tavern and Grill (which sold in 2012) after their uncle Nick Fuller passed away in 2008. The lawsuit claims that the hotel project will overburden the easement with traffic and go beyond its original intent of ingress and egress, in addition to taking away roughly 12 parking spaces from the Bechdolt building.

The easement, which is 50 feet wide and 100 feet long and extends from the street toward the golf course in between the two properties, was granted in 1950 for right-of-way, road, and utility purposes. The deed is vague, save for one stipulation: No structures are allowed to be constructed on the easement except for a sign.

The Rudnicks oppose the fact that their eastern driveway, which is part of the easement and currently accesses both properties, is designated as the hotel’s main entrance.

“The easement was never designed to have 300 to 400 cars a day going in and out of it,” said Sam Rudnick, Fuller’s half brother, who is part of Sierra Northwest Properties. “How are our people going to access their businesses and parking? I don’t understand how they can develop the project without having to build it on their property but by accessing our property … I’ve never seen a development where they borrow their neighbor’s property.”

However, Samir Tuma, CEO of Kila Properties, which purchased the Henrikson building in 2013, said he intends to use the easement for exactly its stated use — ingress and egress — and that the only thing that will be built in the easement are curbs, gutters, and sidewalks. The driveway in dispute will become the hotel’s main entrance, according to Tuma, but one reason for this is because Placer County, as part of its Tahoe Basin Area Plan, wanted to eliminate driveways and curb cuts and create shared use entrances.

“We are perfectly entitled to do that [use the driveway] because the easement allows us to,” Tuma said. “[The Rudnicks] are simply wrong about that. The easement language doesn’t put any restrictions on the use of the driveway for road and right of way purposes.”

Discussions and negotiations over the slice of land have been going on for years. Tuma said he offered to relinquish part of the easement back to the Rudnicks, along with free parking spaces on his property and free snow removal, in addition to paying for a reconfiguration of their parking, but received no response.

The Tahoe City Public Utility District, which is responsible for maintenance of the easement since it acquired the golf course in 2012 and would receive a new clubhouse as part of the hotel project, also tried to negotiate with the Rudnick family. According to Cindy Gustafson, TCPUD general manager from 2008 to 2017, the district discussed the possibility of a partnership purchasing the easement or even the entire Bechdolt property with Kila Properties, but the parties could not reach an agreement over a price tag.

“We were all trying to find potential solutions,” said Gustafson, who is now CEO of the North Lake Tahoe Resort Association.

The easements that are in dispute were created decades ago when one extended family owned nearly all that property, Gustafson says, and were for the benefit of what is now the Tahoe City Lodge property and the golf course. “In their defense, the Rudnick family probably didn’t know all the details about the easements since they came to own the property without the normal due diligence associated with acquiring commercial property,” she said.

But the family, who says they tried to work with the county, the public utility district, and Tuma to no avail, believes this is a matter of private property rights.

“We have to defend our property rights,” Aaron Rudnick said. “We are not willing to lose our property or our parking over this.”

The lawsuit could impact not only the viability of the Tahoe City Lodge, but also the economy of the North Shore. For one, Kila still cannot begin to build. It lost the 2017 construction season after being sued by the Davis-based California Clean Energy Committee on environmental grounds, a lawsuit that was settled last December. With this second suit, Kila has taken a major financial hit, and plans to countersue the Rudnicks, according to Tuma.

“As a result of their actions I am going to incur damages in the millions of dollars and we will be seeking those damages from them,” Tuma said.

The Tahoe City Lodge is now at risk since investors have told Tuma they will not lend money with a lawsuit pending, he said. A major concern for Tuma and other community members is that, even if the lawsuit is resolved in a year or two, no one knows what the capital markets and lending environment will be like in 2019 or in 2020, not to mention rising construction costs. This only adds to the uncertainty of the project’s future.

“I am not very confident at all at this point,” Tuma said. “I think it’s devastating. I always said that our project needed to be the first of several to really revitalize the town. Any investor down the road will say that if this project couldn’t get done, then what project can? It will have an enormous chilling effect on future projects and investors.”

Gustafson agrees. She worries that North Tahoe, already an expensive area to build, has earned a reputation as a place where developers are sued regardless of county and agency approvals. The Tahoe City Lodge was unanimously approved in 2016 as part of the Tahoe Basin Area Plan by the Placer County Board of Supervisors and the Tahoe Regional Planning Agency, and received a hard-to-come-by endorsement from the League to Save Lake Tahoe. Gustafson points to JMA Ventures as another example. JMA’s planned expansion of Homewood Mountain Resort, which, like the Tahoe City Lodge, received unanimous approval from various government entities in 2011, including the TRPA, was sued and has still not broken ground.

“This project [Tahoe City Lodge] had gone all the way through the regulatory environment with huge support,” Gustafson said. “It was seen as a balance and a great project for the community, and a lawsuit happened. This sends a message to other developers that it’s risky to invest in Tahoe, and you may never get a return, and it might just be lost money.”

Gustafson notes that one goal associated with the public money invested in Tahoe City over the past few decades — for sidewalks, Commons Beach, bike trails, and the new Fanny Bridge and Highway 89 realignment — was to spur private investment. However, the only major private project to come forward in all that time has been the Tahoe City Lodge, whose intent was to provide something sorely missing from Tahoe City — high quality lodging, she added.

Gustafson says the town misses out economically when people opt to stay at the Resort at Squaw Creek or the Ritz-Carlton at Northstar because Tahoe City doesn’t have a four- or five-star hotel.

“That means less revenue when you don’t stay in the community,” she said. “You can shop in Truckee or Squaw; you don’t need to shop at the lake.”

Gustafson fears that without the hotel, Tahoe City will lose its chance to become a year-round destination instead of mainly a summer one.

“What happens [if the hotel is not built] is, the community continues as it is, and we are down to a two-month resort, and the rest of the year we can’t keep up with the market,” she said.

Roger Kahn, who owns two properties in Tahoe City and is the former owner of Porters Ski & Sports, is also worried about the town’s future if the hotel doesn’t happen.

“This is really an opportunity to do a major facelift in town,” he said, noting that the development of the Tahoe City Lodge would encourage other property owners to fix up their buildings. “I don’t know if [the Rudnicks] are willing to understand what they are doing to the community, because if they did they would come up with a compromise.”

But the Rudnicks say that all attempts at compromise have failed and they are now at an impasse. They also disagree with the community that if the hotel doesn’t get built it will have dire consequences.

“We are all in support of getting rid of the Henrikson building, but not at the cost of local citizens who have been here for years,” said Aaron, who points to a new business in Tahoe City as proof that the town can prosper without the hotel. “Look at the Pioneer Cocktail Club coming — I don’t think this is going to shut down the town at all.”

Tuma said that despite two lawsuits, two construction seasons gone, and millions of lost dollars, he still has the desire to make something happen.

“We will lick our wounds and do something with the property,” he said. “It’s always been a dream project and a project of passion to help the community.”