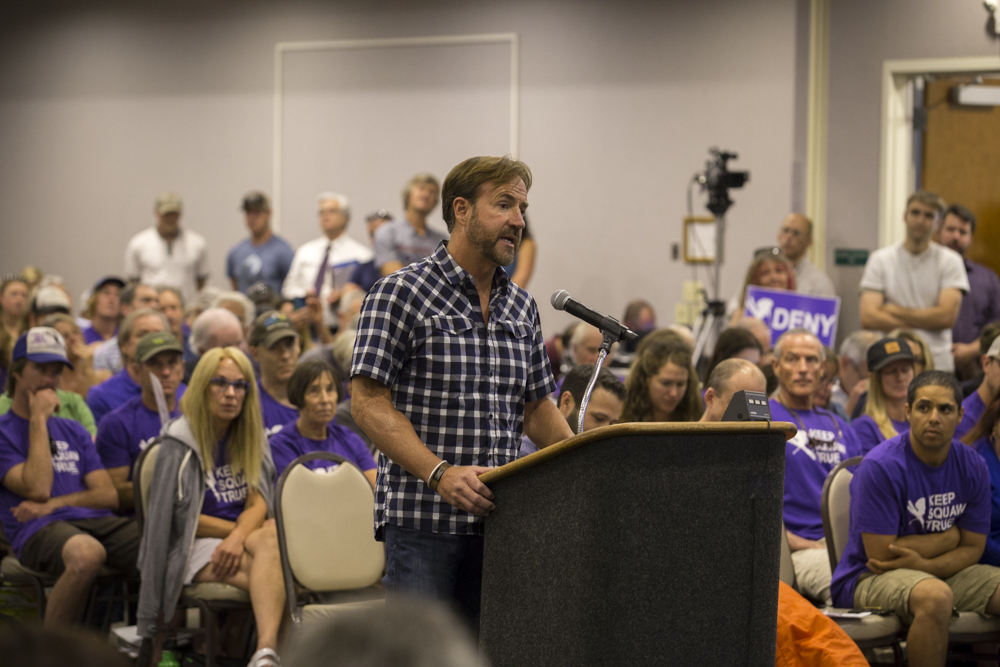 After a five-year process, numerous public meetings, and 400 workshops and outreach efforts held by Squaw Valley Ski Holdings, and despite an impassioned plea to deny the project from the majority of attendees at yesterday’s Placer County Board of Supervisors meeting, the governing body voted 4-1 to approve the Village at Squaw Valley Specific Plan. Opponents, however, say this is not the end of the road for their fight for a smaller sized project. Big eleventh-hour news also was revealed yesterday that the California Attorney General’s office settled with SVSH over concerns of an inadequate environmental analysis, clearing a potentially major hurdle for the ski area.

Around 500 people attended the nine-hour board of supervisors meeting on the fate of the 94-acre Squaw Valley Village project — which includes 850 units with 1,493 bedrooms and more than 20,000 square feet of commercial space, along with a 90,000 square foot Mountain Adventure Camp — dividing the room at the North Tahoe Event Center into two visible camps: supporters of the project wearing white squawtomorrow.com shirts and hats sitting primarily on one side of the room, and opponents sporting purple Keep Squaw True shirts and waving signs that read “Deny This Project” on the other.

Andy Wirth, CEO and President of Squaw Valley Ski Holdings, emphasized that the project has been significantly reduced from its original design and reiterated one of the main arguments for the project — that a new village is necessary to keep the ski resort competitive.

“The plan has addressed all aspects of an underdeveloped base area, which is a sea of asphalt. It represents a 62% reduction in bedrooms from the 1983 Squaw Valley General Plan, and we removed half the density based on community input,” Wirth told the supervisors. “The variety and quality of lodging is sorely lacking … Please allow us the opportunity to be relevant and competitive in this industry.”

The 1983 Squaw Valley General Plan allowed for 3,085 bedrooms. This means that 50% of the plan area holding capacity will be permanently retired. SVSH also cut the development by half since its original inception and reduced building heights. The Mountain Adventure Camp, one of the most controversial aspects of the project, was shrunk from 120 feet in height to 96 feet, making it the development’s tallest building.

These facts seemed to influence the supervisors’ decision.

“The 1983 anticipated build-out was far more intense than what they are asking for today,” Supervisor Kirk Uhler said. “The [1983 general plan] envisioned additional lodging to implement a four-season destination.”

During eight hours of public comment, a group of five Squaw Valley residents presented their analysis for a 65% reduced project. They said they were answering a call by Placer County Supervisor Jennifer Montgomery, who represents the Tahoe area, to not just say no to the project, but to come up with an alternative they could live with.

“Squaw Valley is a special place. It is inspiring. It has a special relationship with the natural environment, and that is what we are trying to protect with a smaller project,” said Bob Barnett, one of the “Gang of Five” as the supervisors dubbed them.

Their reduced size alternative would build 976 bedrooms instead of 1,493 and retain the entire Village Core, including the full-sized Mountain Adventure Camp, as well as replacing the two parking structures with surface parking.

“A smaller project can have an internal rate of return at least as good if not better than the proposed project,” said David Stepner, one of the ‘gang.’ According to Barnett, the reduced plan would still yield a 12% to 15% rate of return.

However, SVSH’s lawyer Manley ripped apart the feasibility of a reduced project, noting that infrastructure costs remain the same even with a smaller project, and that important benefits of the plan, like restoring Squaw Creek, may no longer be feasible. He noted the Gang of Five plan also didn’t include enough parking.

“There is no such thing as half a fire substation … Putting in a trunk sewer line at 50% capacity does not cost half as much,” he said. “The most environmentally sensitive parts of Squaw Creek may not get restored under this plan.”

SVSH is responsible for donating the land to develop a fire station at the west end of the valley and paying 100% of construction costs.

Most commentators, however, took a more emotional route. One of the most moving moments occurred when eight teenagers took to the podium.

“Don’t believe them when they say kids want a water park in the mountains, because we don’t,” 14-year-old Kate Gaffney said. “It makes us sad that visitors would experience a water park because the mountains can be so much more.”

A water park, which is one of the proposed 50 uses of the Mountain Adventure Camp, was the focus of most speakers’ ire.

Others lambasted the project as a whole.

“This is cookie-cutter crap that has been picked up out of Whistler and plopped into this community. We need to be thinking about 30 years from today, not 30 years ago,” West Shore resident Renee Koijane said, referring to the 33-year old Squaw Valley General Plan. “This project is oversized. It is a Mc-Ski resort, oversized and unprogressive.”

Supervisor Uhler said he did not understand the public’s issue with the Mountain Adventure Camp nor what was meant by the “Keep Squaw True” catchphrase of Sierra Watch, a nonprofit that has been one of the most vocal opponents of the Squaw project.

“It’s a building. Whether it has a water feature or rock climbing…I don’t get this revulsion to it,” Uhler said. “Does Keep Squaw True mean when we waited in line 40 minutes for the Gold Coast lift? Was it starring at a collapsed ice rink? I can guarantee you that if Alex Cushing were alive he would be fighting for every one of those 3,085 units. We have a project that is getting dangerously close to not serving its original purpose.”

Supervisor Montgomery, while applauding SVSH for listening to the community and cutting the size of the project, said after listening to her constituency she had to vote against the development.

“The project is significantly better than when we started out … but I have to represent the people who elected me, to be their voice, and the majority of people I have talked to do not support this project at this scale.”

Perhaps the biggest news beside the approval was that over the weekend the Attorney General’s office and SVSH had reached an agreement. The Attorney General had written a 15-page letter in August expressing concerns that the project’s environmental impact report did not adequately analyze impacts to Lake Tahoe. One of the authors of the letter, Deputy Attorney General Nicole Rinke, was a Tahoe Regional Planning Agency attorney from 2007 to 2011.

Although SVSH is not subject to TRPA regulations since the Squaw Valley resort is outside the Basin, the company agreed to voluntarily pay $440,862, or $295 per bedroom, to the agency’s Congestion Mitigation and Air Quality Program. SVSH also agreed to forego a credit toward the $2.9 million to the regional transit fund as part of the development agreement.

The TRPA, however, said it was not party to negotiations between the Attorney General and SVSH. “We’re still working to understand and research what the provisions and agreements are, and what it means,” said TRPA spokesman Tom Lotshaw.

Manley read a letter from the Attorney General’s office at yesterday’s hearing: “This will suffice to address our concerns about air quality and we will not be filing litigation.”

Despite these two major setbacks to Sierra Watch’s opposition to the development, Mooers said the fight would go on. He noted that Sierra Watch has been down this road before when it successfully sued Placer County to stop the 2003 Martis Valley Community Plan. After a judge halted development, Sierra Watch and other conservation groups reached a series of agreements with the developer that resulted in the preservation of Waddle Ranch, which was intended for 1,000 units, and put a cap on growth at Northstar California. That process took about two years.

Last week, Sierra Watch, Mountain Area Preservation Fund and the League to Save Lake Tahoe filed a lawsuit against Placer County, claiming its approval of Martis Valley West, a proposed Tahoe development a few miles east of Squaw Valley, was illegal. Mooers said to expect a similar lawsuit from Sierra Watch next month over the Squaw Valley Village approval. Groups have 30 days to file a lawsuit after final approval is filed, which Mooers said usually happens within one week.

“The Attorney General letter still stands. It was good to see the state sticking up for Tahoe, but [the agreement with SVSH] really doesn’t do anything to what we’re doing,” Mooers said. “This is not the end of the road. People should dig in for a long ride.”