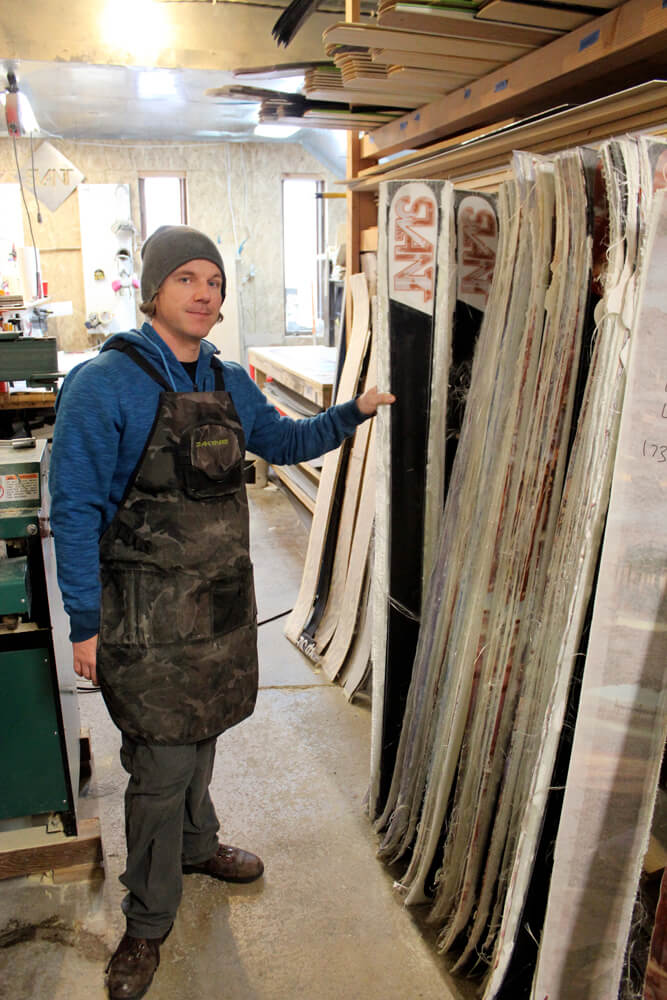 In late November, snow is hammering at lake level at more than an inch per hour, temps are bone-numbing cold, and it’s not yet Thanksgiving, making for a fine day to put a finger on the pulse of two of Tahoe’s ski and snowboard companies.

I first visit Josh Bennett, the founder of Slant Skis, the only ski or board company in the Tahoe region that manufactures in California. Then I meet Jen Gurecki, founder and CEO of Coalition Snow, the first ski and snowboard company in the world that was founded by women.

Talking with these two heads-of-companies, the accumulating flakes inspire smiles on their faces to ski the next day, hope for a big season, and even a bit of optimism for the sustained success of their brands. They are growing every year, but are having to constantly adapt to the challenges of the ski and snowboard industry.

The Sisterhood of Shred: Coalition Snow

Coalition Snow, the 2-year-old, Tahoe-based women’s ski, board, and apparel company, was born out of a lack of women’s ski gear that worked for those beyond the intermediate phase. Founder Jen Gurecki thought this was a bunch of nonsense.

Coalition started think-tank style in the winter of 2013-14, with Gurecki bouncing ideas off friends, studying ski industry market trends, and brainstorming ways to make a women’s-exclusive ski company doable. Buoyed by the popularity of women’s advancements in skiing such as the 2014 film Pretty Faces, she knew things were going in a good direction.

She reports that all of the women she spoke to were supportive of the idea, and while some men thought it could work, not all of them did. She took this feedback not to mean that the male gender was intentionally down on a women’s company, but as valuable insight into how the market operated and the stark reality of such an undertaking.

“There is definitely a reality of how hard it is,” Gurecki said. “But just because something is hard, do you not do it?”

In May 2014 Coalition Snow incorporated, with winter 2014/15 being the first for selling gear, exclusively online. This winter, the company’s sales goal is to move 200 units, but the overarching goals extend far beyond a sales number.

“The company is about showing female empowerment in the ski industry, as we have four women at the core of the company,” Gurecki said. “Women can be perfectly happy on whatever equipment they have and still see the importance of our company.”

Coalition seeks creative ways to pull in funds. In April 2015, they completed a Kiskstarter campaign that raised $31,000, which allowed them to go into production for this winter season. In September 2015, Gurecki won the Nevada Business Pitch competition where she delivered a two-minute pitch on the company’s importance and relevance. That victory netted $5,000 cash.

Gurecki was formerly the co-owner of Tahoe whitewater rafting company Irie, and is the owner and founder of Zawadisha, where she coordinates microlending to Kenyan women (to read more, see p. 28). The latter work experience led her to launch the first ever lending program for potential ski buyers, and gives customers the opportunity to forego relying on credit cards for the trust of a community. She admits it’s risky, but it if a buyer can put $200 down and have three people vouch for them, they can get new skis or a snowboard.

The company is run out of homes and collective workspaces, and they manufacture in Japan. They are looking into domestic manufacturing options, and have found a factory in Seattle for production of a specialty line, where they will manufacture an all-mountain ski for the 2016-17 season while looking into more options.

Despite the presence of large-scale, big budget ski empires with decades of experience, the largest competitor she cites is not another company.

“We launched during the worst winter in recorded history. That didn’t help. Our greatest threat to success is climate change,” Gurecki said.

She emphasizes that being pro-women does not mean being anti-men.

“We’ve never looked at it that way, and have utilized and appreciated the feedback from guys,” she said. “We just recognize the strength in women.”

Bennett, 33, came to Truckee in 2006 from Michigan’s Upper Peninsula and got straight to it: Collecting the tools and hardware needed to build his own skis. He had a background in coaching, carpentry, and ski tuning — all transferrable skills that are needed to run a small ski company.

“We began in a garage in Truckee that I rented from Shane McConkey,” Bennett said. “But at that point it was just for my friends.”

In 2011, Slant moved to its current headquarters just north of Tahoe City on Highway 89 where the company manufactures skis on site, a rarity in the Golden State.

Running a ski business in a California mountain town means the challenges of high rent, restrictive taxes, and lack of available real estate. These factors have contributed to all other regional ski and snowboard companies being based outside of California. Ski companies Moment and Praxis are based in Reno and Incline Village, respectively, and snowboard company Smokin manufactures in Reno. Ski company 4frnt started in Tahoe, but relocated to Salt Lake City in 2005, and Coalition Snow bases its operations in California, but are an incorporated business in Nevada.

“It’s impossible to expand in California, and we have to be really economical with the usage of our space,” Bennett said. “Business-wise it doesn’t make as much sense, but we are 10 minutes from our testing grounds, and those testing grounds are Squaw and Alpine.”

A graphics press sits in front of the front desk next to the door, with a huge printer behind the desk that is churning out prototype designs for Actual’s graphics as I walk in.

“It’s currently like Tetris. We are at maximum capacity with our current space,” said Jack Young, the chief operating officer at Slant, and the only other full-time employee outside of Bennett.

But keeping a presence in North Lake Tahoe has big kickbacks. Bennett and Young say their location on the road to Squaw/Alpine increases visual recognition, and as most of their athletes live in Tahoe, they receive near-instant feedback on the never-ending process of refining and improving ski design. Their designs range from all-mountain to powder skis, with three women’s specific skis.

“Our best customers are our full-time Tahoe residents,” Bennett said, who adds, “but we also get support from vacation people and see a lot of people respecting us around the world.”

The company has continued to grow since its 2007 inception. By 2009, they sold 25 pairs of skis, a breakthrough for the time. This season, Bennett’s goal was to sell 150 pairs by the end of December, and then to increase that number the following year by 100 percent.

Bennett highlights an incentive that once ski season winds down around April, customers can secure a pair of next year’s skis by putting $100 down, plus receive a 40 percent discount.

“We are essentially offering next year’s new skis for last year’s prices,” Bennett said. “Not many companies are doing that anywhere.”