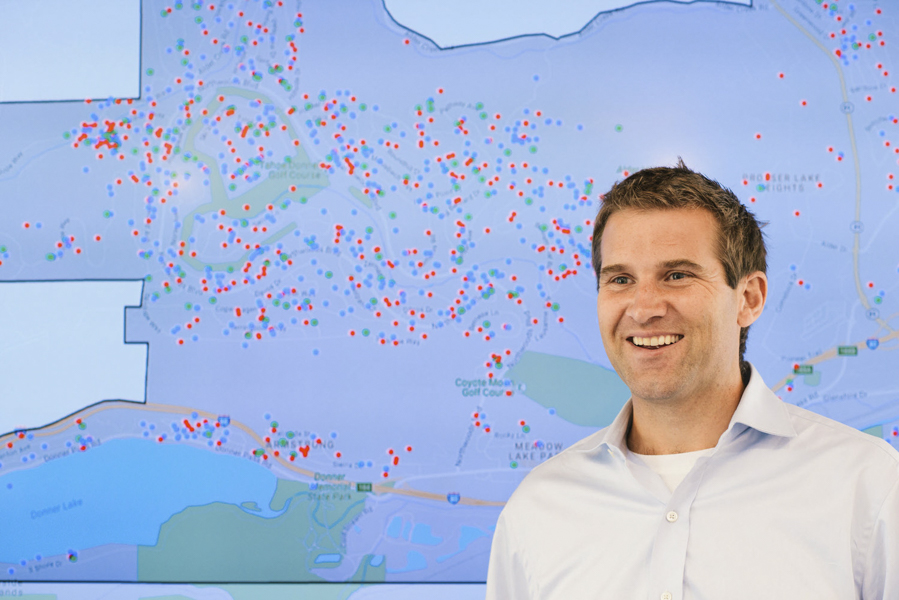 Short-term rentals have become a linchpin component in the housing conversation, and communities across the west have had very different ways of facing the issue. Jackson Hole, Wyoming recently banned short-term rentals, San Francisco has adopted a series of different regulations, and Mammoth Lakes only allows short-term rentals in specifically zoned areas. Last year, the Town of Truckee searched for a solution and reached out to Ulrik Binzer and his newly founded company Host Compliance and Placer County followed suit shortly after.

Host Compliance analyzes a set of 17 different public data sources to investigate where properties are being used as short-term rentals so that the town can contact them and bring them into compliance. How does it work? We asked Binzer.

Where did the inspiration to found Host Compliance come from?

I founded the company in 2015 as a reaction to a problem that I was experiencing in my local community in a small town called Tiburon just north of San Francisco. I was personally renting out my house on Airbnb when I would go vacation, so I got involved at the grassroots level just trying to influence policy because I really didn’t think there was a lot of data to back up the claims of how everything was just terrible. We found that there wasn’t a good data source for that, and we also found that the cities that had put in place regulations really had no way of enforcing them, so the whole thing was really a bunch of Kabuki theater.

My theory from the get-go was that if cities have ways to enforce the rules they will end up with reasonable compromise legislation that allows short-term vacation rentals to operate in a way where it’s not necessarily a problem for the community; whereas if they don’t have the data, they end up making regulation based on fear and hearsay and anecdotes, which is generally a bad way to make policy.

So you find that strict regulations tend to have an adverse effect?

Exactly, I’ll give you an example. In Tiburon, my town, rules were adopted and a total ban on short term rentals was put in place, which I thought was a terrible policy. There was a committee I was appointed to where I said, “If you make this complete ban then people are just going to go underground, and by the way, you’re not going to get any of the tax revenue from permit fees which you would otherwise get to actually pay for the enforcement.

Then, on the front page of our local newspaper — The Ark Newspaper in Tiburon — there was literally an article that said the former mayor who was part of the committee and part of the city council that adopted the ban, is the biggest Airbnb host and had 170 stays in the camper van in his yard in the last year.

How did Host Compliance get off the ground?

I started the business in October or September of 2015, and we began collecting data, like, immediately. I hired a whole team and we started selling the product in April of 2016 and we have more than 50 customers now.

I understand Truckee was one of the first five customers. How did the Town become part of this?

That’s right. Truckee actually contacted us. They have, I think, a very thoughtful and dynamic team there that sort of realized that vacation rentals are an important part of the Truckee economy, but because of the housing issue, it is also a controversial thing. They were totally aware that there was a huge discrepancy between the number of properties that were formally registered with the Town and paying taxes, and what was actually going on.

We started doing our work and we identified something like 95 percent of the vacation rentals in the Town of Truckee, and then worked with them to send out hundreds and hundreds of letters to people who have been identified as being noncompliant.

How do you track down these people?

We only use public data sources. We often look at the online listing, and then we cross-reference that with a lot of other public data to piece together the different parts of the puzzle to identify who they are. We take screenshots of every listing every week so there is no dispute over whether the property listing was actively advertised or not. The output that the city gets is basically a list that has the address, parcel number, homeowner’s information, and mailing information.

What level of success have you found with that here in Truckee?

I don’t have the exact data, but I know from the first round of letters we had a 60 percent compliance rate. So after the first letter, either people just came in and registered, or they said “Ah, actually, I’m not renting anymore,” and they took down their listing. We check every week, so if they take down their listing and put it back up again, we’ll know that.