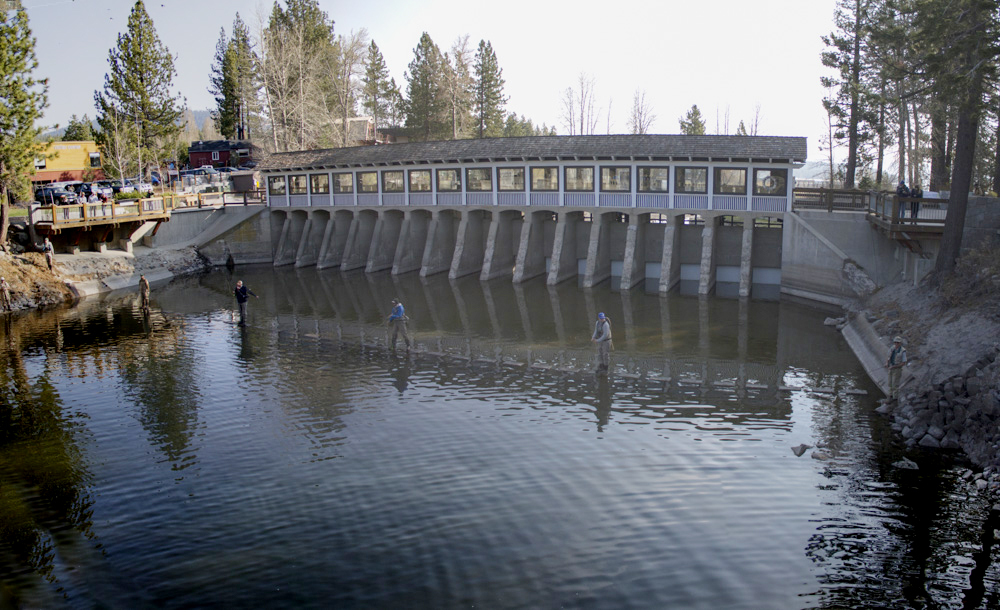 A fisherman yells out as Mike Wier, outreach coordinator for California Trout, hooks into a behemoth rainbow trout in a pool just above the Fanny Bridge in Tahoe City.

This 31-inch monster is one of roughly 40 trout that have become stranded in a short section of the Truckee River since Lake Tahoe dropped below its natural rim in August 2014. Community concern grew through the winter as the dissolved oxygen in the 75-foot stretch of water started to drop and the pool neared unlivable levels for the trapped trout.

“The habitat here is just becoming unsuitable for fish to live in, so either they die or we move them,” Trout Unlimited California field director David Lass said.

A collaborative effort between Trout Unlimited, the California Department of Fish and Wildlife (CDFW), and California Trout brought 20 volunteers to Fanny Bridge the morning of Tues., April 21. The mission was to relocate the stranded trout to the cleaner waters of Lake Tahoe, but it also offered a once in a lifetime opportunity to fish for the prized trout.

“The Fanny Bridge fish are some of the largest and oldest fish in the Truckee River system,” Weir said. “Some of those rainbows and browns ended up there on a journey upstream to spawn. Their genetics are important to this system to pass those traits along to the next generations of Truckee River trout.”

Woolly buggers, rubber legs, eggs, nymphs of every variety, worms, PowerBait, and even small chunks of bread or fish pellets on a hook flew simultaneously through the air when Lass gave the call to start fishing. Ten of the volunteers led the charge, armed with both fly and spinning rods, all eager to get a shot at fish that some had been dreaming about catching for years.

Ray O’Brien, a Tahoe local of 52 years, was one of the most outspoken citizens regarding the Fanny Bridge trout situation. He has long been a steward of the area, since swimming with the fish below the bridge as a child.

“We were starting to get a lot of people asking about the fish at Fanny Bridge, and a lot of my friends were calling my asking me ‘Hey, Ray, what can we do,’” O’Brien said.

After the Truckee River ran dry this winter, O’Brien began contacting the CDFW and created an email chain to bring more attention to the issue. Trout Unlimited became more involved about two weeks before the relocation and collaborated with the CDFW to make the event possible, O’Brien said.

An email sent by Trout Unlimited requesting volunteers for the relocation was delivered only four days before the event, and Lass attributes the large turnout of 20 volunteers and six CDFW staff to a dedicated local community and the necessary assistance of the CDFW.

“It’s such an expression of the North Lake Tahoe community,” Lass said. “People care about where they live and why they live here; in this case it’s fish. So it’s great to be able to work with the state, try to save some fish, and make sure that the impacts from the drought are somewhat mitigated.”

According to Lass, it is not the first time Trout Unlimited has worked with the CDFW to relocate fish, but it is the first time that a relocation effort has taken place at Fanny Bridge. The hook and line method of capture is unique, Lass said, with electrofishing being the preferred method for similar projects.

Electrofishing involves using a non-lethal electric current carried by portable anodes and cathodes in order to stun the fish so they float to the surface and can be netted by hand. However, the pool below the bridge would be ineffective to electrofishing due to its eight foot depth and lack of current, according to organizers.

Alternatives to hook and line fishing included moving water from Lake Tahoe into the pool in order to create a current, but according to Mitch Lockhart, CDFW state coordinator , the legal process to approve that method could take months, by which time the fish might perish.

A total of 29 trout were safely caught and delivered to the holding tank by the time the last line was cast, CDFW fisheries biologist John Hanson wrote in an email to Moonshine Ink. These four rainbow trout and 25 brown trout were each individually measured and tagged before being released into Lake Tahoe at Obexer’s Boat Company and Marina in Homewood.

“The fish were lively and active and quickly moved away from the ramp towards the deeper water and cover provided by the marina,” Lockhart wrote in an email to Moonshine Ink. “No fish were listing or belly up upon release, and we are hopeful they will adjust to their new environment and thrive.”

The trout have been given the chance to survive a devastating drought, but the problem at Fanny Bridge is nothing new. According to Lass, similar problems exist on the Walker, Carson, and Feather rivers and, because of the drought, things are not getting any better for Sierra Nevada fish.

“In one respect it was a little bit of a treat to catch one, but I’d rather not,” California Trout’s Wier said. “It’s a sign of the times, as far as historic conditions go, and how bad this drought is on fish and on our fisheries.”

Editors Note: Please remember that this relocation was a special circumstance, and at all other times of the year no fishing is allowed within 1,000 feet of the Truckee River Dam, directly above Fanny Bridge.