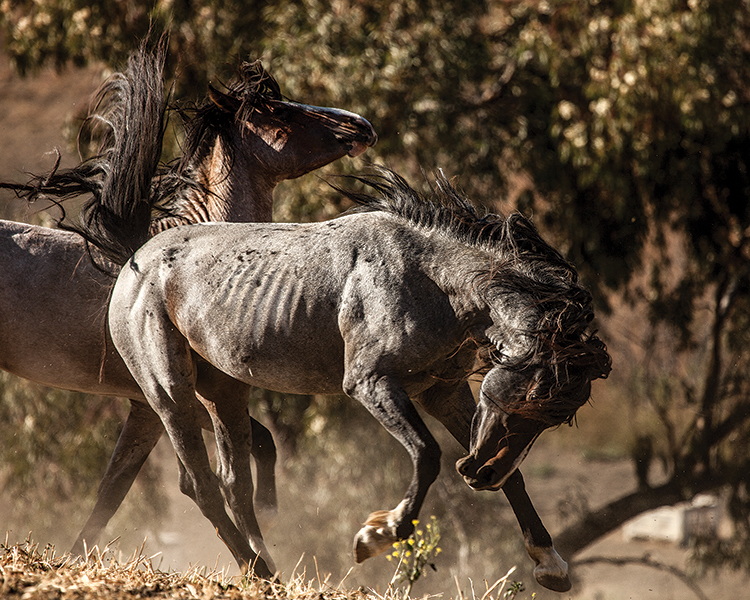 The image of wild horses on a scrub brush plain stirs the spirit of rampant Western freedom. Just as we broke free from old England, the ancestors of these animals broke free from Spain hundreds of years ago, and they have since become a symbol of the West. A symbol only means so much, however, and the volatile population growth of wild horses over the last decade has created a mire of policy issues, only escalating in recent years.

Starting Oct. 10, more than 713 wild horses to date have been rounded up by wrangler and helicopter in the eastern corner of California. The population control effort in Devil’s Garden Plateau in Modoc National Forest has a final goal of 1,000 horses to be reached by Nov. 16. Roundups like this occur regularly across the West, but this one is unique in that it will be the first time in over 40 years that “sale without limitation” of federally managed horses is on the table — meaning that 300 older horses not adopted within 60 days can be sold for any purpose, including slaughter. It’s one of the last-ditch efforts to respond to an issue that has grown steadily worse over the last few years due to overpopulation, the influx of invasive plants in formerly forageable terrain, increased development, and drought.

After receiving federal protection in 1971, wild horse populations across the country have been growing at extreme rates — as much as 20 percent a year for some herds, and the entities responsible for managing them say it has taken a significant toll on the landscape.

“We have somewhere around 3,900 adult wild horses on the territory right now, so we’re an order of magnitude 10 to 20 times the carrying capacity that the land can support,” said Ken Sandusky, public affairs officer for the Modoc National Forest, noting that the Appropriate Management Level (AML), or population the Devil’s Garden management plan has determined the area can support, calls for a maximum of 206 to 402 adult wild horses on a total area of 232,520 acres. The horses are intended for adoption, but the last resort of sale without limitation is in response to a tight budget that has been increasingly strained in attempting to address the issue.

“There is a risk involved with unlimited sale, we’re not looking for kill-buyers by any means at all — we’re actually doing exactly the opposite,” said Sandusky, who added that the risk is greatest for horses still on the range if the population isn’t controlled, due to the potential for large scale starvation due to a scarcity of resources. “We’re vetting those buyers, we’re trying to find happy homes for those horses. The idea is to get horses into private care as quickly as possible in order to limit the overall expense to the American taxpayer, and we are working really hard to find homes for horses.”

The AMLs put in place by the Forest Service — and the primary wild horse management entity, the Bureau of Land Management (BLM) — are hotly contested by animal rights advocacy group the American Wild Horse Preservation Campaign (AWHPC), which argues the allotment is subjective and influenced highly by the livestock industry. A 2013 National Academy of Sciences report stated, in the case of the BLM, “how AMLs are established, monitored, and adjusted is not transparent to stakeholders, supported by scientific information, or amenable to adaptation with new information and environmental and social change.”

“Their population limits that have been imposed by the federal government are extremely low — extinction level population limits,” said AWHPC executive director Suzanne Roy. “This is because the majority of forage on these public lands is allocated to privately owned livestock.”

Sandusky noted in response to this that the horses are far more destructive than the cattle, due to a difference in oversight. Livestock are closely managed; their owners are fined and the stock are relocated if they are found to be damaging an area — an occurrence he said “happens all the time.” Two grazing allotments have actually been pulled back in the past year according to Sandusky, who stated that the land had become too sparse for cattle to graze. He also added the horses often target sensitive riparian areas, trying to avoid inedible invasive plants such as medusahead grass that have overrun much of the formerly forageable land in the area.

While opposing the extremity of the AMLs, Roy at the AWHPC agrees that horse populations do need to be managed, but she disagrees on the method. She opts instead for birth control techniques as opposed to gather and sale. The BLM spends about 68 percent of its $81 million wild horse and burro management budget on herding, short- and long-term holding and placement into private care for horses. This is compared to $144,551 allocated to population growth suppression in the 2017 fiscal year.

For the Virginia Range herd of 2,951 wild horses on the outskirts of Reno, Roy says the AWHPC used birth control techniques such as the porcine zona pellucida (PZP) and GonaCon vaccines for mares to great success, but the project was eliminated last year. The Virginia Range herd is one of the few in the country not under federal ownership or protection, and the campaign had a contract with the controlling entity, the Nevada Department of Agriculture (NDA), to manage its horses until the agreement was dissolved last year.

“We had a team of volunteers and about a $50,000 budget and we have vaccinated more mares with the birth control vaccine than the entire BLM did with an $80 million a year budget the year before,” Roy said of the project. According to the campaign, their volunteers darted 494 horses with PZP and delivered 462 booster shots, compared to the BLM’s 452. After terminating its agreement with the AWHPC, stating the campaign had not fulfilled the terms of its agreement, the NDA board voted 8 to 1 to transfer the herd to private ownership and sent out a request for proposals to potential buyers on Jan. 30. After five months passed without applications, the NDA withdrew the request in June and the fate of the horses remains uncertain.

Lisa Dearing, who has a history of professionally photographing the Virginia Range horses, says things have been rough for the herds over the last few years, with the effects of climate change exacerbating the problem.

“By this time of year, the horses aren’t looking so good,” said Dearing. She has seen a combination of drought and increased development outside of Reno lead to thin, starved-looking mares and dead horses on the side of the road near the new Tesla Gigafactory — killed by motorists while crossing busy roads in search of water. She has watched the arguments between the federal and state managers, and the animal rights groups, wage for years and believes the solution lies somewhere in the middle. “That would be my wish,” she said, “… that these groups could work together in a reality-based way.”