Home Columns In the Past Rosie the Riveter and the WASP

As we come together against COVID- 19 (at the recommended 6-foot social distance … ), recall a time when our nation united against the menace of world war.

In the 1940s, women worked, but usually in fields such as child care, housekeeping, sewing, or nursing. The nation had resisted being drawn into the war in Europe, not yet having recovered from the loss of almost 117,000 of our men killed in action in WWI and the return of 320,000 wounded, many horribly disfigured.

The Japanese Navy’s attack on Pearl Harbor changed all that in a hurry. Women were quickly seen as a resource to replace the men leaving crucial jobs to fight overseas.

As recruitment efforts increased, the name “Rosie the Riveter” became synonymous with women working in the war effort. These women worked in aircraft production, shipbuilding, and weapons and ammunition manufacturing.

Placer County’s own “Rosie,” Betty Mosher, was a student at Grant Union High School, on the edge of McClellan Field, an Army Air Corps base in the Sacramento Valley. As her senior year began, the high school and McClellan personnel created a program offering training for female students on aircraft engine repair.

The training came with the added perk of early graduation for those who succeeded. Mosher jumped at the opportunity. In an interview for NPS/UC Berkeley in 2014, Betty said:

“Well, I’ve always been mechanically inclined — my brothers were both mechanics, my father was a mechanic, and it just kind of came to me more naturally than it did a lot of the girls. But I don’t know, I just found it challenging and interesting. Yeah, it was kind of exciting. I thought I was real cool.”

Mosher worked on aircraft engines from small company Pratt & Whitney to create the massive 2200-hp engines for the B-29 Superfortress, the aircraft that dropped the atomic bombs on Japan to end the war.

During WWII, over 6 million women entered the workforce to build the might to win wars on both sides of the world. When the war ended, the men that survived came home and many women were laid off on the theory that they were taking jobs the men would need.

Mosher got a new job with the phone company. Though she eventually went back to McClellan, most women were expected to forget their skills and their accomplishments and go back to homemaking.

The profile of the many “Rosies” is varied. Some women weren’t satisfied building airplanes, but wanted to fly the sleek fighters and bombers themselves. Two women pushed hard to make the case for allowing women to be flyers. 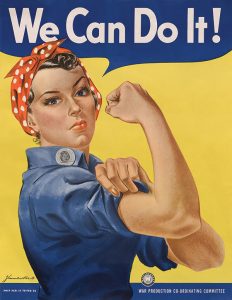 Jacqueline “Jackie” Cochran had been a record-setting racing pilot for years. She wrote a letter to First Lady Eleanor Roosevelt describing the advantages of female flyers transporting aircraft, enabling men to focus on training and flying in combat. Roosevelt suggested the idea to Gen. Hap Arnold who assigned Cochran to ferry a bomber to England as a test and demonstration.

She came to him with a list of 83 experienced female pilots. Olds forwarded the idea to Arnold, who ordered the creation of a women’s branch of the Air Transport Command.

Upon Cochran’s return from Europe, the two commands were combined to form the WASP (Women Airforce Service Pilots). Over 25,000 women applied for the program; 1,830 experienced pilots were accepted, 1,074 of which completed the intense training and got their wings.

Of these women pilots, in 1942 Roosevelt said: “This is not a time when women should be patient. We are in a war and we need to fight it with all our ability and every weapon possible. Women pilots, in this particular case, are a weapon waiting to be used.”

The 44 classes of WASP flew all varieties of military aircraft, from Piper Cubs to the P-47 Thunderbolt and P-51 Mustang fighters.

They flew the biggest aircraft of the war too, from the A-20 Havoc to the B-29s that ended the war. The B-29 was a dangerous aircraft and male pilots had begun to refuse to fly it. Col. Paul Tibbets, who went on to drop the atom bomb on Japan, assigned two women to fly demonstration flights. After watching the two WASP members fly the B-29 for several days, the men stopped complaining about it.

Unfortunately, the women were fighting the uphill battle for acceptance of their times. Much animosity was directed against the WASP and they were not considered military personnel or eligible for family death benefits until 1977. Although the women never flew combat missions, 38 were killed during their service. When they were killed, their fellow WASP would take up a collection, passing the hat to send their remains home.

Even so, the accident rate for women pilots was less than that for the men throughout the war.

The program was suddenly and completely halted in 1944 just before the war’s end, and it took until 2009 for WASP to be honored with the Congressional Gold Medal for their service to the country.

One WASP who was not in attendance was Gertrude “Tommy” Tompkins-Silver, who disappeared while flying a P-51 Mustang from Mines Field (now LAX) to New Jersey in 1943. Tompkins is the only WASP casualty never recovered.

Though it seems our next election will once again be between two old white men, we have only to look back in our history to see that women can — and did — do anything as well as the men in the effort to save the world.

Rosie the Riveter and the WASP
Sports & Outdoors

Rosie the Riveter and the WASP
Sports & Outdoors

Rosie the Riveter and the WASP
Food & Drink

Rosie the Riveter and the WASP