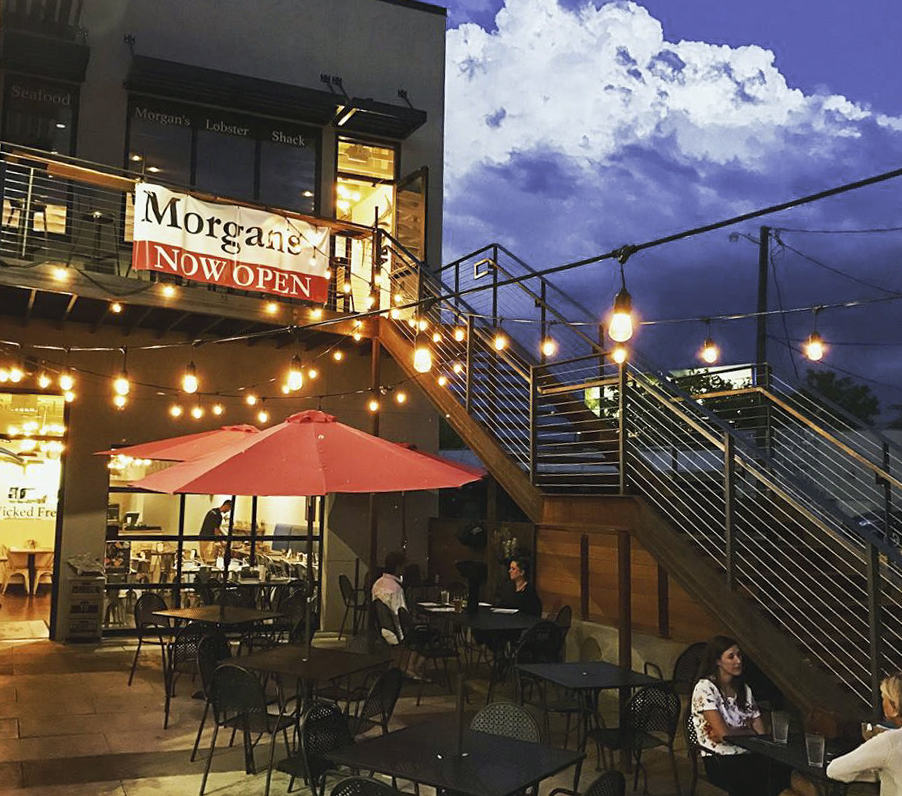 Four years ago if you had asked Shawn Whitey, owner and founder of Truckee’s Morgan’s Lobster Shack, whether he wanted to open a second location in Reno he would have said absolutely not. However, since opening in 2013, the profits from his Truckee business consistently grew from 1 to 4 percent every month and this success drove him to consider expanding into a larger market.

Although the two communities are located within 50 miles of one another, Reno and Truckee/Tahoe are completely different beasts with distinct markets, yet the number of businesses who got their start locally and then decided to expand to Reno is quite impressive. From our count, the roster includes Morgan’s Lobster Shack, The Mill Juice Shop, Coffeebar, Squeeze In, Cooking Gallery, Burger Me, Fine ’N Funky, La Galleria, Dressed Boutique, Office BOSS, and Full Belly Deli.

According to business owners, operating multiple locations of the same business is a balancing act, and everyone we spoke with waited at least a few years before expanding to Reno. “Coffeebar owns me,” Greg Buchheister, owner and founder of Coffeebar said. “Having another store is like having two more kids.”

Moonshine Ink spoke with some of these business owners about what makes their locations different when it comes to customer behavior, strategic hiring, state regulations, and general business differences. It may be the same business, but it’s not the same playing field.

“Urban people behave differently than rural people, and that has been an adjustment,” said Jeff Ridgel, owner of The Office BOSS, an office supply and shipping services store with four locations, two in Reno and two in Truckee.

Ridgel, who quit his day job in 2006 to buy Bradbury’s Office Supply and turn it into The Office BOSS, also noticed the flow models are different. “In Reno people will drive 20 minutes to get to a location, while in Truckee people are upset when they have to drive across town.”

This willingness to drive longer distances for a specific product forced Ridgel and wife Carrie to focus primarily on shipping services in Reno, which opened in 2015, rather than art and office supplies.

He explained that there are an abundance of specialty stores in Reno and people are willing to drive further to have a wider range of products to choose from. In Truckee/Tahoe, people are less willing to drive to Reno for a store that carries 10 different styles of highlighters, for example. Instead Truckee/Tahoeites choose to travel a shorter distance for less options.

Whitey said the difference is also in demographics. “In Truckee, the majority of our customers are middle/upper class, but in Reno we get every walk of life.”

Then, of course, there is the element of tourism. Truckee/Tahoe is a resort community, so crowds ebb and flow with the seasons, while in Reno customers are more consistent.

The impetus for the first Coffeebar location was the huge snow year of 2010/11 and all of the resultant ski tourists, but Buchheister, who had previously operated 15 coffee shops in Colorado, didn’t want to rely on Mother Nature for the success of his business, hence his desire to open a second location in Reno. “If ski leases aren’t signed, it effects us,” he said.

Tom Marrin, owner of Full Belly Deli, also sees a different clientele in Reno than in Truckee, but feels people’s priorities in Reno are shifting. “We are trying to bring the Truckee mentality of using better ingredients to Reno,” he said. “We are bringing produce from the Food Hub down [to Reno].”

Marrin also prices his sandwiches about a dollar less in Reno because fixed expenses are more affordable in Reno. Full Belly Deli opened in Truckee in 2007 and in Reno in 2015.

A dwindling employee pool in Truckee/Tahoe presents a serious challenge to local businesses, while Reno shows an opposite trend. “In Truckee we turn over our staff four times a year,” Buchheister said. “Reno has had almost the same staff since we opened in 2014.”

In order to incentivize his Truckee employees to stick around for longer than a season, Coffeebar offers insurance, a 401(k), and a season pass to Squaw Valley Alpine Meadows for employees working 30 hours or more.

The other business owners agreed, citing the #TahoeHousingCrisis and the subsequent high cost of living as the main reason why staffing in Reno is so much easier than in Truckee/Tahoe.

“Regulations in Truckee versus in Reno are night and day,” Whitey of Morgan’s said.

Liquor licensing, for example, is very different in Nevada than in California. The Reno Morgan’s has two full bars that serve hard alcohol. He explained that in Nevada, anyone who doesn’t have a felony can purchase a liquor license. In Truckee, however, where he only offers beer and wine, it is much more difficult to obtain a license because there are only so many available for the town.

As far as menus, pricing, purchasing, and square footage goes, each business chooses to operate differently.

Morgan’s Truckee location is 900 square feet compared to the Reno extension, which clocks in at 3,200 square feet. This translates to 100 seats in Reno versus 15 seats in Truckee. The restaurants’ capacities are not the only things that are different. The Morgan’s Reno location offers a happy hour called “Happy Days” from 12 to 6 p.m. It also offers a brunch that includes frittata, deviled eggs, and a 22-ounce bloody Mary. Truckee Morgan’s doesn’t offer any of that.

Dressed Boutique is the opposite. Its Truckee store, which opened in 2010, is much larger than its Reno counterpart and requires as many as five people to staff on busy weekends. The Reno shop, opened in 2015, is small enough to be run by one employee. Dressed also deals with different fashion trends in each shop.

“I actually have three Dressed locations — in Truckee, Reno, and Harbor Springs, Michigan,” said Kait Mally, owner of Dressed Boutique. “It is not easy at times because the styles are so different.”

Pricing also proves to be difficult. Whitey explained that people in Truckee are more willing to pay a higher premium for his high quality products, but in Reno his customers are less particular about ingredients.

The Squeeze In — famous for its omelets, for its Egghead Club loyalty program, and for being featured on Throwdown! with Bobby Flay — was first opened in 1974. The original partners eventually parted ways, and in 2004 the restaurant was sold to the Morris family.

“My dad was a landscaper in Truckee and his dream was to one-day own Squeeze In,” Shila Morris said. His dream came true in 2004. In 2008, the family opened their first Reno location.

In 2013 the family knew they wanted to continue growing Squeeze In, but shied away from franchising. Morris said they associated the business decision as “selling out,” mentioning names like Subway and McDonald’s.

But in asking themselves “How can we grow?” it became obvious that franchising, or “famchising” as they like to call it, was the best option. As of September, there are 10 franchise locations in the works with three being fully operational — this in addition to the five locations owned by Morris family members. They hope to have 50 locations by 2020.

While each business mentioned had different motives for expanding, at the root of each story lies one commonality — they were successful enough in the Truckee/Tahoe market to expand into a larger and subsequently more completive market.

“Reno and Truckee are like yin and yang,” Buchheister said. “Truckee is amazing because it is so close to amazing places and people. Reno has a steady, consistent, and reliable business … But when Truckee is busy, it is way busier.”