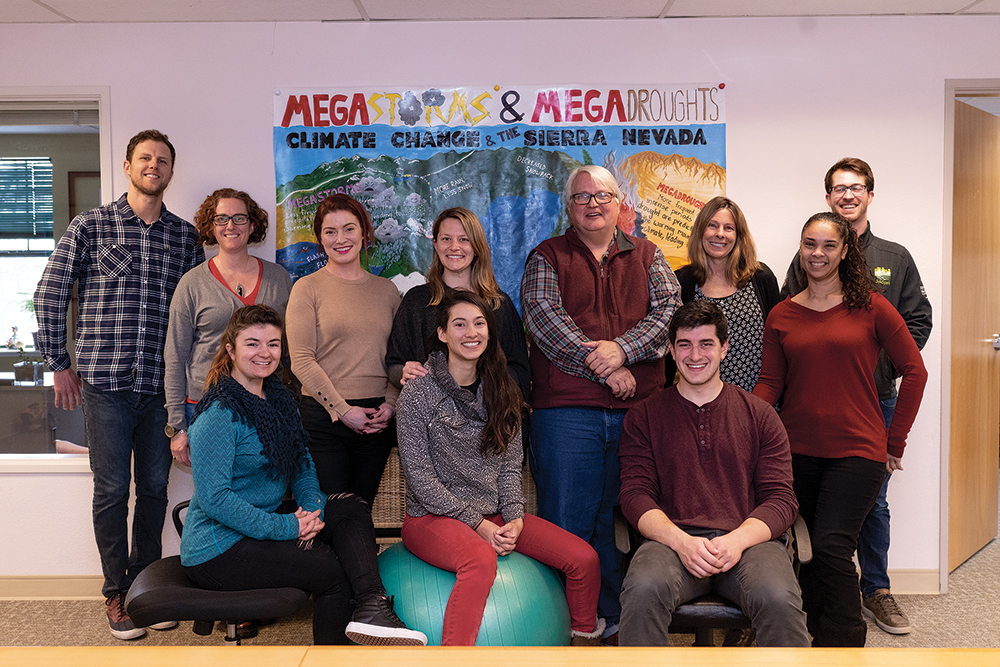 In the last two decades, roughly $250 million in conservation funding has poured into the Sierra Nevada, and locally based Sierra Business Council can claim a large part of the credit. Since 1994, the nonprofit has been on the forefront of fighting climate change in the region by securing conservation of land and driving direct investments for energy efficiency, both in small businesses and government policy. Its three different teams — business innovation, government advocacy, and climate mitigation — continually create lasting progress for our community.

“We need both government policy and [the] private sector to direct change for combatting climate change,” said Steve Frisch, president of the SBC. “That’s core to our philosophy: business needs to drive change in our community. Most of the money in our community is controlled by private sectors, so how do we help them combat this successfully?”

One of the key projects SBC’s climate mitigation team works on is compiling greenhouse gas emission inventories, energy action plans, and climate action plans from local governments. When they do an inventory, they’re essentially cataloging local government and community-wide greenhouse gas emissions, then creating a strategy for reducing those emissions to meet state targets in the future. SBC has completed emissions inventories and energy action plans for Town of Truckee, Truckee Donner Public Utility District, Nevada County, and almost every jurisdiction in the Sierra Nevada.

“We have a whole wing that focuses on climate mitigation and climate adaptation, which includes partnerships with local governments that follows climate action policy and disseminating that information to their communities,” said Frisch. Essentially, the nonprofit studies the effects climate change will have on the Sierra Nevada region and puts specific plans in place for local governments to help fight it. For example, if we’re going to see increase in wildfire or decrease in snowpack in the coming decades, how do we adapt our businesses, local government, and individual behaviors to that reality?

One tool in the SBC’s belt to achieve this is by driving the political discourse. The advocacy team routinely travels to Sacramento and Washington, D.C., to actively develop policy that confronts climate change, such as AB 23, California’s climate change legislation that set specific, statewide greenhouse gas emission reduction goals by 30 percent from the year 1990’s emission levels by 2030, and 80 percent by 2050.

Last year the team worked on California Propositions 1 through 3, and Proposition 68. Proposition 3 was an $8 billion statewide water bond, which failed as a ballot measure in the last general election by a half percentage point, and Proposition 68 was passed during the primaries in June, which brought a $4 billion bond to protect water, parks, and the environment throughout California. “Every year we work on 20 to 30 pieces of legislation and/or ballot measures that increase funding, access, or opportunity for resources in the Sierras,” said Frisch.

SBC realizes that the organization can’t do the work it does without driving money to the problem. According to economic research done by the Federal Reserve Bank of St. Louis, about 20 percent of the U.S. national gross domestic product is federal government spending, meaning the remaining 80 percent of spending is made by private companies and the general public. As a result, SBC has tried to forge multiple public/private partnerships to address the various challenges presented by the changing climate in the Sierra Nevada region.

SBC is a nonprofit that uses a triple bottom line business model, which means they give equal importance to creating social, environmental, and financial progress within their company. The business innovation team works alongside small businesses that are interested in becoming more energy efficient but perhaps don’t know where to start. For example, 15,000 small businesses have been retrofitted for energy efficiency and invested in to become increasingly renewable as a result of SBC’s business innovation.

“We were the first small business development center in the country that was established as a triple bottom line framework,” said Frisch. “Through that program, we consult with hundreds of businesses every year to discuss how they can adapt their business to a changing climate and change business practices to better address climate change.”

The Truckee/Tahoe community can get involved with the work SBC does by forging business partnerships to retrofit physical spaces, offering general support for and dialogue of its mission to mitigate climate change, and to participate in the town’s general plan update. Frisch noted that general plans have a tendency to be vague, and the public can play an important role by asking the council to create very simple and implemental plans.

Frisch concluded, “When it comes down to it, climate change is accelerating, and we really only have a decade to act.”