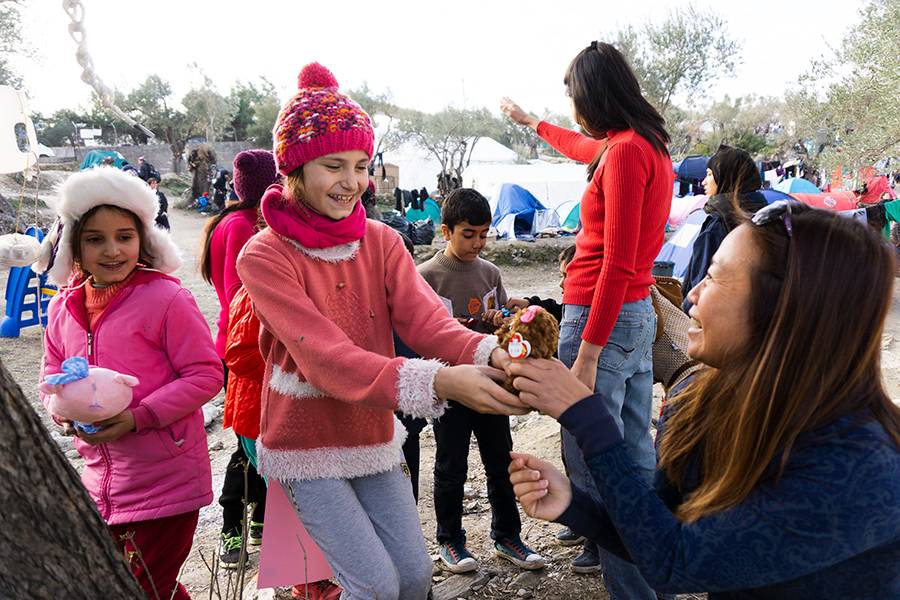 When Maria Tran saw the infamous photo of three-year-old Alan Kurdi, a young Syrian boy fleeing his country’s violence, his lifeless body strewn on the Mediterranean shore, she was stricken by the image, as most were. But, for Tran, it was a more personal connection to the refugee crisis than most.

“I was also three years old when my parents made the difficult decision to leave everything that we knew and everything that they owned to escape persecution; we were ethnically Chinese and trying to escape from Vietnam,” Tran said. “When I saw that photo, it struck a deep chord with me. That could’ve been me if we weren’t rescued and if we didn’t have the right programs to take in refugees in the states. [It] haunted me.”

Tran catalyzed her reaction to the photo into action, and within weeks she was in Greece, witnessing first-hand the plight of refugees in the area. She posted about what she was seeing on Facebook and asked for donations, and overnight she raised $3,000 to help establish a base camp on the shore, receive incoming refugees, and provide hot tea, milk for babies, and supplies. From that action, Sea of Solidarity was born.

Sea of Solidarity is a nonprofit aimed at addressing the needs of refugees at landing sites and camps primarily in Greece and Turkey, the areas hardest hit by the Middle East refugee crisis. During Tran’s first trip, she saw that small grassroots organizations were the key to providing immediate assistance to refugees. Her organization is nimble, with little overhead and no bureaucracy, so it can adapt quickly to the needs on the ground on any given day. And even more incredibly, all of it is accomplished from Tran’s home in Truckee.

With the advent of social media, the access and ease of global communication and online payment methods are what enable Tran to fund her volunteers on the ground. Living in a mountain town, she can still connect with community leaders in Greece and Turkey, assess their needs, and then wire funds directly to local vendors, where her coordinators can then purchase food, diapers, tents, or gas for transportation from accounts she has set up.

“I think the way crises are funded can change,” Tran said. “Prior to doing this, I had no idea of the possibilities.” She says someone can message her and say they just received three boatloads of people, all with babies, and they need baby supplies. She can contact her vendor in the area, wire money, and have the supplies in the volunteers’ hands in 15 minutes.

“That’s the kind of response we’re talking about,” Tran said. “There’s no way you could do that even 10 years ago.”

While living in Truckee doesn’t affect her ability to coordinate refugee aid, the downside to being based in a less populated area is there are fewer opportunities to fundraise and get exposure for her project. But, Tran says that Truckee is truly “a mountain outpost of the San Francisco Bay Area,” meaning not only is it a short drive to the Bay for meetings or presentations, but she also feels she is not viewed as an “outsider” there, since Truckee is very much connected to the Bay Area. It’s also not quite true that Truckee is completely void of exposure opportunities. Tran recently worked with Sugar Bowl Academy to connect the academy with one of the distribution centers she works with in Greece for a service trip for students. The community presentation she made used stories and photos of refugee children for local awareness, Tran said.

There are other benefits that a small town provides that Tran says would have been scarce to come by in the Bay. Tran and her family moved to Truckee full-time two and a half years ago, and the culture of Truckee is more supportive of an endeavor like this, she says, whereas her peers in tech wouldn’t have understood her need to pursue this goal. And, the Truckee lifestyle provides her with much more sanity than her old life in Silicon Valley, and because of that she has more of herself to give through Sea of Solidarity. While empathy fatigue has affected her organization — it is harder to raise money when her cause no longer splashed across is the news on a daily basis — she has found that, in true grassroots fashion, she makes progress through word-of-mouth.

Providing Global Aid from a Mountain Town
12:00 am