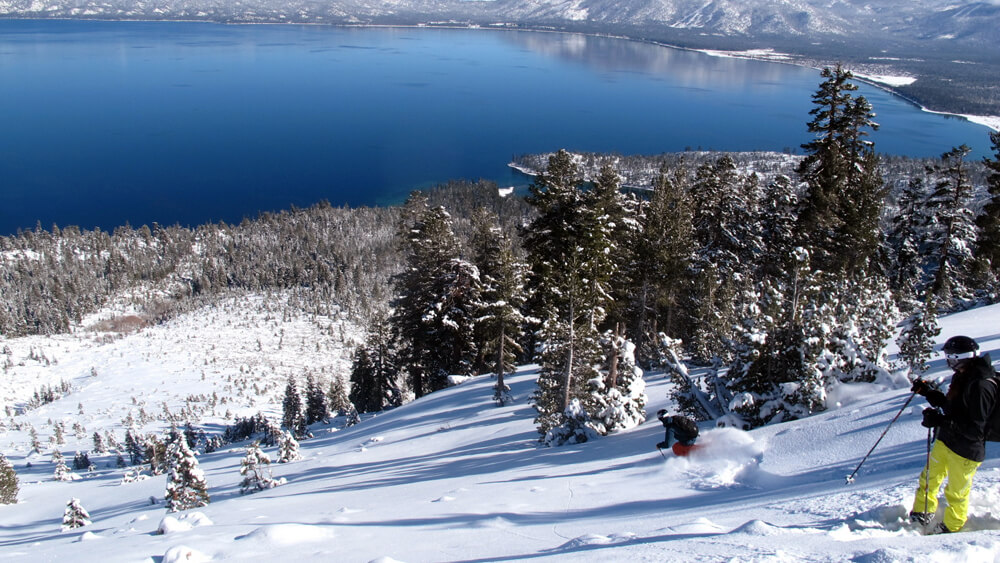 Thirteen paved turnouts are part of the project, which goes from Meeks Bay to just north of Vikingsholm near Emerald Bay, a 7-mile stretch on Highway 89, according to Caltrans. The project was completed in September. Most turnouts have been reduced to about 15 feet in width, making parking along the road highly dangerous or impossible.

“Caltrans is complying with the Tahoe Regional Planning Agency’s mandate to reduce or eliminate unpaved areas along the highway that are a source of sediment entering the lake,” said Steve Nelson, a Caltrans public information officer. “We paved the shoulders and turnouts to do this, and also reduced the width of some turnouts and restored the backside to a natural state behind rock barriers to deter unauthorized parking.”

The backcountry community, upon hearing the news and seeing the construction firsthand, signaled a rallying cry to let the myriad agencies involved, including Caltrans, TRPA, El Dorado County, California State Parks, and more, know that they felt the community was being ignored.

“Backcountry skiers have not been taken into consideration as much as they should be,” said local backcountry enthusiast Brennan Lagasse, also a former TRPA employee, who published a call for action letter on Sept. 28 on his website stateofthebackcountry.com. “The agencies are out of touch with what’s going on. These parking spots have been used for decades.”

The sentiments, echoed through Facebook threads, online articles, and various forums, opined that users are not against improving water quality and reducing runoff, and they understand there are no evil forces at play, but feel there is a serious lack of communication between the people in control and the large backcountry community.

“There are some great people that are trying to preserve the lake, and the many agencies involved generally have good intentions, but the result is a slow loss of parking and a massive increase of skiers, which is a big deal,” said Rich Meyer, a ski guide and co-founder of the group Tahoe Backcountry Alliance.

Meyer feels the loss of the actual parking spaces is “just the tip of the iceberg,” with ripple effects throughout the Tahoe region. He believes the limited access will reduce visitation to nearby businesses as well as increase congestion in other areas as skiers will be forced to go to other backcountry zones.
Adding to the complexity, many of the pullouts have never been officially designated as parking spots because they are intended as temporary pullouts. The legality of some of them has even been in question throughout the years for day parking, making for a difficult battle for frequent users.

“We’re finding it hard to fight for something that’s not technically there,” Meyer said.

Backcountry skiers believe the recent loss of parking is another unfortunate step in the long-term trend of skiers losing access to some of the best skiing in the region. Access to Pyramid Peak, Mt. Tallac, Rubicon Peak, and others has been threatened, reduced, or eliminated over the years.

Skiers like Lagasse want to be a larger part of the discussion with the agencies prior to the improvements actually taking place. In addition, he feels that the best management practices that spur the water quality improvement projects can be implemented while also providing access for skiers. He hopes Caltrans will modify some of the recent changes to allow winter parking. He feels everyone can win.

“The fact that TRPA did not contact any member of the backcountry community to weigh in on this crucial issue speaks to how they view our voice at the table,” Lagasse wrote in his online piece.

Nelson said that all Caltrans projects go through a public comment period during the environmental review process, which for this project was completed in June 2009, but acknowledges the difficulties to stay abreast of their process.

“I realize not everyone is in tune with the phases Caltrans’ projects go through prior to actual construction, and better outreach should have occurred to include input from the backcountry skiing community,” Nelson said.

There were a flurry of emails, letters, phone calls, and posts made by the ski community and beyond to express dissatisfaction with the changes. As a result, some last minute changes were made by Caltrans. Mainly, a popular pullout that skiers use to access Jakes Peak, near D.L. Bliss State Park, has been widened from 15 to 25 feet. At this width, Caltrans said it anticipates wintertime parking to occur.

Backcountry users have expressed satisfaction to some extent with the modifications, but are hoping for more future changes to increase access. However, with a moratorium on construction starting Oct. 15, time could be running out for further changes before the winter.

There are also reported plans to plow the upper parking area at D.L. Bliss to provide additional wintertime parking, according to Nelson, which has previously not happened. But he added that if parking disrupts Caltrans’ plowing operations or prohibits slower vehicles from using the turnouts, the “situation may have to be readdressed.”

In addition, Caltrans is planning to work with other partner agencies to seek further solutions to wintertime access to Desolation Wilderness, according to Nelson.

“I do think things are looking like they’re going in a good direction with the process,” Lagasse said.

Plucked Out Pullouts
Sports & Outdoors
12:00 am