Home Columns In the Past North Tahoe Firefighting in the Fifties 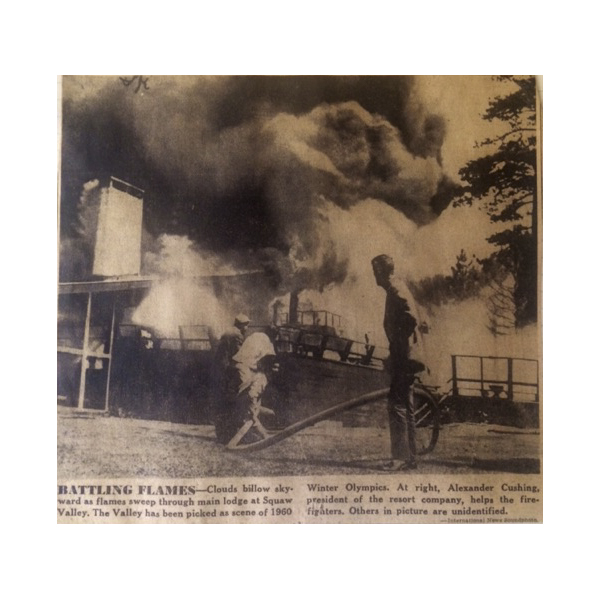 A gleaming red fire engine roars by, a paramedic ambulance close behind. Arriving at the scene, the firefighters attack the fire, assess the wrecked car, or stabilize the sick or injured person. On the North Shore, we’re fortunate to have the expertise and equipment to handle almost any emergency, but has it always been this way?

The North Tahoe community has only had a year-round population since the 1920s. At that time, there were just a few hardy families that stuck it out through the often brutal winters. After World War II, however, people built more homes, established businesses, and the towns of Kings Beach and Tahoe City expanded.

During summer, the U.S. Forest Service provided fire protection, with engines equipped with small water tanks for fighting brush fires. While adequate for the infrequent forest fire problem, these units and the rangers that staffed them were not equipped to deal with structure fires. In winter, the residents were left to handle blazes themselves. Even into the 1950s, bucket brigades were still used by neighbors to fight fires.

On a snowy winter’s day in 1950, Jude Cagle’s house caught on fire. Neighbors and friends tried to control the blaze, but it engulfed the home. Snow often closed Dollar Hill between Kings Beach and Tahoe City and the fire engine there would have taken 30 minutes or longer to get to the scene, even in good weather. The Forest Service engine stationed in Truckee had long since been put away for the season. The county plow arrived and valiantly attempted to extinguish the fire by directing the blower’s chute at the home, dumping massive amounts of snow onto the flames.

The effort proved futile, as the now gutted home collapsed and all that was left was a snow-covered pile of ashes.

The loss of the Cagle home energized local leaders who began an effort to raise money to acquire a fire engine and to train volunteers to respond. Unable to raise the entire $8,000 necessary, four of those civic-minded men personally signed notes to enable the purchase of a 1952 Dodge Power Wagon 4 X 4 with an 800-gallon-per-minute pump and a 250-gallon water tank.

The Cagle fire wasn’t to be the last trigger to get the growing community moving. On May 30,1952, a blaze started in John Pederson’s home, which destroyed it and ignited a 25-acre wildland fire that was finally controlled by a forest service engine, two bulldozers, dozens of forest service firefighters, and over a hundred citizens and visitors who pitched in.

The new Dodge fire engine arrived in July, 1952 and was greeted by 15 excited and energetic volunteers led by volunteer fire chief Max Krueger.

Fundraising continued in order to pay off the engine and to equip and train the volunteers. A shed was erected by the firefighters to protect the rig from the elements and to keep the pump and tank from freezing. The North Tahoe Fire Control Corporation came into being to enable business and residence owners to contribute to the effort. The local casinos Cal-Vada Lodge, the North Shore Club, and Cal Neva assisted the effort by hosting steak dinners and spaghetti feeds featuring star entertainers such as Nat King Cole.

The North Tahoe Engine responded to the August 1956 Squaw Valley Lodge blaze that destroyed that landmark building, consuming the entire structure in under forty minutes. Tahoe City Fire volunteers attacked the afternoon inferno, with immediate assistance from Kings Beach volunteers and the U.S. Forest Service. Owner/developer Alex Cushing is shown holding a fire hose from North Tahoe Engine 1, spraying water over the smoldering rubble of the Lodge as a woman watches lounging poolside in a Sacramento Bee photo.

Construction of the new lodge started the next day. Cushing was determined that Squaw Valley would host the 1960 winter Olympics.

The old Dodge fire engine remains in service to its current owner, Mike Griffin, a Truckee building contractor. If you attended any Fourth of July parades in Truckee before 2010, you saw it, covered with happy kids spraying water over the delighted crowd as it rolled past. It is still fully operational and has won prizes at many car shows, including our own Cannibal Cruise.

The dedicated and persistent men and women who bought and equipped said fire engine started the department that became the North Tahoe Fire Protection District. The professional, capable, and effective response that the NTFPD now provides is rooted in the commitment to service that our volunteer forebears exemplified.

So, honor their efforts by doing your part to help them help you. Change your smoke detector batteries when you change your clocks and walk outside to enjoy the spectacular Sierra. While you’re out there, try to imagine being a firefighter or a paramedic looking for your house address. Could they see it in contrast to your paint? How about at night? Do your friends and family a service and make those house numbers big and visible, especially at night — it could be a life-saving move.

North Tahoe Firefighting in the Fifties