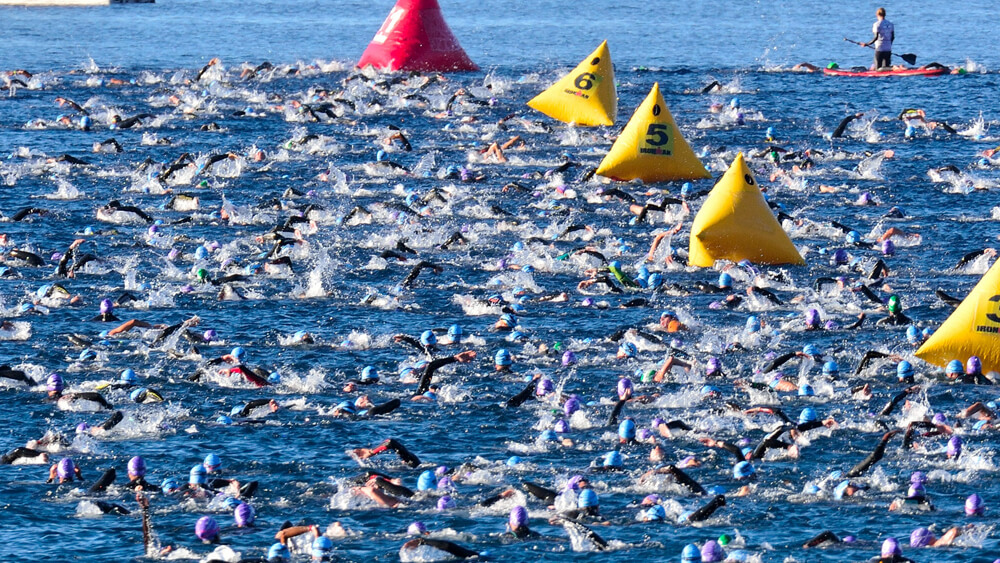 Just three days after this year’s Lake Tahoe Ironman event in September, officials with the popular triathlon announced that it was discontinuing the Lake Tahoe event. “After careful consideration, Ironman Lake Tahoe will not be extended,” according to a statement on Ironman’s website. “We appreciate the efforts and support of the city, volunteers, sponsors, and everyone else involved in putting on this triathlon. We would also like to thank all of the athletes who have raced with us here.” Officials with the event told other media outlets that the weather was the main factor in the cancelation. The race was canceled in 2014 due to smoke from the King Fire. A week before this year’s event, smoke filled the Basin, although the weather on the day of the event was sunny and smokeless. Ironman had a five-year commitment to produce the Lake Tahoe event, which was held in North Tahoe, Truckee, and Squaw Valley, and 2015 was the third year. Info: ironman.com ~ Kara Fox/Moonshine Ink

Placer County will hold a public meeting Oct. 19 to gather feedback for the Speedboat Beach Master Plan. The Placer County Board of Supervisors and the North Lake Tahoe Resort Association provided $50,000 in March to develop a master plan for Speedboat Beach, which is located at the intersection of Harbor Avenue and Lake Street in Kings Beach, near the Nevada state line. The public beach is a popular destination for residents and visitors, but there are concerns about traffic circulation and parking, along with general misuse of the beach and surrounding areas. Enforcement of rules, informational and interpretive signs, potential for a kiosk, and options for restroom facilities will be topics of discussion presented by multiple Placer County agencies. Info: Mon., Oct. 19, from 6 to 7:30 p.m. at the North Tahoe Event Center, 8318 North Lake Blvd., Kings Beach

Tourist-Based Economy to Get  Boost from Assessment District

The Truckee Town Council approved the formation of a Tourism Business Improvement District at its Sept. 22 meeting. The formation of the TBID means the transient occupancy tax (TOT) in the town will increase by 2 percent, on top of the 10 percent currently charged by lodging properties and short-term home rentals. It is estimated that the additional TOT money will raise $340,000 a year, which will go towards tourism marketing. The Truckee Donner Chamber of Commerce spearheaded the initiative and will form a TBID management committee, which will decide how to spend those funds. The TBID goes into effect Oct. 1, but the money will not be collected until early next year. Info: Lynn Saunders, chamber president, (530) 587-8808 ~ Kara Fox/Moonshine Ink

The Town of Truckee is seeking community input on a project that would make a number of improvements to Donner Pass Road between Coldstream Road and the McIver Roundabout. Partially funded by a $1.5 million grant from the Federal Highway Safety Improvement Program, construction would begin in 2016 on potential improvements ranging from sidewalks, bike lanes, and crosswalks to roundabouts and streetscape beautification. The aim is to improve safety for pedestrians, cyclists, and drivers while making the schools, businesses, and residents along the stretch more accessible for all users, with improved aesthetics. Town staff anticipates presenting alternatives to the public for the corridor in December. Town staff is still seeking public input. Info: envisiondpr.com, Scott Mathot, assistant engineer, smathot@townoftruckee.com

The Truckee Donner Public Utility District announced Sept. 28 the launch of two new Plug-In Electric Vehicle (PEV) public access charging stations in Truckee. The stations are at the Truckee Train Depot site in downtown Truckee and at the Pioneer Commerce Center. Both locations will have two charging stations. The greater Truckee area has seen a dramatic increase in PEVs over the last few years, driven by Truckee’s position as a major stop on the I-80 corridor, an iconic destination for the area’s many visitors, and as a gateway to Lake Tahoe and the Northern Sierra. In addition, the California Energy Commission recently gave a $200,000 grant to the Tahoe Regional Planning Agency to produce a Tahoe/Truckee PEV Readiness Plan. The charging stations will require payment using either a credit card or a charging app on a smartphone. However, to promote the new stations, TDPUD will offer free charging for the first month of operation. A ribbon-cutting ceremony to open both stations is expected to occur in early November. Info: tdpud.org

A first-of-its kind conservation plan is a step closer to reality after the Placer County Board of Supervisors approved funding on Sept. 15 for land purchases and a new position to oversee the plan in the county’s final 2015-2016 budget. The Placer County Conservation Plan is the nation’s first such agreement to share permitting authority among local agencies and state and federal governments, and creates a comprehensive conservation plan that sets aside up to 47,000 acres of land under permanent preservation. When approved, the plan will result in a larger, more contiguous area of open space and natural habitat, as well as a more streamlined, cost-effective, and predictable permitting process to promote sustainable future development in unincorporated areas of the county and the City of Lincoln. The plan’s draft environmental impact report is expected to be released for public review and comment in the winter of 2016.

On Oct. 1, boat inspections were moved to select launch ramps and winter hours began. Tahoe Resource Conservation District inspectors will be stationed at Cave Rock and Lake Forest boat launches from 6 a.m. to 4 p.m. seven days a week, weather permitting. All boats without an intact Tahoe inspection seal are required to get an inspection during daylight hours. Decontaminations are available by appointment only for watercraft that are not clean, drained, and dry. Info: (888) 824-6267, tahoeboatinspections.com

On Sept. 18, the California State Insurance Commissioner awarded the Nevada County District Attorney’s Office a $31,000 grant to help investigate and prosecute auto theft and auto insurance fraud. The district attorney’s office will be able to assign a dedicated investigator and a part-time deputy district attorney for enhanced investigation and prosecution of auto theft and fraud cases. The district attorney will work closely with the California Department of Insurance to identify cases that will have the most deterrent effect and those that significantly impact the community. In the last three years, there were 45 suspected fraud cases reported to the Insurance Commission that were not investigated due to a lack of resources. The grant will allow these referrals to be investigated locally and help protect Nevada County consumers.

From the well-known Upper Gypsy Trail at the Northstar Bike Park, a connector has been built to the newest trail, Lower Gypsy. Featuring a Red Bull wooden feature into a dirt berm, Lower Gypsy opened Sept. 25. The trail links into a Red Bull Roller Coaster feature, which riders of any skill level can hit. A video featuring pro biker Aaron Chase riding the feature can be seen at win.gs/northstar.

A newly released road and mountain bike guide is available to assist cyclists for the Lake Tahoe region. The online guide Bike Tahoe: Tahoe’s Ultimate Bicycling Guide features 65 of the most popular bicycle rides in and around the Lake Tahoe Basin. Bicyclists can locate their position during their ride using a GPS-enabled device and the location feature on the map. The guide helps a bicyclist select a ride by region with five sub-regions in the guide: South Tahoe, North Tahoe, Truckee, Carson Valley, and the California Alps. Each sub-region has a ride directory with specific details, descriptions, and Google Maps. Bicyclists can select rides using a similar system to that of ski areas: using green circles, blue squares, and black diamonds to describe  beginner, intermediate, and advanced rides, respectively. The guide was made by local bicycle advocate Ty Polastri, president of Team Tahoe. Polastri rode every ride, mapped them, took the photographs, and wrote descriptions. Info: biketahoe.org

Tahoe SAFE Alliance turns 30 this year and held a celebration lunch with 100 community partners and agencies, volunteers, and donors at the North Tahoe Event Center in Kings Beach on Sept. 10.  The non-profit agency that provides services to survivors of domestic/intimate partner violence, sexual violence, and child abuse in North Lake Tahoe and Truckee celebrated the nearly 20,000 community members that have received services since 1985. Tahoe SAFE Alliance’s vision for the next 30 years included an additional shelter for survivors of domestic violence, an attorney on staff to assist community members, a bi-lingual marriage and family therapist to provide adult therapy, as well as other goals. Info: tahoesafealliance.org

The Sierra Business Council received a 2015 Nature Grant for $7,500 from the Tahoe Truckee Community Foundation to support the planning process for educational Lake Tahoe Water Trail wayfinding trailhead signage. The grant provides funds to allow the Sierra Business Council to work with lake-wide public access land managers and recreation providers to discuss the process for development and installation of coordinated educational signage at primary public launch locations, beginning in the 2016 summer season. The Lake Tahoe Water Trail signage will provide water safety and resource conservation tips, and navigable paddle routes and distances to locate public beach access to shoreline businesses, nearby hiking trails, historic sites, lodging, and campgrounds. The Sierra Business Council was awarded a $50,000 grant from the California Tahoe Conservancy in February 2015 to manage the Lake Tahoe Water Trail.