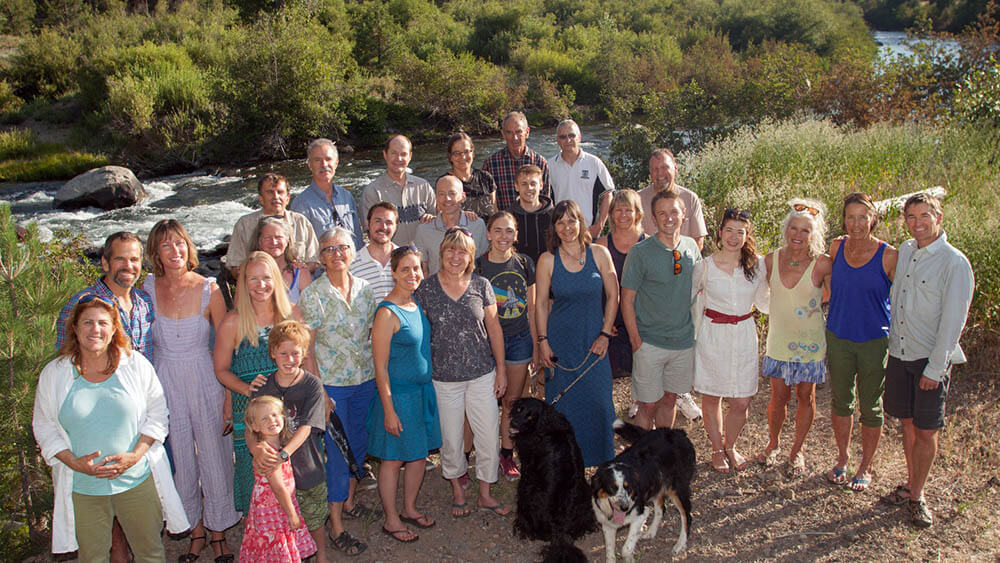 On July 15, a group of Truckee residents celebrated the purchase of 7.9 acres of industrial redevelopment property on West River Street and the future site of their cohousing neighborhood, a community designed and financed by local residents. The Truckee Cohousing group, comprising approximately 20 member families, has been meeting regularly since mid-2017 and recently formed as Truckee River Commons, LLC. Prior to closing on the property, the cohousing group was engaged in impromptu work parties to clean up the site. The group has hauled off three large dumpsters and about 100 yards of junk and trash. Info: truckeecohousing.com

On July 24, Placer County Board of Supervisors held a public meeting on the formation of a transportation Tourism Based Improvement District (TBID) for Olympic Valley and Alpine Meadows. The district would be a micro mass transit district, an evolution of the traditional TBID, but specifically based to provide transportation services. The proposed district will consist of a 1 percent lodging tax increase, as well as 1 percent of Squaw Valley Ski Holdings’ lift ticket revenues. It would have a five year life, and would implement a fixed-route micro mass transit shuttle service that would deviate from the route at the request of the rider.

The Tahoe Fund has three new projects. The fund is currently seeking donations to the Desolation project that will help fund the Tahoe Rim Trail Association to rehabilitate a section of the trail, improve safety for trail users, and reduce the flow of sediment into alpine lakes and streams. Every dollar given to the project will be matched up to $40,000 through the end of 2018. The Tahoe Fund has a goal of raising $15,000 to benefit the Kings Beach Trail, which aims to transform a current off-highway vehicle trail with major erosion issues into a multi-feature trail for use by mountain bikes, motorbikes, hikers, and equestrians. The third project has a goal of raising $15,000 for the Sugar Pine Foundation in an effort to plant 100,000 seedlings around the Basin. Volunteer plantings are scheduled at the Emerald Fire and Angora Fire scars as well as at Spooner Summit, Sand Harbor, and Tahoe Vista, and along the new bike path from Incline Village to Sand Harbor. The Tahoe Fund also launched its new Take Care Tahoe website on July 2. Info: tahoefund.org, takecaretahoe.org

On Sept. 8, Truckee community members are invited to a town picnic at the Donner Lake West End Beach to honor the 25th anniversary of the Town of Truckee’s incorporation and 155 years since its establishment. All residents are welcome to celebrate the Truckee Way with music by The Berm Brothers and Richard Blair. The town urges residents to ride their bikes and use the free bike valet, or use free bus transportation from Truckee neighborhoods to West End Beach, where a new community photo will be taken. Info: 25thanniversarytruckee.eventbrite.com

The Placer County Board of Supervisors voted on July 24 to initiate the $3.6 million purchase of an 11.4-acre parcel in the Dollar Hill area of Tahoe City, referred to as the Nahas property, to pursue a housing project. The unanimous vote of approval sets in motion a project that could deliver much needed affordable housing to a community that is in the grips of a severe housing crisis.  On Aug. 1, Placer County and the Mountain Housing Council’s community meeting in Tahoe City gathered input on all elements of the project, and will include that feedback in its request for proposals from developers. Info: mountainhousingcouncil.org

The Washoe County Health District confirms that mosquito samples from the Damonte Ranch and Hidden Valley areas have tested positive for West Nile Virus — the first positive tests in Washoe County in 2018. When the virus identification is confirmed, the health district increases mosquito surveillance and conducts controlled early-morning insecticide fogging in the area. Take steps to avoid exposure to mosquitoes this summer: Wear proper clothing, use repellent, and minimize standing water near your home.

Several wildfires in Nevada and California have caused air quality to deteriorate. Health officials in Washoe County Health District’s Air Quality Management have reported that the county experienced the highest level of ozone air pollution since 2008. Recently, an Air Quality Index for ozone was 140, which is unhealthy for sensitive groups. The highest ever for ozone in Washoe County was an Air Quality Index of 164 in 1984. Ozone and fine particulates in the air can harm health. Info: ourcleanair.com

Great Basin bristlecone pine is the longest-lived, non-clonal species in the world, capable of living for more than 5,000 years. A new study found that these trees not only repel mountain pine beetles, but also don’t support the survival of the beetle’s offspring. “This has implications for how we can help protect other trees,” said Barbara Bentz, co-author of the study and a research entomologist with the USDA Forest Service Rocky Mountain Research Station. “These unique defenses could be used to develop strategies to protect other high value trees from mountain pine beetle attacks.”