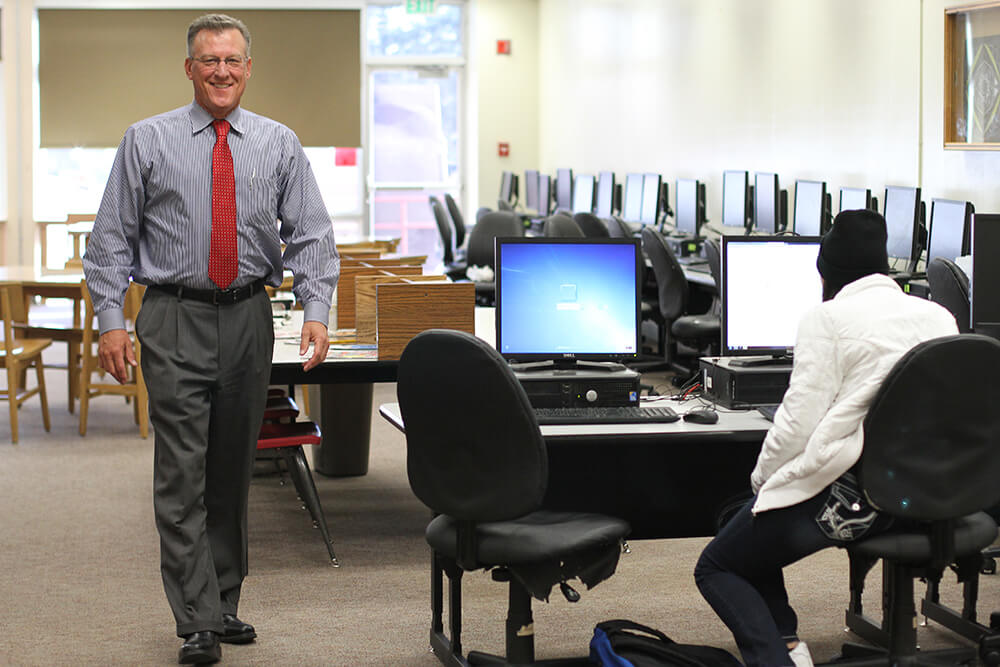 His firm voice rings through the halls as he admonishes the stragglers to hurry their way to the classroom — just one of the many daily duties of a job that requires numerous talents and skill sets. As Truckee High’s principal, Carlson is part disciplinarian, part leader, and part educator, a mix of roles he seems very comfortable filling.

Carlson started as Truckee High School principal in July. He is the fourth principal to lead the school in the last five years. And top on his list of things to accomplish at the high school is to bring a level of stability to the school’s leadership.

“Anytime you change leadership three or four times there is going to be an element of inconsistency,” said Carlson. “And it does take time. There is no substitute for that relationship that is built with the community over a three- to four-year time period.”

Stability in the leadership at Truckee High would be a welcome change after five years of a revolving door at the principal position. Greg Dettinger lasted only one year as principal before resigning. And the two principals that preceded him, David Putney and John Neary, lasted only two years each.

If Carlson’s track record is any indication, he will reverse this trend. He was the principal at McQueen High School in Reno for 12 years, a school of 2,000 students.

“One of our goals is to have a longer-term principal at Truckee High. That was a part of Mr. Carlson’s record, and that was a positive,” said Leri.

Carlson’s history of staying with a school for the long haul mirrors Leri’s own background. And the hope, even beyond Truckee High School, is that the school district is building a team of strong leaders who will be a part of the educational success of the community for years to come.

“My track record is that in 26 years, I was in two school districts,” said Leri. “I don’t like to move around. I like to stay somewhere and see change and efforts sustained over time.”

It is a process he succeeded with at McQueen High School, which he led to be ranked as the 702nd best school in the nation, according to a 2010 list by Newsweek that included 1,600 public schools, representing the top 6 percent of public schools in the nation.

But while Carlson will bring that academic focus to Truckee High, he will also address some hot-button social issues that extend outside of the classroom.

In June, Truckee Police Chief Adam McGill declared in a letter to the community that Truckee “has a youth alcohol problem.”

“The Truckee Police Department remains highly concerned that more preventable tragedies will occur if the Truckee community does not change this culture,” wrote McGill.
But both Carlson and Leri said that the alcohol issue is one that must be addressed both in school and in the broader community.

“I think it is a community-wide issue,” said Leri. “Certainly with the high school we have programs to address drinking and drug use. The most important thing seems to be the peers and the partners — having a culture where under-aged drinking is not acceptable.”

The other issue of even deeper community concern has been an alarming number of youth suicides. One Truckee High graduate and three Truckee High students have committed suicide over the last four years.

Truckee High has responded with a student-led SOS (Sources of Strength) program that “helps kids understand all the pieces that go into creating a happy and productive life,” said Carlson. A wellness center at Truckee High addresses a wider range of social issues. The school district has also launched TeenScreen, a survey of 10th graders that identifies risk factors like depression, anxiety, and alcohol and substance abuse, and helps students connect with resources to address mental health issues.

Pathways Just like the school district is partnering with outside resourses like the Community Collaborative of Tahoe Truckee on substance use and mental health issues, Truckee High will also look beyond the classroom to give students the career and college preparedness they need.

Truckee High has already developed two “pathways” in engineering and health services. The school hopes to grow those into four-year programs and partner with Sierra College and Tahoe Forest Hospital to give students career training that is “as current and relevant as possible,” said Carlson.

These pathways, and the emphasis on Common Core Standards, represent an emphasis on skills and critical thinking, rather than simply content.

“We need to have students who can think and can problem solve,” said Leri. “They know content, but they also know how to access content appropriately.”

This evolving philosophy on education takes into account the overwhelming influence of technology and ever-present availability of information that makes decision making, collaboration, and critical thinking a priority.

“We want to help create a generation of innovators, in school and out in the world,” said Leri.

The school district has addressed this by bringing Naviance, an online college preparation program, to district students, launching a STEAM Fair (Science, Technology, English, Arts, and Mathematics) at the school, and emphasizing technology skills throughout the four years of high school.

But the balance of school offerings is also important to Carlson, a former science teacher and athletic director. He said the emphasis on career and college preparation will be complemented by encouraging creativity and investing in top-ranked drama and arts programs.

Carlson’s arrival at the district comes as the future of the district looks increasingly bright — school district budgets are being buoyed by increasing property tax revenue as the housing market rebounds. And Truckee High brought in Logan Mallonee, previously the district’s academic coach, as its assistant principal. The team of Carlson and Mallonee gives the school “a good blend of a new perspective and someone with some experience in the district,” said Leri.

Truckee High has been in session for nearly three months with Carlson at the helm, and he said he is still in the “listening and learning phase.”

“It is going to be a process,” said Carlson. “I’ll take a strong look at where we are and where we want to be as a school and develop those programs and pathways to get there.”

That long-term view of building something over time at Truckee High is a welcome change for district officials and parents who have been seeking stability in Truckee High’s leadership for the last five years.

“It is a rewarding job,” said Carlson. “I think right now that high school is extremely important. The education that students receive during this four-year period is critical — maybe more than it has ever been.”

New Principal Sets Sights on Bringing Stability to Truckee High
Business
9:30 am / 10:00 am