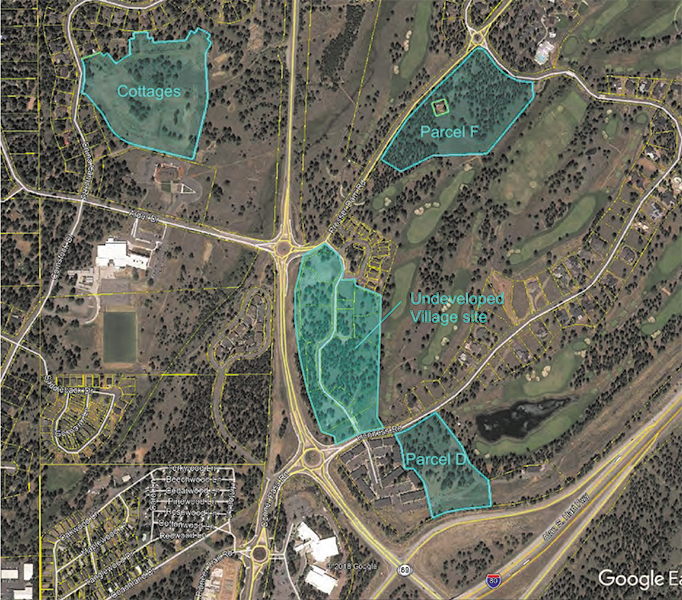 The north Truckee development that fell by the wayside 10 years ago when the market tanked is looking to have a new lease on life, with renewed developer interest and some regulatory housecleaning on the way. Although some residual debt attached to three key unbuilt plots of land still hangs around like a bad smell, developers and local entities are optimistic.

Gray’s Crossing was originally approved in 2004, with solitary developer East West Partners and a unilateral plan. After most of the project was completed — the Gray’s Crossing Golf Course, 377 market-rate single family lots, 17 market-rate townhomes, and 92 affordable housing units — the developer was forced to declare bankruptcy in 2010. Ownership of the remaining properties fragmented at this point, and the specific plan that was originally crafted with a single developer in mind became inadequate to address the remainder of build-out in the neighborhood.

Fast forward to present day: The economy is on the upswing and in the last few months a new proposal for the Gray’s Crossing Village has been submitted by developer North Properties Real Estate, Gray’s Crossing Golf Course owner/operator Tahoe Mountain Club has been sold to local developer Paradigm 8 — which also has rough plans for two other nearby lots, and Truckee Town Council has directed staff to sort out its vision for the entire development. According to a November town agenda item directed at cleaning up the specific plan, it currently has “some deficiencies and lacks clarity since it was intended to be built out by one developer.”

“Right now, we’re trying to find a way to kind of unpack our specific plan so that it works for multiple developers,” said town associate planner Yumi Dahn. “We’re trying to modernize a document, so it actually functions in our current climate.” She says they hope to take this plan to the planning commission on Feb. 19, and town council on March 12. According to Dahn, the updated version would focus on increased density, some reduced commercial space, and especially ensure the project involves an affordable housing element.

The original development agreement with East West stipulated an additional 133 units of affordable housing to be built, beyond the 92 already on the ground, but this requirement expires after March 20. The specific plan does not include any affordable housing past this agreement and the town is doubtful this component will be fulfilled otherwise.

“It’s a little bit of a worry,” Dahn said. “Once [the development agreement] goes away, then there is the potential that no affordable housing could get built in any of these locations.”

Brian Helm of Paradigm 8 said he’s supportive about the work the town is doing to clean up the plan but intends to include an affordable element to any project Paradigm 8 moves forward with, regardless of the looming deadline. Any affordable housing would occur on two key parcels of land, called Parcel D and Parcel F (see map).

“We have been working with the town to try and understand the opportunities that exist at what are called Parcel D and Parcel F,” Helm said. “And really that’s, you know, us looking for opportunities to play-in the housing challenges that Truckee is dealing with, both locals and affordable housing.”

The biggest financial hurdle for Paradigm, or any developer that moves on the undeveloped lots at Gray’s, is the debt that accompanies the properties. The infrastructure in the neighborhood was originally financed by setting up a Mello Roos tax administered by Truckee Donner Public Utility District (TDPUD), on which three of the four primary undeveloped lots are in default. Mello Roos, also known as a Community Facilities District, uses a special tax in addition to property taxes to fund things like public works and some public services.

“The lack of payments of those three large parcels which, you know, bear a decent chunk of the Mello Roos cost allocation, has led to some financial challenges with the Mello Roos,” said TDPUD Public Information Officer Steven Poncelet. The district’s director of administrative services, Lisa Hall, added that the bond is financially sound for the foreseeable future — at least five to 10 years. When a developer steps in, Hall says it would be responsible to cover all past due payments on the bond. Altogether the three lots are just over $3.5 million delinquent, according to the Municipal Securities Rulemaking Board. That’s not the kind of figure that sets a developer at ease, but although Paradigm has not purchased any land at Gray’s Crossing outside of the facilities operated by Tahoe Mountain Club up to this point, Helm believes if he moves forward, his team will be able to make the project pencil, and house locals at the same time.

It’s still early to say definitively, Helm says, but the company has “run enough numbers to feel … we can make a project work without any herculean efforts.” He says inclusionary housing can actually be a better bet than market rate, due to realistic return levels.

“We look at kinda the locals and affordable housing question and say, ‘Well, there’s a lot of unmet demand and to the point that it’s gotten to almost crisis levels,’” he said. “So there’s not much risk on the demand side.”

While Paradigm 8 irons out its plans, another component of the original project that fell by the wayside over a decade ago has been reborn as the Village at Gray’s Crossing. The original plan was submitted to the Town of Truckee in 2006 by East West and a second draft was submitted in 2017 by North Properties. Town staff has since worked with the developer to scale down the retail space included in the plan to about 17,000 square feet and increase the density by including more condo-style buildings, in addition to the proposed townhomes. One notable element that is missing in the current submission compared to the 2004 plan is a 7,000-square-foot grocery store.