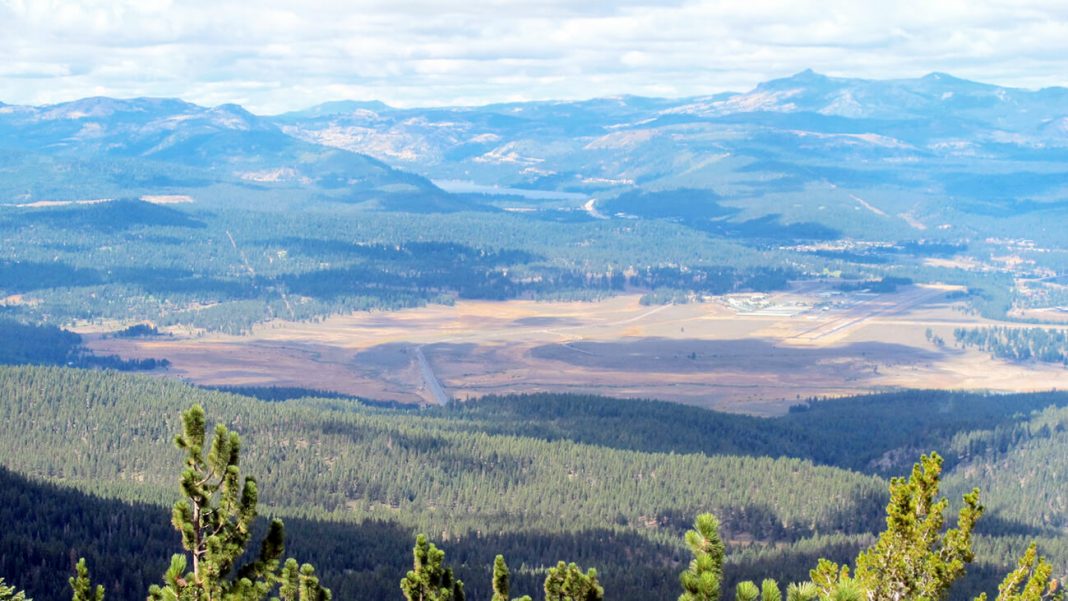 Approval of the Martis Valley West Development was rescinded by the Placer County Superior Court on March 12, based on a failure of the Environmental Impact Report (EIR) to adequately address emergency evacuation procedures in the event of a wildfire. While the involved conservation groups hail this decision as stopping the project dead in its tracks for the moment, the developers seem unscathed and claim to be pleased by the findings. If the developer can clear this hurdle, and it’s a big one, conservationists worry it could set a destructive precedent for future projects to pop up right on the Tahoe Basin rim, just outside the purview of the TRPA.

“Mountainside Partners and Sierra Pacific Industries are generally pleased with the ruling. It affirms the thoroughness and adequacy of the EIR,” wrote Blake Riva in an email to Moonshine Ink. Riva is managing partner with Mountainside Partners, the project’s developer. The county echoed Riva’s perspective.

Deputy county counsel Clayton Cook said that of the two lawsuits brought against the project — the suit by the League to Save Lake Tahoe and another by the California Clean Energy Committee (CCEC), citing the project’s greenhouse gas emissions — the court “denied the lawsuit by CCEC outright, and in the second case, denied the petitioners’ claims on six of the seven issues.” The issue of wildfire and evacuation does bring the project to a temporary standstill in the public process and Cook says the county will “continue to work with the community and the applicant on the remaining legal issue and the project as it moves forward.”

The suit was originally filed by the League, Mountain Area Preservation (MAP), and Sierra Watch in 2016 following a 4-1 vote by the Placer County Board of Supervisors to approve the project.

“It’s been halted right now and there need to be reconsiderations, which is huge,” said Jesse Patterson, deputy director at the League to Save Lake Tahoe. “I think the court’s decision sets us up for the right outcome in the future, which is basically that we need to think about this carefully.”

Careful consideration of the project’s impacts encompasses more than wildfire, according to Patterson, but for now that is the roadblock in the way of Martis West.

“The EIR identifies the area as a very high fire hazard severity zone but then fails to present a sufficient analysis to address Impacts of the Project on emergency evacuation procedures,” reads Judge Michael Jones’ case ruling. “The EIR lacks a meaningful discussion on the issue, relying more on conclusions than facts.”

As the developer and the county address the court’s ruling, conservation groups say they want to highlight a potentially dangerous precedent Martis Valley West might set of encouraging development right on the Tahoe Basin line. Projects with a component inside the basin are subject to an added layer of regulations under the authority of the TRPA, which has deterred many developers in the past. MAP Executive Director Alexis Ollar said that the additional traffic, air quality, greenhouse gas pollution, visual impacts, and light pollution would all adversely affect the Tahoe Basin in a way that is being understated, and the project hasn’t adequately addressed these concerns.

“Really, the biggest loser in all of this is the lake,” Ollar said. “That is one of our biggest concerns, the precedent that it creates for these outside-Basin projects that really leak their impacts into the Basin with no offering of mitigation.”

In the suit, the petitioners claimed that the “EIR omitted any discussion of the Lake Tahoe Basin, rendering the EIR legally inadequate,” according to the ruling, but their contention was denied by the court. Because the project is no longer located in the Basin — the 112 units intended to be developed inside the basin were removed from the original project plan in 2015 — the court ruled that the project’s EIR was adequate and no further TRPA requirements are applicable. Patterson says the recent court decision won’t set legal precedent for future developments just outside the purview of the TRPA, but that is a factor further down the legislative process.

“Typically, these types of decisions don’t set that precedent, but the next decision either in public court or in discussions and settlements beyond yet to be determined — that’s when you really figure out the precedent,” Patterson said.

When asked if the county was concerned if the ruling might have negative repercussions for the basin or set a damaging precedent, Cook replied in an email, “The Environmental Impact Report did evaluate the impacts within the basin, and the court’s ruling was a determination that the county had adequately evaluated those impacts.”

Precedent may come from this ruling in another form, Ollar says, concerning another controversial development to the west: Squaw Village.

“This isn’t going to be the last project that is proposed right outside of the watershed boundary, of course we have Squaw that will be going to court here soon,” Ollar said. “I wouldn’t be surprised, because it’s the same judge, if there is a real serious look at the fire and emergency evacuation analysis knowing that he’s made that determination on Placer County’s ruling on Martis Valley West.”

The Martis Valley West project was officially submitted to the county in 2013, and currently includes 760 homes and 6.6 acres of commercial space to be built to the west of Highway 267, after being scaled back by 600 homes from what it was originally zoned for. Mountainside and the landowner Sierra Pacific Industries have dubbed the project a conservation development due to alterations in the plan that would set aside 6,376 acres of land on the east side of Highway 267 for conservation. Moving forward, the developer and the county have a host of options including appealing the decision or modifying and recertifying the EIR.

“In terms of next steps, we will be evaluating all of the options going forward,” Riva said, when asked if an appeal to the decision was being considered. “Placer County will be responsible for compiling supplemental information for the emergency evacuation plan. The plan will be enhanced to satisfy the court’s request for more detailed information.”