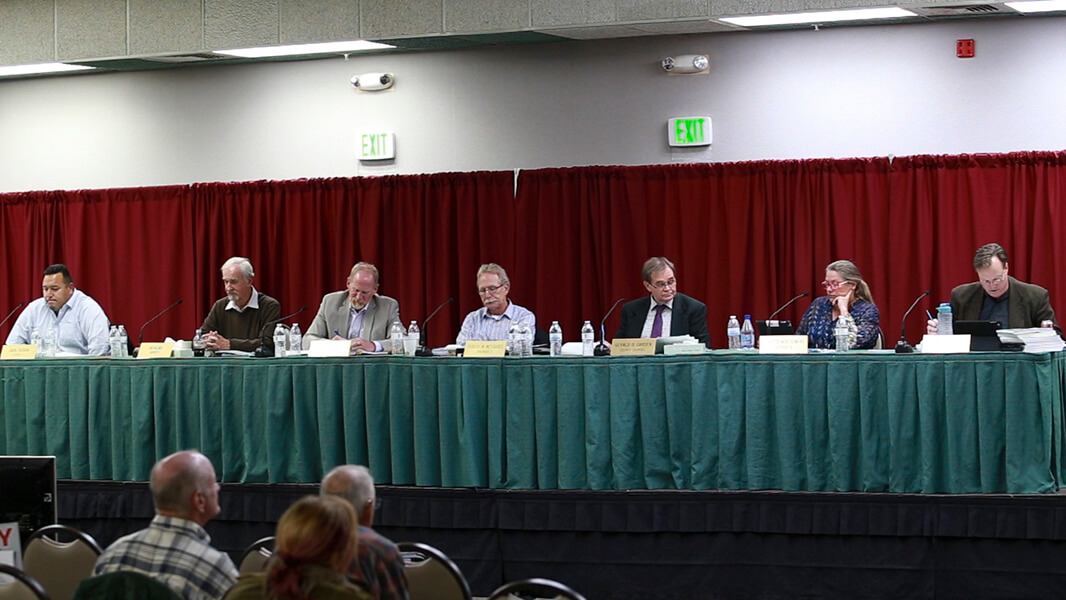 After a long and bumpy road for the Martis Valley West Specific Plan, the Placer County Board of Supervisors yesterday voted 4 to 1 to approve the project at the end of a seven-hour hearing. Despite the Placer County Planning Commission’s rejection of the project, strong community opposition to the development, and even the California Attorney General’s office voicing concerns about the plan, in the end the supervisors were swayed by the high public benefit of the project’s conservation aspect and the reduction in number of homes.

“The opportunity to put into conservation 6,500 acres [sic] and to broaden that with other conservation lands to amount to 50,000 acres, you don’t see that anywhere, especially in the Tahoe Basin,” said Supervisor Jack Duran.

The Martis Valley West project, although officially submitted to the county in 2013, has been in discussions for 10 years. The project includes 760 homes on the west side of Highway 267 in a forested area, 22,000 square feet of homeowner amenities, and 6.6 acres of commercial space in exchange for the preservation of 6,376 acres on the east side of 267, which will create 50,000 acres of contiguous open space from Martis Valley to Mt. Rose Wilderness.

A conservation organization must purchase the east parcel within a set time or it will go into a conservation easement. The developer — Mountainside Partners in conjunction with landowner Sierra Pacific Industries — told the supervisors that they sweetened the deal by allowing a conservation group to raise 50 percent of the appraised value with the remainder to be paid by transfer fees generated by the project. Mountainside also extended the three-year fundraising period to four years to give the conservation group more time to raise the necessary funds.

“For folks to say that there is no public benefit associated with 6,000-plus acres going into conservation … I’ve been doing this a few years and I’ve never seen a project with this kind of open space component,” said Supervisor Kirk Uhler.

The supervisors were also influenced by the project’s reduced density. (Supporters at the hearing wore olive green T-shirts that said, “Conservation. Density Reduction. Balanced Planning.”) The 1975 Martis Valley General Plan originally allowed for up to 12,000 residential units to be built, which was then reduced to 8,600 with the 2003 Martis Valley Community Plan. With some areas like the 1,462-acre Waddle Ranch set aside for conservation, that left 4,742 parcels to be developed. Martis Valley West, which was zoned for up to 1,360 homes, will permanently retire 600 units, leaving 760 units for development. This is a 44 percent reduction of what was allowed in the community plan.

“How is 760 a bad thing instead of 1,360 …. the same parties that were party to legislation are now objecting to half the level of intensity,” Uhler said, referring to the 2013 Martis Valley Operating Agreement signed by the developer and environmental groups like Sierra Watch and Mountain Area Preservation. “I am having a tough time wrapping my brain around that.”

Supervisor Jennifer Montgomery, who represents the Tahoe area, was the lone vote against the project.

The majority of people at the meeting spoke out against the project.

“We are at a tipping point,” said Dana Spencer, a North Lake Tahoe resident. “I don’t want to see this beautiful place destroyed and turned from a rural to urban environment.”

“While we applaud the project’s open space preservation, because of the proximity of the proposed development to Lake Tahoe, we are concerned about the impacts the development will have within the Tahoe Basin,” Rinke wrote. “We are particularly concerned with the project’s resulting increases in vehicular use and traffic within the Basin. These impacts are especially a concern when viewed in combination with the similar impacts anticipated from the proposed 25-year plan for the redevelopment of nearby Squaw Valley. The EIR has not adequately analyzed or mitigated these impacts.”

However, neither the Attorney General’s letter nor the planning commission’s 5-2 vote on July 7 to deny the project appeared to weigh much in the supervisors’ decision.

“I am a little bit concerned about the 18-page [sic] document from the attorney general,” Duran said. “But litigation is never something that drives what we do.”

League to Save Lake Tahoe Executive Director Darcie Goodman Collins said in a statement: “This is bad news for Lake Tahoe. By approving Martis Valley West, Placer County is consenting to threats to Tahoe for which no solution has been proposed. In their decision, the majority of supervisors ignored the environmental laws California has set up to protect important places like Tahoe. This sets a terrible precedent.”

The hearing was officially continued to the Oct. 11 board of supervisors meeting, when staff will provide updated findings, ordinances, and resolutions for the board’s final approval.