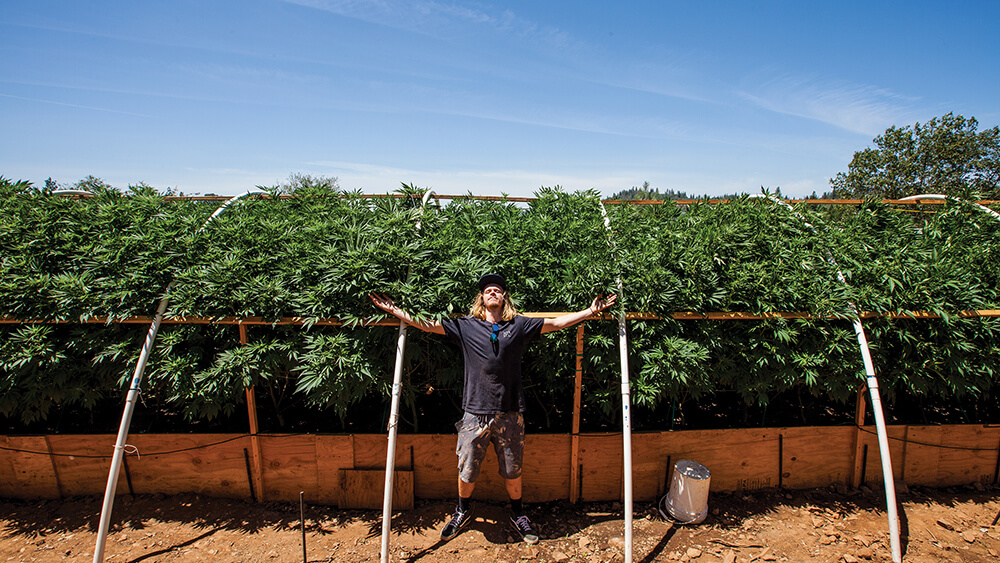 The phrase of the year is “gray area” regarding the Golden and Silver states’ new green issues. Confused? So is everyone else. When California — the first U.S. state to outlaw marijuana, as well as the first state to approve its medicinal use — legalized recreational cannabis alongside Nevada last November, it commenced an unprecedented effort to define what that will mean on a legal, regulatory, and even cultural level.

Legally, California and Nevada share a few hard and fast laws as of Jan. 1, 2017. Both allow the recreational possession and use of up to one ounce of unconcentrated cannabis or 8 grams of concentrated cannabis for users 21 and older, as well as the cultivation of up to six plants, but the sale of recreational cannabis is still prohibited. This paradox will exist until the relevant regulatory agencies begin issuing licenses on the anticipated date of Jan. 1, 2018.

According to Alison Bermant, a lawyer who specializes in marijuana law in the Truckee/Tahoe area, there are “thousands of people growing marijuana in this community.” In spite of these numbers, Bermant says that she hasn’t had a cultivation case come across her desk in more than five years; all of her marijuana related clients are non-locals who were nabbed by one particular CHP agent for transporting illegal amounts of marijuana with the intent to sell. Bermant calls Interstate 80 one of the largest drug trafficking highways in the country, and Truckee is a convenient stopover town on the route to non-legalized states. Bermant says that many of the growers in this community are operating lawfully under Proposition 215, which permitted medicinal marijuana in California in 1996, but their legal protection has an expiration date.

“Right now the state of the law is this gray area, where people, for example growers, are growing cooperatively or as collectives to legally grow under Proposition 215,” Bermant explained. “After January 1 of 2018 that is no longer going to exist as a defense. People are going to have to have an MCRSA license.”

The Medical Cannabis Regulation and Safety Act (MCRSA) consists of three separate bills intended to replace Proposition 215 and outline the regulation and licensing of medicinal marijuana in California. Although the MCRSA was enacted in 2015, the state announced it will need until January 2018 to set up the necessary agencies, information systems, and regulations to begin issuing licenses.

When this occurs, all marijuana businesses will need to obtain both a state and local license to operate. Protocols for obtaining a state license are already in place, but before dispensaries can move to that step, they must get a local license. Whether or not these licenses will be available, however, is still unknown, and up to the counties and incorporated towns.

The Town of Truckee is holding a series of monthly workshops beginning on Feb. 9 in order to address the Town’s approach to cannabis regulation. A questionnaire is also available at surveymonkey.com/r/cannabisdialogue until Feb. 17, where anyone can submit their opinion on how the town should approach regulation. According to Bermant, “It is critical that people who are supporting the regulations and taxation of marijuana answer this questionnaire.”

Jenna Endres, Town of Truckee senior planner, will take the results of the workshops and survey back to her team to create a set of regulations, which they will present to the Town Council and the Planning Commission to vote on as relevant. Endres said that they are striving to find a solution that fits everyone.

“People tend to have very strong opinions on this topic one way or another,” Endres said. “It will be interesting to see where we can build consensus and where our community struggles. Prop 64 did pass in town … people were supportive.”

Speaking out in favor of cannabis is a daunting prospect for many after years of stigma and taboo associated with the plant, as well as the possibility that they might be operating illegally in less than one year, but according to Ann-Britt Hakansson, brand manager of Nevada City-based company Medicine Box, it might be the best way to ensure licenses are provided by local jurisdictions.

“Cultivators are being forced to decide, ‘Is it worth it, do I want to come out of these shadows, do I want to get involved?’” Hakansson explained. “We need a say in this. We can’t just let the Nevada County Board of Supervisors make decisions without any insight, education, or advocacy from the cultivators and the community. In order to make sure they get licenses, [cultivators] almost have to say something.”

Dave A., the president of the North Lake Tahoe delivery dispensary Green Trees Wellness (see business feature, p. 14), views these new laws as a way for the trade to come out of the dark and shed the stigma it has been burdened with. He thinks it will bring the industry up to the standards for testing and labeling that he has imposed on himself, and he wants to work with Truckee citizens to find the best solution that assuages their concerns, but also allows him to operate and serve his patients the best way he can.

“Whether it’s good or bad, we want to know what people think about this, and how we can build something that everybody wins with,” Dave said. “There’s going to be people who don’t want to see any cannabis in Truckee. That’s not a viable future. A couple of thousand local people rely on these services as of right now, so what happens if you take it away? You’re taking away their access. This is a medicine for people and they need it. We want to be able to satisfy and facilitate those needs. And if we don’t have a license on Jan. 1, 2018, I can’t legally do that.”

Until 2018, and possibly for some time after, the law will remain in a state of flux. With the constantly shifting legislation at state and local levels, it is best to stay tuned to the latest developments.

“I have to tell people ‘what I tell you today, might be completely different tomorrow,’” Bermant said. ”It’s impossible to predict how things are going to shape up.”

When Colorado and Washington became the guinea pigs for the experiment of legalization, the rest of the country watched closely, following its many repercussions, and while there was much to observe and learn from, perhaps no factor was watched more closely than the economic impacts.
Four years after the first states legalized marijuana, there has been little evidence of significant change in the gross domestic product, according to data from the Bureau of Economic Analysis, but one area that benefited greatly was state tax revenue. In Colorado — where a 15 percent sales tax on recreational marijuana was imposed, the same as the proposed excise tax rate in California — the state collects $10 million per month in recreational use taxes alone. In a release by the California Board of Equalization, it is estimated that the taxation of marijuana could contribute anywhere from $990 million to $1.4 billion in taxes per year in total increased tax revenue.

Statewide, a 15 percent sales tax will be imposed on both medicinal and recreational marijuana, and for recreational sales this will fall on top of the 7.25 percent sales tax that already exists in the state (8.375 percent in the Town of Truckee). Additionally, a tax will be imposed on cultivators of $9.25 per dry-weight ounce of marijuana flowers, and $2.75 per dry-weight ounce of marijuana leaves. Truckee and other local jurisdictions are also responsible for imposing additional local taxes on the sale of marijuana on top of these rates. The cigarette tax in California also changed substantially on Nov. 8, when Proposition 56 raised the state tobacco tax from $0.87 to $2.87 per pack of cigarettes.

According to their website, the upcoming Truckee cannabis workshops will discuss whether the town will tax medical and non-medical marijuana, what the rates would be, and how those funds would be used. One of the concerns in these discussions will be how the visibility of legal cannabis will affect the local population for whom marijuana is still prohibited: the youth.

Marijuana research and education has come a long way since the Reagan years. No, marijuana does not lead to “reefer madness,” the drug war propaganda of the early 20th century, but it has been shown to adversely affect a regular user’s cognitive functions, especially while his or her brain is in a developmental stage. A study by the National Institute on Drug Abuse, posted on the Tahoe-Truckee Future Without Drug Dependence (TTFWDD) website, links regular use of marijuana to short term impairment of attention, judgment, and other cognitive functions, persistent impairment of memory and learning skills, and long term effects such as the risk of addiction, respiratory illness, and cancer.

The TTFWDD coalition was instituted in 2010 as a response to concerns by the local school district about a problem drug issue among youth in the area. According to River Coyote, project director for TTFWDD, survey data compiled by the school district as well as interviews showed a drug and alcohol use that was far above state averages. Since the coalition was formed, the rate of average drinkers among local students — defined as those who drink at least every 30 days — have dropped significantly: from 36 percent in 2012 to 11 percent in 2016 for 9th graders, and from 52 percent to 31 percent for 11th graders. Marijuana use has dropped as well, but only marginally in comparison: from 21 percent to 17 percent for freshmen and from 31 to 27 percent for juniors. This means that for the first time in the school’s history, more 9th graders use marijuana than alcohol.

“For our 9th graders, [marijuana] is their primary drug of choice now,” Coyote said. “And because that’s never happened, it is significant, it is a cultural difference. Today’s kids are now different than their parents.”

Coyote expects legalization to lead to further reduction in the perceived harm of marijuana, a view shared by most in the drug education community, including Alison Schwedner, director of the Community Collaborative of Tahoe Truckee.

“As a collaborative, we are particularly concerned that legalization will increase commercialization, visibility, and normalization, and the increased visibility will directly impact early and regular youth use,” Schwedner said. “It’s that early use and chronic use that is really concerning. The research around brain development is much more progressive than it was even 20 years ago, and as a result we now know the impacts of using a psychoactive drug on a regular basis on the developing brain.”

At the upcoming Truckee cannabis workshops, residents will have the opportunity not only to learn about and voice their opinion on the possible regulations regarding cultivation, but also sales. According to Schwedner and Coyote, many of the details that will dictate how marijuana is advertised and sold in the community, and therefore how it is perceived by the local youth population, will be addressed at the workshops.

Dave of Green Trees Wellness agrees with the need to regulate cannabis in order to diminish its exposure to children.

It is still against the law for anyone under the age of 21 to buy, cultivate, or use marijuana recreationally, and providing marijuana to someone underage is still a felony charge in California and Nevada.

“I think we have to be responsive and we have to be mindful and evolve as our local jurisdictions develop policies that will really impact the kids in our community,” Schwedner said.

Legalized It
Sports & Outdoors / Wellness
10:00 am