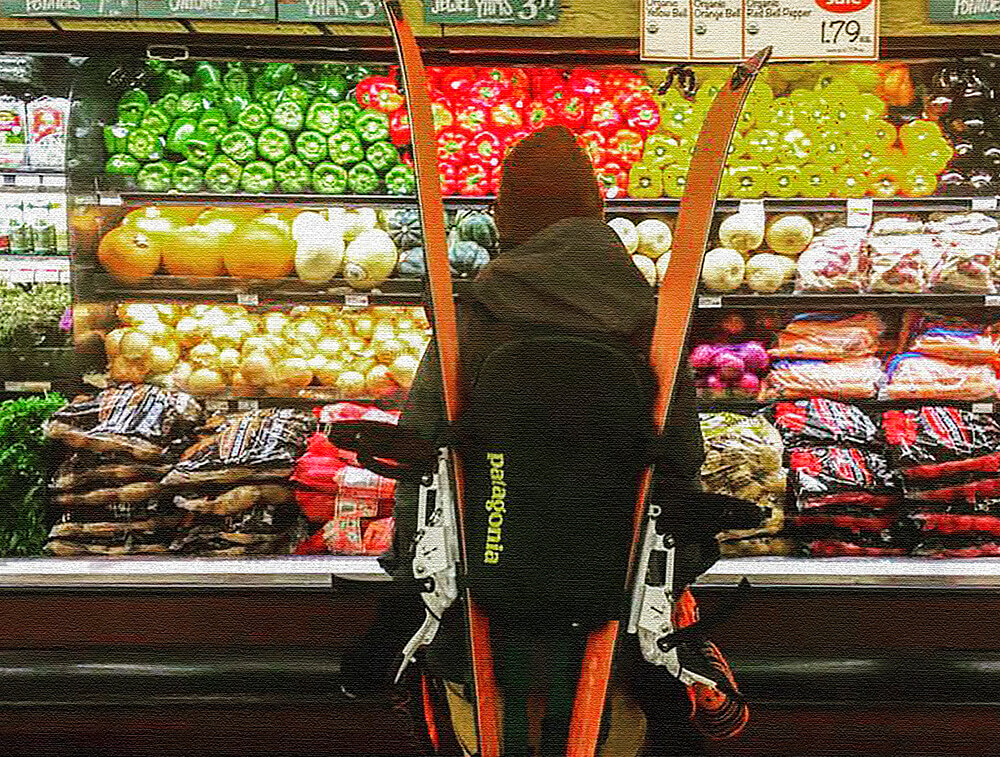 Ninety-nine percent of the species to live on Earth are extinct. Meteors. Over-hunting. Low sex drive. Extinction has taken many forms over the years, but the uncontested winner is habitat loss. Enter the modern Lake Tahoe ski bum. Shackled with an incompatible ratio between median income and median home price, the modern ski bum’s diminishing habitat is fueling an extinction that could mean the end of the ski town as we know it. (At least low sex drive isn’t the issue.)

The caveat to calling out extinction in this case, however, is defining the culture that is threatened. A bum is commonly viewed as existing on society’s periphery; their time spent goes by relatively unnoticed. But in ski towns this has never been the case. Here, the ski bum has always been the protagonist, a cultural icon exemplifying the reason we all shovel our way through Sierra winters and make the sacrifices necessary to live in a mountain town. But are we losing this unspoken hero? As ski towns become increasingly gentrified, the ski bum has two choices common in the natural world: disappear, or adapt and evolve. To find out which, we spoke with a handful of local icons to define this endangered culture, and how it’s holding on.

When I first asked Rick Sylvester (Does the name Sylvester’s Slot ring a bell?) what makes a ski bum, he said he couldn’t quite put a finger on it. After about an hour of spinning yarns about his days back at Squaw during the ’60s and ’70s, he landed on a quote by the famous tightrope walker Karl Wallenda: “Walking the line is living, everything else is waiting,” Sylvester said, laughing. “That’s the ski bum mentality.”

Sylvester started skiing in his last year of high school in 1959/60, tripping up into the mountains from his home in Beverly Hills, and later taking some of his first lessons at Sugar Bowl from Jim McConkey, Shane McConkey’s father. After Sylvester graduated from UC Berkeley, it was climbing that originally shaped his life. His roots in the “ski bum” lifestyle developed from the time he spent in Camp 4 during Yosemite’s golden years. “I’d get disabused of my notions that climbers were the last of the romantic heroes; we’re dirtbags,” said Sylvester. “The term came out of Camp 4, and I was among the dirtiest and most disheveled.”

Sylvester refers to his group as the “resident climbers,” and says he and his pre-stone-master companions were the first climbers to stay in Yosemite for the whole climbing season in the fall and spring. The goal was to stay in the mountains for the whole year, and in 1968 Alpine Meadows Mountain Manager Norm Wilson published an ad in a climbing magazine that provided that exact opportunity. The ad was for open ski patrol positions, and simply said in bold print:

“Wanted. Mountaineers for extremely dangerous and hazardous work in the winter environment using explosives. Must be able to ski.”

Bingo. By that winter Sylvester was working ski patrol at Squaw Valley and living with a handful of other climbers in a house on Grove Street in Tahoe City. His living situation at that time? Sleeping in the kitchen next to the refrigerator. Eventually the climber occupying the couch (Jim Bridwell) moved into a room upstairs and Sylvester ended up on the couch for the rest of the winter.

“Every evening I’d fall asleep on the couch with my ski clothes on, and then after a few hours I’d wake up and have just enough energy to make some dinner then go back to the couch,” Sylvester said. “Then I switched from Ski Patrol to Ski School. We just wanted the free season pass, and the question was, ‘did you get more skiing on patrol or as an instructor.’”

Even after getting the ski instructor job, his employers made sure to make it clear that he and the other new hires better get a second job, because instructing wasn’t going to cut it. Sylvester got a gig waiting tables at Granlibakken and collected unemployment in his off time, proving that some things haven’t changed much here in Tahoe.

“That was my formative period up here,” said Sylvester. “I guess that was as close to ski bumming as I’ve been, though in a way it’s more a mentality than what socio-economic class you’re in.”

So what’s changed since Sylvester was bumming his way through Tahoe, logging first descents at Squaw, and hucking himself off El Capitan for ski movies or Mt. Asgard for James Bond films? Population. Sylvester watched as skiing became exponentially more popular and ski towns slowly became what he calls “mountain suburbs.” He became so tired of the frenzy on the hill that he spent twenty years exclusively skiing the backcountry. He says when the crowds come during the holidays now, he usually hides under the bed.

“The first years I was up here I assumed that everybody was just up here for the skiing, but for many people that’s no longer the case… People just found this as an attractive alternative to the city,” Sylvester said.