Home Sections News In the Business of Giving 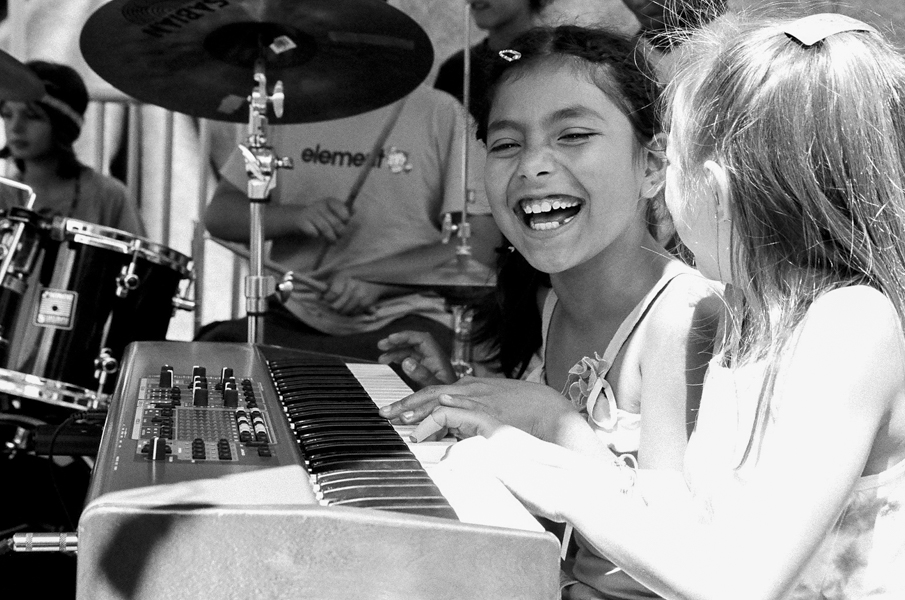 It’s not uncommon for businesses in Tahoe and Reno to support their communities, be it by donating raffle gifts, providing food for events, or volunteering time. But some take their altruism to the next level by harnessing their personal passions and creating beneficial events for the community. These business owners pour their hearts into projects that take time and money to accomplish, but don’t turn a profit. All for the simple pleasure of building up the community they love.

For JJ Morgan, managing partner of Moody’s Bistro, Bar & Beats in downtown Truckee and former owner of a jazz club in San Francisco, music is an essential part of life. Twelve years ago, he started Moody’s Jazz Camp, which brings an immersive hands-on music experience to area youth.
“For me … it’s my favorite thing, I love to do it,” Morgan said.

Morgan invites professional musicians from across the country, even from around the globe, and for a week they interact with up-and-coming young musicians. Students learn sophisticated techniques, killer new songs, and jamming skills from musicians like San Francisco darling Adam Theiss, avant-garde pianist Peter Apfelbaum, New York saxophonist Kenny Brooks, and even hip-hop performers like M.C. Radio Active.

“I think that specifically music, music education, it makes you a smarter person,” Morgan mused. “Just the camaraderie of it, and playing with your peers and being creative and going out on a limb. There are so many lessons that music can give you, and you’ll have that for your whole life.”
Morgan said he usually has about 60 kids enrolled in the program and offers free tuition for local children. He likes that his camp takes music education out of the academic school setting, where it can sometimes be seen as a chore or “uncool,” and shows kids what being a musician can look like in real life.

“I saw the void and wanted to help,” Morgan explained. “The teachers are obviously atypical, they’re not teachers; they’re professional musicians. I think that’s one of the things the camp does, it really fires [students] up, shows them the ‘cool’ component of music.”

Morgan added that the camp is also a gift to the community, because the famed musicians that teach also play every night at Moody’s with special guests.

“When the guys play at night, the kids come and sit in with them,” Morgan said. “That really fires them up. It’s packed, they’re playing in front of a crowd, they’re nervous. It’s kind of like their first gig.”

And for his part, it’s not all fun and jamming, Morgan says. In leaner financial years, it has been challenging to stay committed to a project that doesn’t make his business money. But Morgan is so passionate about providing an avenue for true music education that not having the camp isn’t even an option in his mind.

“The longevity has to do with if you love it or not,” Morgan affirmed. “If it’s something that you’re not passionate about, it’s pretty hard to stick with it for a long time, and to weather the storm. It’s not easy when your business is struggling, it’s not easy to continue to do something that costs money, that isn’t going to help you make money. So you better be passionate about it.”

This year’s camp will be held July 17 to 21, and is open to kids ages 9 to 18 with some musical experience. Info: moodysjazzcamp.com

Brendan Madigan, owner of Alpenglow Sports in Tahoe City, said his passion is enticing people to experience the mountains, with a special emphasis on human-powered sports. Community-mindedness is a primary part of his business mantra, which led him to create a string of events “that are compelling and fun and free,” as Madigan puts it.

Alpenglow’s Mountain Festivals, held in summer and winter, are geared toward exposing beginner and intermediate athletes to alpine sports like trail running, paddleboarding, backcountry skiing, and snowshoeing. Festival participants can demo equipment and learn more about a new sport in a fun and free environment.

The weeklong Summer Mountain Festival will return for its fifth year from July 17 to 25, boasting its biggest itinerary yet, with more than 50 activities to choose from. The events span the North Lake Tahoe area, with educational offerings like rock climbing clinics and first aid classes; guided excursions like trail runs, hikes, and SUP tours; and even a heart-pumping competitive trail running race: The Broken Arrow Skyrace.
The Winter Film Series benefits the community in two ways. First, it provides a free source of entertainment. Second, it’s also a very effective fundraising effort. Donated top-shelf gear is raffled off, and in return a local nonprofit receives the proceeds from the ticket sales. Madigan stated that around $6,000 to $8,000 is raised for the beneficiary organization in a single movie night.

“These nonprofits are small, so that amount of money, that could be a huge percentage of their operating budget,” Madigan said.

In the age of internet shopping, Madigan recognizes that customers could go anywhere to buy their gear, but they choose to shop at Alpenglow. So he wants to make sure he is giving the community something in return for its support.

“It comes back to our community-minded business model,” Madigan said. “We do feel strongly about giving back because in this day and age, you can buy stuff anywhere, and the fact that people have supported Alpenglow for almost 40 years means a lot to me. So we feel an inherent responsibility to give back.”

Madigan, like Morgan, knows that to have success in your charitable projects, you can’t be in it for the wrong reasons. You have to be just as genuine as the community you are aiming to support.

“It’s gotta be authentic,” Madigan said. “It’s a tremendous amount of work, it’s hard work, but at the end of the day, if you’re giving back to people and you see how stoked they are after skiing an untracked powder line or going on a trail run with a killer lake view, that is very, very fulfilling, and, to me, way more important than any kind of business proposition, or trying to make money off of it. You’ll fall on your face if that’s your motivation.”

For Jessica Schneider of Junkee Clothing Exchange, the mission was bigger than a single or even a series of events: she was at the forefront of building up the Reno MidTown community that her business resides in.

“We’re kind of the pioneers of the MidTown district,” Schneider said. “It took a lot of work and a lot of time to get to where we’re at.”

Junkee, which Schneider describes as a “15,000 square foot junk store,” sells costumes, clothing and antiques at reasonable prices, and this year celebrates nine years in business. When Schneider started Junkee, MidTown looked much different than it does today, she said. Barbed wire fences lined the “shady area,” but she saw its potential, and almost a decade later it is a focal business district with an artsy core.

To get to this point, Schneider helped launch the MidTown Merchants Association nine years ago and served as president for five years. The district now has its own website, and the mission statement speaks to Schneider’s vision: “You’re part of a movement, a living breathing force in Reno’s most culturally diverse and artistic district.”

“We’re all small businesses trying to make it. There’s no Applebee’s around us,” Schneider said. “I just want to make Reno a better place to live. That’s the reason why MidTown is thriving … not everyone goes and gambles. So the locals really picked up with MidTown.”

While Schneider has remained involved in everything MidTown-related, including being an advocate for artistic space in upcoming street and sidewalk renovations in the neighborhood, she considers the biggest success to be the growth of the Reno Midtown Art Walk. “It really is focused on the thriving art community, and that’s probably our biggest accomplishment,” she said. What started as an event that drew about 60 people has grown to thousands of participants. With the help of a map, they go from business to business and see artists in action, whether playing music, making charcoal drawings, or even sharing their poetry. In its ninth year, the Art Walk will be held July 27.

And Schneider’s involvement with the ins and outs of the MidTown community won’t end any time soon: “I’m here for the long haul,” she promises. “Junkee’s already been here nine years; I plan on being here forever. It’s really important for me [to be involved]. You have to get involved or you could have a street with no benches, no artistic flair, and not one tree, if you’re not on top of it.”

To find out more about the Midtown Art Walk, visit renomidtownartwalk.com.

In the Business of Giving
Sports & Outdoors / Wellness
10:00 am

In the Business of Giving
Education
7:00 pm