Home Sections News If You Build It, Will They Come? 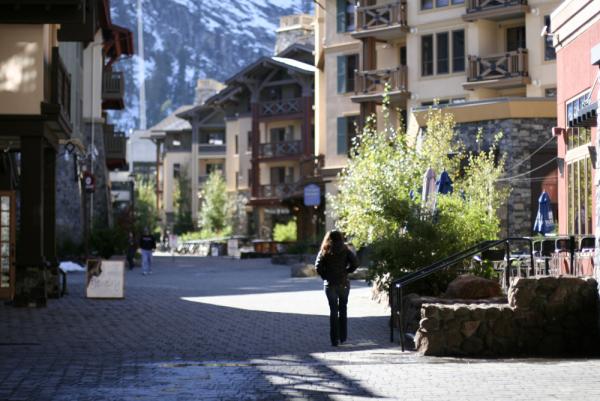 Even before KSL Capital Partners announced in September Squaw Valley USA’s merger with Alpine Meadows Ski Resort, the company was already working on preliminary plans to expand the village. KSL says there is currently not enough bed base to support businesses in Squaw, and thus wants to quadruple the number of lodging units in order to attract more destination visitors and create a financially viable village. The 70-acre development proposal, planned for the east parking lot, also includes some commercial space and parking structures. But two issues that have always plagued Squaw Valley and hampered future development also apply to this project: Will there be enough customers in the off season to support more businesses, and is there enough water?

In August, KSL submitted a pre-development application to Placer County for an all-season resort that would include around 1,200 units (3,800 bedrooms), which would be a mixture of residential, hotel, time-shares, and condos. The 1,200 additional units are allowed under the Squaw Valley General Plan.

‘We need more critical mass for bed base,’ said Chevis Hosea, vice president of development for KSL. ‘We got a great mountain, but it’s not supported by a village. The village is not financially sustainable.’

Currently, there are 300 rooms in the village and 53,000 square feet of commercial space. Hose said that the original developers, Intrawest, built a disproportionate amount of commercial square footage compared to bed base. That explains in part why some businesses in the village have struggled to make ends meet. Rainbow Bridge is one of those. After four years in the village, owner Sharon Freewoman called it quits in May.

‘The village is dead as it is,’ she said. ‘I couldn’t afford to be there anymore. It was great on days when they had something going on, like a festival, but the spring and fall just kills you. There’s nobody out there.’

Kali Kopley, who owns Soupa and Uncorked, said that business has gotten better with increased marketing and more summer events in the village, but she remembers when times were not as good.

‘The village used to feel like a ghost town,’ she said. ‘It was not thriving if you looked at it like a guest.’

KSL hopes that by building more bedrooms, it will change the shoulder-season problem, a type of ‘if you build it they will come’ philosophy.

Elsa Corrigan, owner of Mamasake, agrees with KSL’s solution. She said that one of the reasons she decided to open her restaurant in Squaw is because two more phases of the village, with more lodging, were supposed to be built. But that never happened.

‘It does make a huge difference,’ said Corrigan. ‘I do suffer as a business. Business is bad in May and June and October and November. There are not enough people here.’

That’s what KSL hopes to change by upping the number of bedrooms at the base of Squaw. Right now, there are around 600 rooms, including those in the village, immediately surrounding the mountain. The private equity firm wants to reduce reliance on day skiers by enticing people to stay longer, thereby spending more money in the village.

‘We are adding more permanency so people come for two or three days as opposed to just coming for the day,’ Hosea said. ‘We want to create a vibrant village.’

Corrigan likes the idea of expanding the village, as long as it includes housing for employees and full-time residents.

‘We need warm bodies here all the time, not just coming and disappearing, so not all the air is breathed out of the place when there’s no skiing,’ she said.

But others question the logic of trying to bring more people to a mountain that already seemed like it had reached capacity on busy storm days last winter. Jamie Schectman, founder of Mountain Riders Alliance, which seeks to develop sustainable ski areas, remembers standing in lift-lines at Squaw for over 30 minutes.

‘My biggest concern is that the mountain can’t handle additional traffic on non-sunny days,’ he said. ‘KSL has issues they have to take care of before they can think about expanding the bed base.’

Ed Heneveld, a 34-year resident of Squaw Valley, has seen other developments in the valley, like the Resort at Squaw Creek and Intrawest, try to achieve the same thing — bringing in more destination tourists — and not be successful.

‘For KSL to think it can come in and be able to develop the village and entice visitors to come here and be more of a destination, I’m not sure that is sustainable at this point,’ he said.

While KSL firmly believes that it can make the village a thriving business community by building more lodging, it might have a harder time finding the water for the expansion. Squaw Valley Public Service District General Manager Mike Geary has his share of concerns.

‘For those many rooms, I highly doubt there is enough water,’ Geary said. ‘We’d be looking for additional sources.’

The SVPSD has four wells that supply most of the valley. While its existing wells would not be able to support KSL’s project, the developer can always look for water in other parts of the valley and drill additional wells. However, new wells would require a water treatment plant due to high levels of iron and manganese in the ground.

KSL, which has conducted its own groundwater studies, is confident that the water is there.

‘We believe there is an adequate supply to support the development,’ Hosea said.

And with the recent Squaw-Alpine merger, Hosea said a bigger village is needed now more than ever.

Heneveld, who is also affiliated with the Friends of Squaw Creek but was speaking as an individual, is not sure that KSL will succeed where Intrawest failed.

‘There is a limitation of water,’ he said, ‘That’s why Intrawest’s phase III and IV stalled to the point that the questions were never really answered … Is there enough water, and how much is well-pumping affecting Squaw Creek?’

If You Build It, Will They Come?
Event Type / Food & Drink