Home Sections News ‘I Was There’ 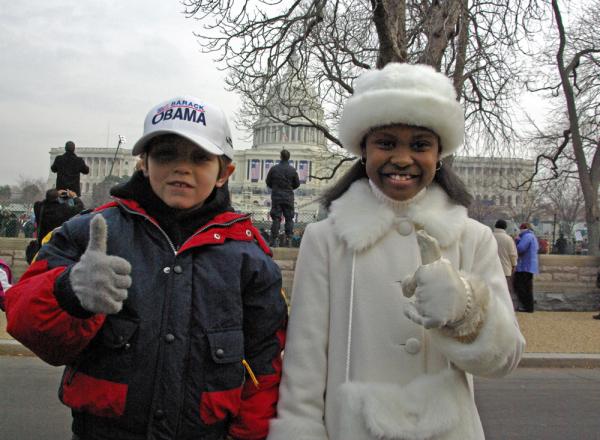 I stood watching as the U.S. Capitol Building was being prepared for the inauguration of our 44th President, Barack Hussein Obama. There were people everywhere – taking photos, buying President Obama buttons, setting up chairs, delivering port-a-potties, securing the perimeters. On the stairs of the Capitol was a rehearsal for the next day’s ceremony.

The sound of Yo-Yo Ma’s cello caressed the mall with the gentle reminder that it is ‘a gift to be simple, ‘tis a gift to be free,’ a sound so sweet it warmed the frigid air. It was a moment to pause and be in the moment. I dreamily heard my mother behind me, telling my 8-year-old son, Luca, that when she was a little girl growing up in Galesburg, Illinois, the black children had to drink from the ‘colored’ drinking fountains and they couldn’t swim in the public pools. I was about to join in their conversation, when I heard an almost inaudible sob from my father on my other side. I turned to see tears rolling down his cheeks as he listened to my mother’s story accompanied by the haunting music. I immediately joined him in his tears. There was a quiet pride, a deep respect, and a resonance of forgiveness in the air. The softening of peoples’ hearts was palpable.

Just then the most beautiful little girl passed in front of me with her family. She was dressed in white from head to toe in her inauguration finery. From her satin gloves to the furry purse, her outfit spoke to me of angels and abundance, of a pure heart and a clean, blank page on which to write a future for our children. I wiped the tears from my face and jumped into reporter mode. Josselyn Joanem, 8, traveled all the way from Chicago with her family, ‘To get to be a part of history.’ Her black face beamed as she stood beside Luca for a photo in front of the Capitol building, an illustration of the fact that racial barriers are now history.

I asked Luca what was so important about the Inauguration. ‘We get to see the first black President sworn in.’ He paused, ‘Well actually, I think Lincoln was a little brown.’ He’s not far off, but it’s a good thing I bought him those books on the Presidents. According to his criteria, Clinton can probably also be considered, ‘a little brown.’

I asked him what was most surprising about the inauguration, and he responded, ‘That there was hot chocolate.’ Maybe someday he’ll realize how amazing it was that with nearly 2 million people in attendance there were no ‘incidents,’ and that we all lived closely for the moment in peace and harmony.

Thousands of children braved the cold, walked for hours, and held their ground in a thick and ever moving sea of puffy down jackets. Here are some of them.

‘Tis the gift to have friends and a true friend to be,
‘Tis the gift to think of others not to only think of ‘me,’
And when we hear what others really think and really feel,
Then we’ll all live together with a love that is real.
~ Last verse of ‘Simple Gifts’

‘I Was There’
Arts & Culture