As we approach the holidays, I would like to share a beneficial way to give to charities that also benefits the donor. Seniors who hold Individual Retirement Accounts must take Required Minimum Distributions each year beginning at age 72 — even if they don’t need or want the funds. That RMD increases the IRA holder’s total taxable income, which could push the taxpayer into a higher income tax bracket or trigger phaseouts. These sometimes trigger high taxes on Social Security income.

One method of saving taxes and giving to charities is to make a Qualified Charitable Distribution. A QCD enables an individual to fulfill their required minimum distribution, in whole or in part, by a direct transfer of up to $100,000 to charity. Qualified Charitable Distributions can also be used to support multiple charities as long as the sum of the distributions is within the $100,000 limit. But because QCDs don’t increase taxable income, both higher tax rates and phaseouts can be avoided.

In addition, because QCDs reduce an IRA’s balance, they may reduce future required minimum distributions. A QCD is also not counted toward the maximum amount deductible for those who itemize their giving on their taxes — the $100,000 can be above and beyond those limits. For these reasons, a QCD can enable a donor to give a bigger charitable gift than they would be able to if they just donated cash or other assets.

Qualified Charitable Distributions are made to the eligible charity directly from IRAs and Simplified Employee Pension plans. The transfer never passes through the hands of the IRA holder. Instead, the IRA custodian can either send a check directly to the charity or to the account owner, who then hands it over to the charity. For a QCD to count toward your minimum annual IRA distribution, it must be made by the same deadline as a normal distribution, which is usually Dec. 31 of the tax year in question.

An individual donor can contribute up to $100,000 (married persons $200,000 with each party contributing $100,000 from their respective IRA) per year in QCDs as long as that individual is at least 70½ years old. A donor can make one large contribution or several smaller ones over the course of the calendar year. Remember that QCDs can be made from any or more than one of the IRA types (traditional, inherited, inactive SEP, and inactive SIMPLE IRAs).

For example, Mary, a 74-year-old widow who has an IRA of her own and an inherited IRA from her late husband, has two favorite charities. She has income from other sources, including an after-tax investment account and rental from property she owns. Mary is required to distribute $50,000 to herself in 2022 as her RMD but does not need the extra funds. She provides her IRA account representative them with an instruction to issue a $25,000 check to the Friends of the Truckee Library and a $25,000 check to the Humane Society of Truckee-Tahoe. She can make the QCD from either or both IRAs. 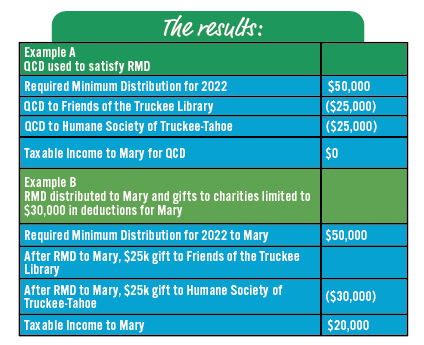 If Mary were in a combined federal and state tax bracket of 52.8% (39.5% federal and 13.3% California), she would incur additional tax due in the amount of $10,560 in Example B and none in Example A. Example B makes assumptions about Mary’s income tax bracket and limitations. In some cases, the results are more dramatic when the deductions are further limited or even eliminated.

A QCD can provide several benefits for donors who:

• Are required to take a minimum distribution from an IRA, but don’t need the funds and would face increased tax liabilities if they took the distribution as income.

• Would like to reduce the balance in an IRA to lower future required minimum distributions.

• Would like to make a larger charitable gift than they could if they simply donated cash or other assets. The value of charitable gifts that can be deducted from a tax return usually varies from 20% to 60% of the donor’s adjusted gross income. This AGI-based limit does not apply to QCDs, allowing donors to make larger gifts.

• Do not wish to make their contribution to a foundation or donor-advised fund.

• Have identified which charities they want to support immediately with a substantial gift.

If you are considering a large charitable donation, a certified public accountant or financial advisor can help minimize your tax liability and maximize the value and impact of your gift by choosing the right strategy or combination of strategies for your situation.

~ Truckee resident Michael E. Graham is a certified specialist in estate planning, trust, and probate law with MOBO Law. He’s been a Rotary Club member since 1980, helped incorporate the Tahoe Truckee Excellence in Education Foundation, and has served as pro bono legal counsel to the Truckee Tahoe Community Foundation.

How to Give via a Qualified Charitable Distribution
Business
4:30 pm / 5:30 pm

How to Give via a Qualified Charitable Distribution
Sports & Outdoors / Wellness
5:30 pm / 6:15 pm

How to Give via a Qualified Charitable Distribution
Sports & Outdoors / Wellness
5:30 pm / 6:30 pm

How to Give via a Qualified Charitable Distribution
Sports & Outdoors / Wellness