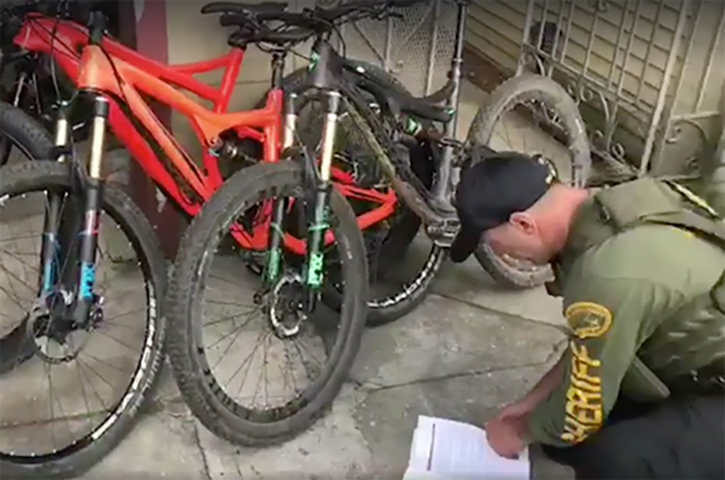 After a string of high-end bike thefts occurred in the North Lake Tahoe/Truckee area and Carson City this summer, the Placer County Sheriff’s Office and Truckee police detectives have arrested the San Francisco brothers responsible for the widespread thefts. On Aug.19, the four adult males, Jesus Gallardo (25), Sergio Gallardo (23), Martin Gallardo (27), and Juan Carlos Gallardo (29) were charged with multiple counts of grand theft, criminal conspiracy, and possession of stolen property — all the men were booked in the Truckee Jail with a $750,000 bond.

The team took numerous hours of surveillance with bait-bike operations during the investigation. Some surveillance images caught the suspects committing the thefts, but no identifiable information was established. Investigators were able to determine the make and model of an associated vehicle; however, no license plate could be identified.

On Saturday, Aug. 19, at 10 p.m., a Truckee police officer was patrolling a location of previous thefts when he located a possible suspect vehicle. The officer made an enforcement stop of the vehicle and with the assistance of other Truckee police units detained the four adult males. The officers were able to establish enough information to arrest the suspects for the bicycle thefts.

After the arrest, Truckee police detectives served search warrants for the suspects’ vehicles and a residence in San Francisco. Along with Placer County Sheriff, detectives, and support from the San Francisco Police Department, investigators discovered $70,000 worth of mountain bikes, road bikes, and related components. The dollar value of all the items taken from Truckee/Tahoe region is estimated to be more than $125,000.

The Truckee Police Department is now taking inventory of each recovered item to locate the owners.

Hitting the Breaks
Sports & Outdoors
12:00 am