Home Sections News Getting Back on the Chairlift 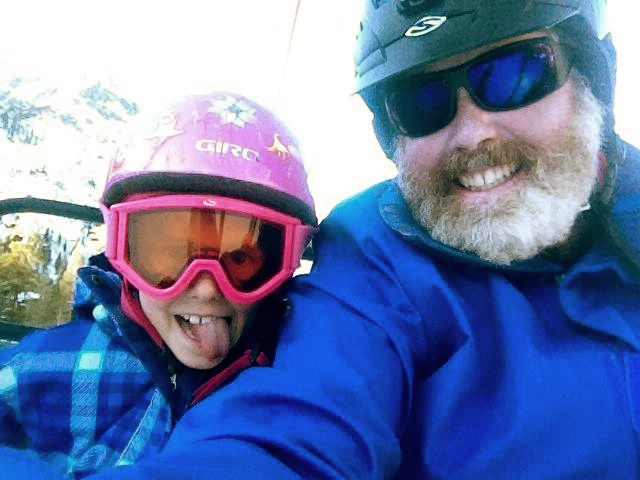 It was St. Patrick’s Day and I was trying on bridesmaid dresses for my sister’s wedding at a San Francisco bridal boutique when I got the call that no parent wants to receive — my 6-year-old daughter, Kaya, had fallen off a chairlift at Alpine Meadows and broken her leg. The ski school official could not tell me anything more. It was not until my husband called a few torturous minutes later that I was filled in on the details — Kaya had fallen 25 feet off of Lakeview Chair, she had a compound fracture of her left femur, and she was probably going to be airlifted to a Reno hospital. I suddenly felt very far from home, and very scared.

As I frantically tried to hail a taxicab to take me back to my car, my husband called again. Kaya was complaining about difficulty breathing. She was ambulanced to Tahoe Forest Hospital, where an MRI revealed that she had a punctured lung and a lacerated spleen, in addition to her broken leg. She was then transported to Renown Medical Center, which has greater pediatric capabilities.

I drove from San Francisco to Reno in three hours flat, somehow managing to see the road between the tears that were constantly streaming down my face. I arrived just in time to see Kaya before she was wheeled into surgery. She looked at me with a glossy, drugged stare and said, “Mommy, I didn’t even cry.” I burst into tears. Then the anesthesiologist turned to me and said, “Your daughter’s injuries are very serious.” That did not help me compose myself any.

Kaya spent the next two days in pediatric ICU. Those were a long two days. My husband stayed in the hospital with Kaya, and I went back and forth to Tahoe to be with our other two children. It was a lot of driving with bloodshot, puffy eyes. On the third day after her accident, confident her lungs were okay, the doctors said she could go home. We all breathed a sigh of relief. Kaya’s left leg now had a steel plate and seven screws in it, and a scar that stretched almost the entire length of her thigh, with a little hook like a candy cane where the bone had cut through her skin. She would be in a wheelchair for the next eight weeks, and endure another surgery six months later to remove the hardware. But she was going to be okay.

Her leg would heal, but the emotional scars lingered. Kaya, as to be expected, swore off skiing. She didn’t want anything to do with the sport, ever again. She was completely terrified of chairlifts, even gondolas. In Aspen this summer she refused to take the gondola up the mountain, and almost had a panic attack when her dad took her up the Squaw Valley Cable Car to swim at High Camp. When people asked her if she would ski again, the answer was always the same — an absolute, emphatic NO!

And who could blame her? I didn’t care if she skied again, but I wondered if it would be hard for her growing up in a ski town, with all her friends skiing on weekends, if she didn’t participate in an activity that was such a big part of Tahoe culture. I wrestled with how I could best help her heal psychologically — should I push her to confront her fears, or stand back and follow her cues? In the end, I decided on the latter. I had a feeling that, even with all of her vehement opposition to the sport, time and snowfall would be the ultimate healers.

Around the beginning of December, after the first major snowstorm and many of her friends had started ski team, Kaya announced, much to our delighted surprise, that she wanted to ski. She had some rules, of course — she did not want to do a ski program, she would only ski with her dad or me, she wanted to ski at Alpine (which shocked us), and she wanted to start on Meadow Chair. Yes, yes, yes, and yes! Whatever she wanted, we would oblige. She hadn’t even stuck her foot in a ski boot yet and I was already bursting with pride. At only 7 years old, she was willing to take another shot at the sport that, 10 months prior, could have killed her. I thought she was more courageous than many adults would have been in her shoes.

On a Friday in early December, we took Kaya and her brother out of school early for the momentous occasion. I was nervous and proud as I watched her load Meadow Chair with her dad. She clung to him for dear life on the chair, and they were both so focused they forgot to put the bar down (a major no-no in our family now). But with each run, she became more and more relaxed, and soon she was clamoring to ride Round House. She skied the next day as well, and took another big step when she agreed to go skiing with a friend and her mom. Now all she wants to do is ski. Weekend mornings, Christmas vacation — she was ready to hit the slopes.

People have asked me why I haven’t written about Kaya’s accident before, and I didn’t really know the answer. But now I do. I was waiting for her to fully heal, to come full circle, to have something to write about other than chairlift safety, how and why she fell, and our family’s ordeal. Physical healing comes with rest and time, by letting the body do its thing, but emotional healing is more of a conscious effort. Even though she is just a little girl, Kaya was able to stare fear right in the face, climb up on it, and take it for a ride up a mountain. My daughter is now my role model. As the American journalist Dorothy Thompson said, “Only when we are no longer afraid do we begin to live.”

Getting Back on the Chairlift
Sports & Outdoors / Wellness