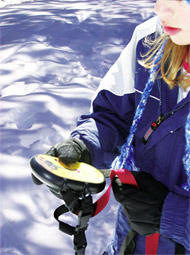 In a moment of panic, we rely on our reflexes. And if our lives are on the line, these reflexes are crucial. Living in the Sierra Nevada, with massive amounts of snow and unpredictable weather, we all run the risk of finding ourselves in a sticky situation. Maybe you try to take a shortcut home, only to realize hours later that you’re lost. Perhaps you did not bring clothes warm enough for the sudden snowfall. Or you thought you had more time before nightfall

In 1976, as most locals tell the story, two boys were skiing at Northstar-at- Tahoe when they decided to take a shortcut home. After they dropped off the backside of the ski resort toward Lake Tahoe, a snowstorm moved in quickly. The boys got lost and one, 12-year-old Lance Sevison, lost his life.

The tragic deaths of these young mountaineers left their parents, teachers, and the community searching for answers. One answer, the highly successful Tahoe Nordic Search and Rescue Team, owes its beginnings to help and guidance from Lance’s father, Larry Sevison.

Another idea was to engrain in children the critical reflexes needed for winter living in the mountains. The result, driven by dedicated local teachers, has had a lasting impact on our children, not only in this community, but also around the nation.

“We were determined not to lose another student before we tried to do something,” said Sally Frazier, a teacher at Kings Beach Elementary School at the time. Sally and two fellow teachers, Rosemary Montgomery and Paula Stahl, began soliciting and compiling information on winter survival skills.

“We wrote all over to different search and rescue groups for information,” Sally said. “We didn’t know what we were talking about, we just knew we needed to find information to help teach our kids.”

As they compiled, they realized there was no information out there geared specifically toward teaching children. It was up to them.

The interest in developing a program spread district wide and elementary school teachers from across the Tahoe Truckee Unified School District formed a committee.

Curriculum taught in schools is usually dictated by the state. But this committee, formed in response to a community need, developed a new curriculum themselves and called it Hug a Tree. They created a booklet the first edition was admittedly “rough” aimed toward young school children and brought the lessons of winter survival into district classrooms.

The program won a Golden Bell award from the California School Board Association in 1984. Maxine Olson, Danny’s mother, was instrumental in taking the program nationwide.

Hug a Tree was designed “preventative in nature it is how not to get lost,” Sally said. “But if children do get lost, they also have the skills for survival.”

The curriculum is intended for elementary school grades and is cumulative, each year’s lessons building upon the previous, with a special focus for each grade level. For instance, in fifth grade, students concentrate on body heat loss and the importance of shelter in a cold environment.

To really drive the teachings home, in 1995 the district started taking kids out in the field, for hands-on experience. Winter Survival Skills Training was born.

Donner Trail Elementary School, up on Donner Summit and thus with a reliably deep snow base, hosts the training. In a 3- to 4- hour program, students are taken through a series of “stations,” each focusing on a different aspect of wintry weather skills, such as snowshoeing, snow cave building, avalanche awareness, and compass skills.

The training is not a requirement, but most teachers fit it in.

The strength of the program is “being outdoors and making the activities so fun, the students don’t even realize they’re learning,” said Mitch Dion, the Winter Survival Skills program coordinator. “We’re trying to help teachers enhance their curriculum and many teachers take this opportunity to dot the ‘i’ of their curriculum.”

Kathy Echols, a fifth-grade teacher at Glenshire Elementary, was out at Donner Trail with her class on February 2. As she crunched around on the snow, Kathy spoke about the value of the program. “Last week, my class was learning about how not to lose body heat. We talked about building a snow cave, but today, they are learning how to,” she said. “We study something in class, then we can cross-apply the lessons to Winter Survival Skills.”

Winter Survival expands on Hug a Tree by targeting students from first up to eighth grade. Students from around the region, all the way east to Reno/Sparks and west to Auburn/Sacramento, come to the training.

“There is a real hunger for outdoor education up here in the mountains,” Mitch said. It’s a hunger he helps fulfill with stories.

“When you go back into history, cultures teach kids through myths and storytelling,” he said. “The ways of engaging kids into safe behavior is through storytelling.”

Mitch shares stories about skiers or snowboarders skiing out of bounds, accidents that happen in the backcountry, a day of innocent sledding gone bad, and about brave rescues done by Tahoe Nordic Search and Rescue.

“I try to make the stories positive, about kids and people who were prepared,” Mitch said. One example, last February a couple got lost while cross country skiing in Serene Lakes. They ended up spending the night in the woods, with temperatures in the low teens. But the two survived, “in very good health” according to the Tahoe Nordic Search and Rescue Team, because they knew how to build a snow cave and were prepared with foam pieces and an emergency blanket to help insulate their bodies.

In a unique juggling act, Winter Survival employs a variety of teachers. Mitch, who discovered at age 45 that he was a ‘natural teacher,’ is the primary instructor. A few certificated district teachers help him on days when there are a lot of children. Parents and other volunteers often come and teach at a station. A couple of times, older children have taught younger students. And another couple of times, high school Spanish honor students taught younger English Language Learner students.

The cost of the program varies, but Kathy’s Glenshire Elementary class paid $1 per child. Out of district children pay an average of $5 a child. The program is self-sustaining with the district providing no money, just a site.

“The school and principal Susan Phebus are very flexible in letting us use their space. It involves a lot of negotiation and they have always been really nice,” Mitch said.

Different organizations have helped fund the program throughout the years, including Truckee Tahoe Community Foundation and Excellence in Education. This year, Alpine Winter Foundation, an “informal non-profit” based in San Francisco, was “very generous,” Mitch said.

Mitch is currently working with other outdoor education groups, such as Sierra Watershed Education Partnerships and the Truckee River Watershed Council to bring more self-sustaining, “place-based” learning opportunities to the district.

“We want to make it work in our district,” Mitch said.

“The big picture of the [Hug a Tree] program is a ‘don’t ever give up’ attitude, which also carries over to other academic areas and to the skills of everyday life,” Sally said.

Sally still teaches at Kings Beach Elementary one day a week. She recently asked a fourth grade class what they knew about Hug-a-Tree. A boy answered, with a hint of exasperation in his voice, ‘We hear it ev-ery year.’

Sally says she told him and his classmates, ‘That’s what is important. That you almost know it in your sleep.’