Truckee police chief Robert Leftwich sat in his car at a Reno Home Depot parking lot, heart racing as he scrolled through Facebook. He was monitoring what he calls “spin-up” in comments on a repost of a Truckee PD call to identify an alleged sex criminal. Discussion over the crime, the alleged perpetrator, and the morality of the department posting in the first place escalated. Powerless to take direct action, he knew in his gut that something could go seriously wrong.

Leftwich told Moonshine Ink that he calls his practice of constantly monitoring and analyzing Facebook and Nextdoor (some of the most popular sites in the area) an “OCD tendency.” Social media research and posting has become a vital component of Truckee PD’s criminal investigation and public communications strategy in recent years, following a trend in law enforcement to focus on that type of communication, both in public relations and as an investigative tool.

Yet while larger departments hire experts, in Truckee, it’s Leftwich himself heading the squad of four top police officials as the social media team. They have frequent meetings and check-ins, and are deliberate and intentional with their posts.

The spin-up sex offender case (to be discussed below) was one example where Leftwich’s gut disagreed with the wisdom of Cole Pro Media, the communications firm that consults with the Truckee PD on social media communications.

Laura Cole is the firm’s owner and said they advise about 30 departments in California on their social media presence. She recommends interfering rarely on social media, and responding to positive comments mostly, but recognizes that every department is different.

“Truckee is different than say Oakland or Sacramento or even Piedmont, which is tiny … At the end of the day, while we can give advice, we’re just consultants. It is the responsibility of the department,” Cole said.

Leftwich’s social media squad includes support services manager Deverie Acuff, administrative technician Bron Coey, and Randy Billingsley, a captain who runs the operations division. Each provides an advisory role, with Acuff managing the community announcement and animal services side of social media, and Billingsley, with his DA background, tending to advise Leftwich to hold off more often than not.

What follows are two of the most prominent recent cases heavily involving social media, one using it as an investigative tool while the other incident escalated from the aforementioned spin-up.

When Zoe House, a manager at Mountain Hardware in Truckee, realized that an expensive generator and power tools were missing from their inventory in November of last year, there didn’t seem to be much hope in finding the thief. But she diligently went back through surveillance videos, without a specific time stamp or eyewitness description to go off, and eventually found two individuals loading up the equipment into an empty baby stroller, covering it with a baby blanket, and casually walking out.

Cue Capt. Facebook to the rescue: House sent Truckee police a CD of the video section showing the two unidentified individuals. The police department posted the footage to their Facebook page with a call to the community to identify them.

The baby carriage caper thieves ended up being Christopher and Jennifer Chang of Sparks, who Leftwich explained were already known to the Sparks police and already had criminal records out of Nevada. They were arrested again in April by a Reno SWAT team for allegedly robbing an Apple Store.

House feels proud of having been able to help the police identify victims in such a timely way. “It gave me a lot of confidence in the police,” she said, explaining that Mountain Hardware, an employee-owned co-op, has experienced theft fairly regularly in recent years and that social media crowd sourcing has helped authorities solve other crimes of which they’ve been a victim.

In fact, as of press time, the Truckee PD’s most recent Facebook post involves another alleged theft from Mountain Hardware where photos from surveillance show an unidentified white male with two recognizable tattoos exiting the store with $800 worth of unpaid merchandise.

Leftwich said there is great value to police work in utilizing online community networks to identify alleged criminals, and there is another major upside to this kind of use of social media.

“By showing the good work we do, by allowing our community to engage in public safety things like identifying people, holding people accountable, we’re grouping together to solve community issues and that’s where we need to be,” he said.

He considers his role to be bringing people together to tackle the issues in society, and “social media illustrates that exact partnership we’re trying to create,” Leftwich said.

The post with comments that had Leftwich feeling uneasy at Home Depot was originally an attempt by the Truckee PD to identify possible further victims of football and skiing coach Anthony Coronado-Smith, who had been investigated and arrested for possession of child pornography, annoying or molesting a minor, persuading a minor to create obscene material, and sending obscene material to a minor.

The post about Coronado-Smith, who has an extensive friend and family network in the area and multiple roles where he interacts with minors, elicited fervent commentary and opinions on all sides from the community.

On a repost by 34-year-old Truckee resident Gayden Rosales to the popular Tahoe/Truckee People/Rants page, conversation got heated about whether police should have identified Coronado-Smith before his trial to seek victims. Mike Woll, a 45-year-old landscaping professional in the area, began the conversation with the comment that it is “highly unethical of a law enforcement agency to post anything about an ongoing investigation on social media.” 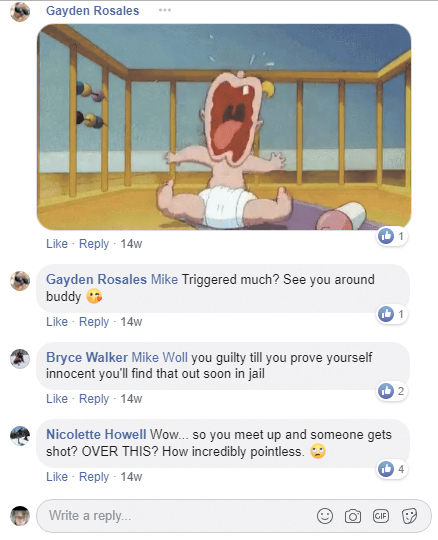 Rosales felt that Woll’s sentiment was biased by him being Facebook “friends” with Coronado-Smith, and that the PD had every right to post his identity to suss out more potential victims. Their disagreement escalated, becoming personal and including profanity-slinging and name calling, and ultimately Rosales wrote, “… dude, as a friend of mine, someone who I can recognize when I see in public, I’d be really careful about calling me an ‘imbecile.’ Because you don’t want to become the reason I ‘get off the keyboard.’”

The argument did leave the keyboard: first to text messages which, according to Rosales via Facebook, escalated to personal family threats by Woll. Rosales confronted Woll at his home, and a physical altercation resulted in Woll shooting Rosales in the chest, leaving him with life-threatening injuries.

Woll turned himself in and has been charged with assault with a deadly weapon and criminal threats, while Rosales is recovering from his wounds. But the debate remains about Truckee PD’s original victim-finding post in the first place. Truckee local and integrative healing professional Stephanie Paige-Belson engaged on Facebook with long comments critiquing the PD’s social media policies on both the Coronado-Smith post and the PD’s later post about the incident between Rosales and Woll.

Paige-Belson agrees with the department posting an alleged perpetrator-identifying post in the first place to encourage potential victims to speak out; but from her perspective from working with victims of violent and sexual crime, she doesn’t understand why public comments had to be turned on.

When victims are exposed to “this kind of incidental talk,” Paige-Belson said, “it can make them feel less certain about coming forward. It may be a triggering situation for them emotionally, especially if they’ve been a victim of violence. They wouldn’t want to incite further disagreement and violence so they often will not come forward.”

Both Cole of Cole Pro Media and Leftwich maintain that a department can’t censure comments in any way because it’s a violation of the social media user’s First Amendment rights.

Leftwich said that the firm tends to be involved in discussion for about roughly 40% of their posts. The internal social media team and Cole Pro will go back and forth about word choice and whether to post. Out of 100 posts, Leftwich feels they’ll intervene only in about two to three cases. But in this case, his open letter in reaction to ramping up tensions in comments by Woll, Rosales, and others asking to deescalate violent or threatening posts didn’t make a difference.

Yet he and the team agreed that they would post the call again in an instant, and that it all comes back to public safety. The original post identified multiple other victims in the ongoing investigation into Coronado-Smith.

“The problem is ultimately if you ask yourself what’s our core mission,” Leftwich told Moonshine, which is “to protect the community in every way we can … [The] next layer that’s even more of a moral or ethical decision is we protect those that can’t protect themselves. And a … victim of a sex crime or a child, those people don’t really protect themselves very well. So I have to sacrifice everything from our reputation to make sure that I protect those people.”

Social media squad member Billingsley pointed out that Coronado-Smith, and Woll for that matter, will get their day in court and it is far off from how long the community remembers a social media post. “There’s a lot of calm down time, where people are going to need to get their head right, especially those selected for jury service,” Billingsley said.

If Leftwich responded directly to ample comments, including Woll, who had expressed that an identifying post is a violation of the right to innocence until proven guilty, he would say, “let’s play that person’s thought out: We don’t release anything. And five years later, your child commits suicide … because of an event with an individual that the police department has arrested for a similar crime, [knowing] there were other victims out there and said nothing.”