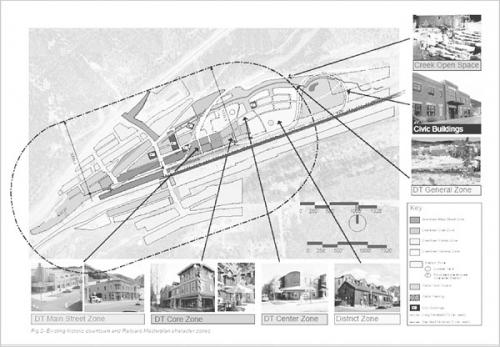 The Town has long eyed the Railyard, just east of downtown, as a spot in which to extend the downtown commercial core. The location is seen as a ‘clean slate’ upon which many community needs could be answered.

The RR project is a broad partnership involving Union Pacific (land owner/seller), the Calif. Center for Land Recycling, Calif. Dept. of Housing and Community Development agency, Holiday Development, and the Town of Truckee.

The RR is being partially funded by a State of Calif. Sustainable Communities grant for $350,000, which requires a three-phase review of Railyard’s planning process. The grant emphasizes sustainable development, using the latest in green building and highly efficient architectural design appropriate to this particular location. Holiday Development recently purchased the land from Union Pacific and is working closely with the Town on developing the property.

Phase 1, completed and presented to the Town in July 2005, included site planning, a market analysis, and infrastructure assessment. Phase 2, presented to the Town in May 2006, involved conceptual development and a master plan summary, which provided a general layout of the development with “blocks” and downtown connections mapped out. The project concludes with Phase 3, including a complete draft Master Plan, and finally, the part where we can all see the result of all this planning – the implementation.

Council reviewed a draft of the RR Master Plan mid-September. The Plan looks at development models that are “both feasible alongside and complementary to” downtown Truckee. These models will be continually revisited because several related projects are part of this whole process: Trout Creek’s restoration, Glenshire Drive’s realignment, the Balloon Track’s relocation, and the RR site’ physical cleanup.

Design consultants Dinsmore SIERRA are the lead master planners for the project, and are working on “securing funding, understanding the site in the context of downtown, laying out roads, developing the parks and public spaces, writing some of the site regulations, and generally ensuring that this is a project appropriate for Truckee,” lead consultant Darin Dinsmore said.

Phase 2 includes grander plans like moving the Balloon Track, realigning Glenshire Drive, restoring Trout Creek, and building out the RR Master Plan. Phase 2 is “everything else [including] at this point, multiple subsequent phases with different developers doing different things on the space,” Nishimori said. Berkeley-based LSA Associates will write the EIR, which should cost around $313,000, Nishimori said.

In response to criticism that there has not been sufficiently publicized information on the RR, Councilmember Josh Susman responded that, since 1993 when Truckee was incorporated, this has been a Town priority. He said this is the best site for such development because of benefits to downtown’s vitality, the lack of land clearing required, the toxics cleanup that will happen on site, Trout Creek’s restoration, cessation of Glenshire Drive leech water drainage, and the manifestation of key elements of the Downtown Master Plan. This public process has been ongoing for years, Susman said. “Yes, the jury is still out,” as to the specific ‘right’ answers, he said, and that is why public participation is so critical now and in the months to come.”

Councilmember Craig Threshie asked staff and Dinsmore SIERRA to consider an economic analysis of new businesses’ potential interaction with existing downtown businesses, the likely symbiosis of uses in the new development, and for an analysis of parking demand and interaction with alternative modes of transportation between Historic Downtown and the RR.

The time for public comment is coming up, so pay attention. Review the plans, make your comments and help strengthen your town’s core. For information on the Railyard Project, visit www.townoftruckee.com/planning.html and click on one of the three “Draft Railyard Master Plan” links. Or, call Town Planner Denyelle Nishimori at 582-2934.

During public comment, Downtown Merchants Association President Stephanie Olivieri asked the Council to adopt an “urgency ordinance limiting retail-to-office conversion while we figure out the best strategy to preserve vitality of the downtown for the general plan process.”

Olivieri urged the Council to adopt an urgency ordinance before their November ninth meeting “to preserve the status quo of the downtown.” Much of the available retail space has become offices, said Olivieri, and she believes there are “two more coming very soon.” “It is a matter of hours,” she said, and these offices often must sign three to five year leases.

According to Olivieri, the Truckee Downtown Merchants Association says there should not be any office space allowed on the ground floor of Commercial Row for three main reasons. First, offices “do not bring foot traffic essential to the downtown’s vitality.” Second, the retail interest of the downtown is compromised. Thirdly, there is no sales tax provided to the Town as with retail shops.

For readers craving a dose of municipal procedural details, a Town Council can pass, by four-fifths vote, an “urgency ordinance,” normally in conjunction with an issue in developing new standards to address general welfare or land use issues, etc… The Ordinance has a 45-day life, whereupon a conventional ordinance process begins.

Town Manager Tony Lashbrook explained that this would not affect existing ground floor office space but would “stay” any additional transition for 45 days pending a legal review by Town Attorney Dennis Crabb, who was away at the time of this meeting.

After a special Council meeting on October 26, the Town of Truckee unanimously passed the urgency ordinance. Olivieri applauded the vote and said that now there is “an opportunity to meet with all stakeholders and try solving the proliferation of ground floor office space in downtown. Certainly the concerns of the property owners and Board of Realtors need to be addressed,” she said.

John Falk, representing Tahoe Sierra Board of Realtors (TSBR), spoke at the special meeting against the urgency ordinance. There certainly needs to be discussion about the role of offices downtown, said Falk, “but the issue of property rights is important. What happens when a property owner cannot rent their space to a retailer? Which is worse? A vacancy along commercial row or an office space?” Falk said he appreciates the Downtown Merchants’ concerns, knows they have the Town’s interest in mind, and hopes that they can work with the Merchants’ Association over the next 45 days to find an amicable solution. “Hopefully the broad brush that’s been applied can be fine tuned in a short period of time,” Falk said.

Town Council is hosting a meeting Nov. 14 at 6 p.m. at Town Hall, seeking public feedback on whether ground floor office type uses should be prohibited, and if so, how best to implement this ordinance.