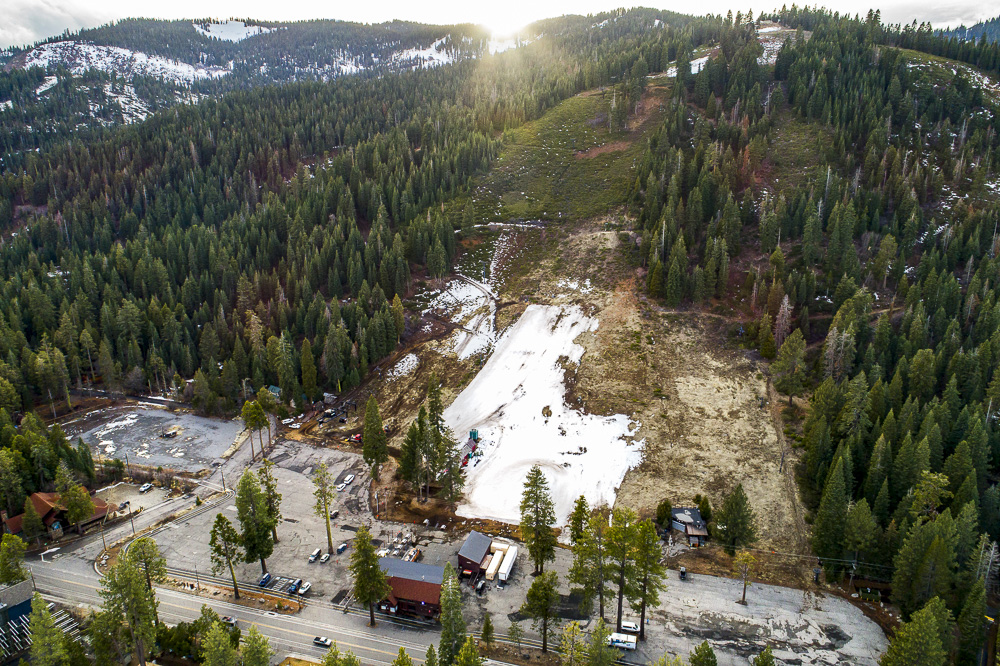 On Monday, Jan. 22, weather forecasts predicted an incoming storm late in the week. In Homewood, all eyes were turned to the sky after weeks of staring at the green and brown mosaic that blanketed Homewood Mountain Resort — the epicenter of the town — during the winter months. If the storm hit as predicted, it could be the saving grace for the struggling West Shore stores and inns that rely on snow driven tourism to survive the winter. But if the clouds cleared and the ground remained dry, it could spell disaster for the locally owned businesses in the sleepy, lakefront town.

The 2017/18 winter has started with a whimper, especially in the wake of the snowmageddon that gripped Tahoe last year. The consequences of a low snow year are perhaps most visible in Homewood, because of its isolation and direct reliance on the local ski resort for business, which only held 13 inches of snow at the base as of mid-January.

“Not having Homewood open top to bottom is playing a large factor in the amount of business we are and could be doing,” said Trevor Larkins, owner of West Shore Sports.

This winter has not been kind to West Shore Sports, a retail and rental shop just south of Homewood Mountain Resort on Highway 89. Ski tuning is the sole area of his business that is still seeing some consistency, but overall sales have slowed dramatically. Homewood does not benefit from the walking traffic that Tahoe City and Truckee get, Larkins says, and although the ski resort has some lifts open on its upper mountain, the paltry coverage viewed from the road has had a tangible negative effect on his business. Larkins says West Shore Sports is behind by somewhere between $80,000 and $100,000 in sales from last January, even considering he had to shut down for a few days due to flooding last season.

The worst part of this downturn, however, is not being able to support his employees, Larkins says. Finding employees is a struggle in Tahoe these days, due to housing shortages, so Larkins doesn’t want to lose any of the employees he brought on for this winter. But at the same time he’s had to cut hours, a consequence he knows is taking a toll on his workers’ livelihoods.

“They know that someone has to go home early, and obviously they need this job to pay their bills and live here,” Larkins said of his employees. “That’s my biggest issue; it’s hard because it changes morale in the store. There’s that black shadow of who’s going to go home today. I want to provide them with a happy and healthy work environment. It’s stressful on everyone when money’s not coming through the door.”

A little further down the road, Tahoma Meadows Cottages is also seeing a lack of bookings for this time of year. Owner Dick White said reservations were down for the December and January holidays, but that with an impending storm on the horizon, things were already looking up. He had reservations coming in for that very weekend, and more calling to book for Presidents’ Week.

“Really our phones didn’t start ringing until the last few days when it was snowing,” White said. “It got scary. [The weather] definitely hurt us; I’d say we’re behind a chunk for this winter, unfortunately.”

White said if the folks down in the Bay Area don’t see rain or bad weather, skiing isn’t really on their mind until Tahoe’s weather makes the news. Even with the recent upswing, White said that his sales numbers for this season are on par with the height of the drought, three seasons ago.

Over at Obexer’s General Store, they have found some ways to adapt to the lack of snow and tourist clientele. Layoffs at ski resorts have brought them new employees with unique skill sets, including their newly hired baker. They are now able to do baking in-house and expand their menu offerings.

The store is also offering specials to get locals in the door, like tri-tip Tuesdays and chicken and waffle Sundays. They are also benefiting from the temporarily limited hours at Tahoma Market down the road, and have been able to fill the local grocery niche to pick up some business they usually wouldn’t have.

The late January storm dropped 15 inches of snow at the base and two feet at the summit, bringing relief to Homewood Mountain Resort. It opened all lifts from top to bottom after two days of snowfall, which in turn helps the community that surrounds the mountain. But after that brief reprieve, the forecast showed no signs of snow for the following two weeks, making it hard to say how Homewood’s businesses will fare.

“Everybody is waiting in anticipation,” Larkins said. “Just even that little six inch storm would make Homewood look completely different.”

Dry January: Dreaming of a White Winter
12:00 am