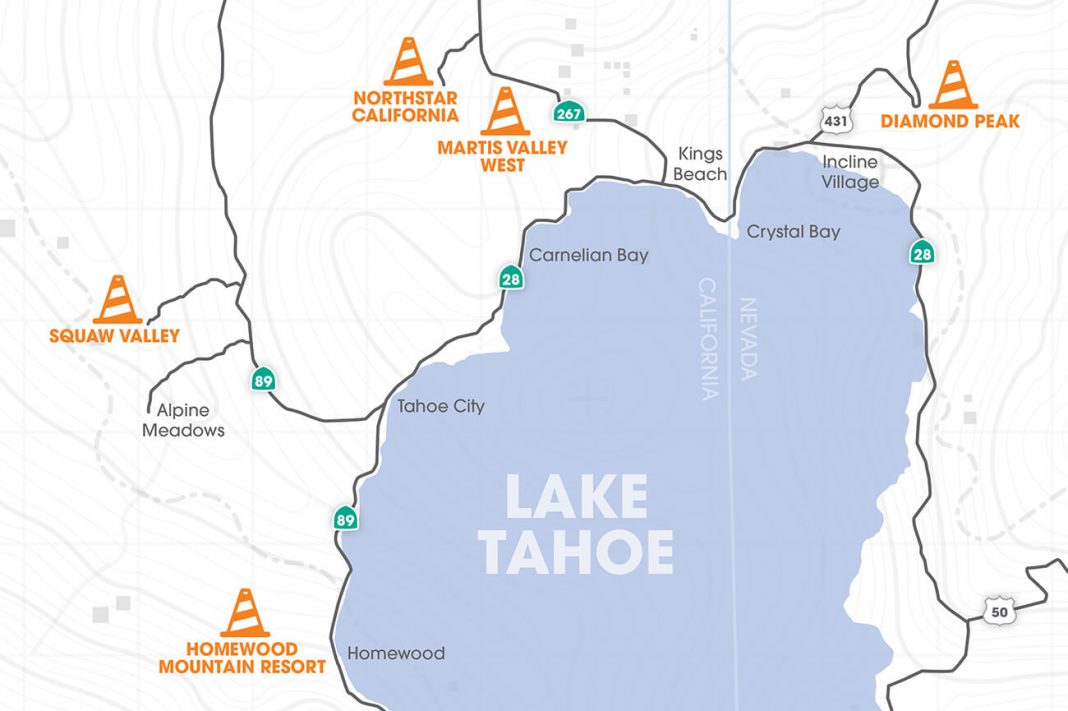 From ski resort master plan updates to major housing projects in the works, there is a development boom happening locally. Tahoe/Truckee has 12 major development projects on the horizon, and we lay out each project with a brief description and update.

The newest development proposal in the region, Martis Valley West Parcel, a project by East West Partners and Sierra Pacific Industries, proposes 760 residential units and a conservation easement. Sierra Pacific Industries owns property on either side of Highway 267 — 6,376 acres on the east side of the highway and 1,992 acres on the west side. The eastern portion includes 670 acres designated as potential future development under the Martis Valley Community Plan, which was adopted in 2003, and zoning allows for 1,360 residential units and 6.6 acres of commercial space. The Martis Valley West Parcel project proposes to shift a portion of the allowed development from the east parcel to the west parcel, where development is currently not allowed. Up to 760 residential units would be built on the west parcel, including 112 units inside the Basin boundary located between the Fiberboard Freeway and Northstar, while the remaining allowable development of 600 residential units would be retired. The entire east parcel of 6,376 acres, as well as 352 acres on the west parcel, would become permanent open space. While conservation groups in Truckee support the project, environmental groups in the Basin say the project is too large. The draft environmental impact report will be released in February 2015 with a 60 day public review and comment period. Placer County will hold public meetings in conjunction with the process. Info: mvwpfacts.com. The opposition has also created a website at savetahoeforests.com/martis-valley-west.html.

The Village at Squaw Valley Draft Specific Plan was released in October. Placer County is currently preparing a program environmental impact report to analyze the environmental impacts of the project. The draft EIR will be released in early 2015. The plan was first submitted to Placer County in 2012 and revised in June 2013, and again in June 2014.  The project was originally proposed as a mixed-use development that includes resort residential, commercial, and recreation uses as well as parking and other visitor amenities on approximately 101 acres at the west end of Squaw Valley. Most of the plan area is located on existing parking lots used for day parking by skiers, with some of the area located on undeveloped forest and meadow land. Info: placer.ca.gov

The Northstar Mountain Master Plan, conceived in the late ’90s, has been submitted to Placer County and is currently in the California Environmental Quality Act process for public review and input. The plan includes a variety of expansions, including access to backcountry terrain located on Sawtooth Ridge, 300 acres of new trails that would be accessed by seven new lifts, enhanced snowmaking, trail widening, enhanced food and beverage facilities, and a minor parking expansion. In June 2014, the final environmental impact review was completed. Placer County is in the process of certifying the EIR and Northstar is obtaining the necessary conditional use permits. Info: northstarcalifornia.com, click on the Mountain Master Plan link under the Northstar Experience tab

In January 2014, Homewood Mountain Resort won a lawsuit filed by several environmental groups against JMA Ventures, the parent company of the ski resort, for its proposed developments. The result of the lawsuit included a reduction of the residential units by 13. Homewood is now moving forward with its master plan, estimated to cost between $400 million and $500 million for the full build-out over an estimated 10 years. The resort is currently in the planning stages of the first phase of developments, which include a base lodge, a new on-mountain day lodge with a restaurant and bar, a new gondola, and more. Construction of this phase is targeted to begin in 2016 with estimated completion by fall 2018. Info: skihomewood.com/masterplan

An update to Diamond Peak’s Master Plan was completed in July 2014 after changing the focus from the original 1986 plan. The plan proposes opening the resort for expanded year-round operations; currently there are no summer operations. Additionally, there are discussions for expanding into 387 acres of terrain that are part of the Humboldt-Toiyabe National Forest, a section that is currently located outside the resort’s special use permit. The Incline Village General Improvement District board is in the process of vetting the revised plan, looking at the proposed summer activities for phase one of the plan, and receiving public comment, with the first steering committee meeting scheduled for January 2015. Info: diamondpeak.com, click on the Master Plan Update Process link in the About section.

Controversial due to environmental and traffic impact concerns, Canyon Springs is a proposed subdivision near Glenshire. It would include 177 single-family parcels, eight parcels for affordable housing, and approximately 171 acres of open space. Environmental studies have shown that the project could impact a herd of mule deer that winter in the Verdi mountains. The comment period for the Canyon Springs Recirculated Draft Environmental Impact Report ended in November, and the final EIR will be releaed in early 2015. Info: townoftruckee.com

Although the Truckee Railyard Master plan was approved in 2009, a pre-application for Phase I development in the Downtown Extension District was just submitted to the Town of Truckee on Oct. 2. The proposal includes a 30,000 square foot movie and performing arts theater, a distillery or brew pub, a grocery store, artist housing, and workforce housing. Developer Rick Holliday is trying to secure funding for the project, but hopes to break ground in summer 2015. Info: truckeerailyard.com

The town is currently processing a specific plan for Joerger Ranch. The plan area will focus on zoning for several land uses, including commercial and retail, office, industrial, residential, and open space. It is located at the four corners of Highway 267, Brockway Road, and the Soaring Way intersection, and includes 67 acres of mostly undeveloped land. The planning commission reviewed the draft specific plan in July, but no decisions were made. Info: townoftruckee.com

The Truckee Town Council approved the Coldstream Specific Plan in September. The 178.9-acre area entails an infill and mixed-use development project located on the western end of Truckee, which will include 300 residential homes.

Pollard Station is proposed to be an age-restricted senior neighborhood located on the 8.05 acre Davies/Fitch property in the 37.8 Hilltop Master Plan area. The project proposes 126 separate residential units, including 86 units in a 76,458 square foot senior lodge, and 40-two bedroom condo units. A planning session was held on the project in September and the public comment period for the Pollard Station Mitigated Negative Declaration ended Oct. 23. Info: townoftruckee.com

The Tahoe Donner Cross Country Ski Center was approved earlier this year and is currently under construction, with a tentative grand opening scheduled for February 2015. The center replaces the old Nordic and equestrian facility and will house improved food and beverage service, an enhanced rental operation, an upgraded locker room, a larger wax room, and a new multi-purpose room, as well as a deck with fire pits and an expanded parking lot. Info: tahoedonner.com/cross-country

Although a resubmittal plan was submitted to the town in April to construct a 17,000 square foot Grocery Outlet on Palisades Drive, the owners requested in December that the project be put on hold. The owners were seeking entitlements for commercial development of 2.2 acres of a 7.02 acre property.