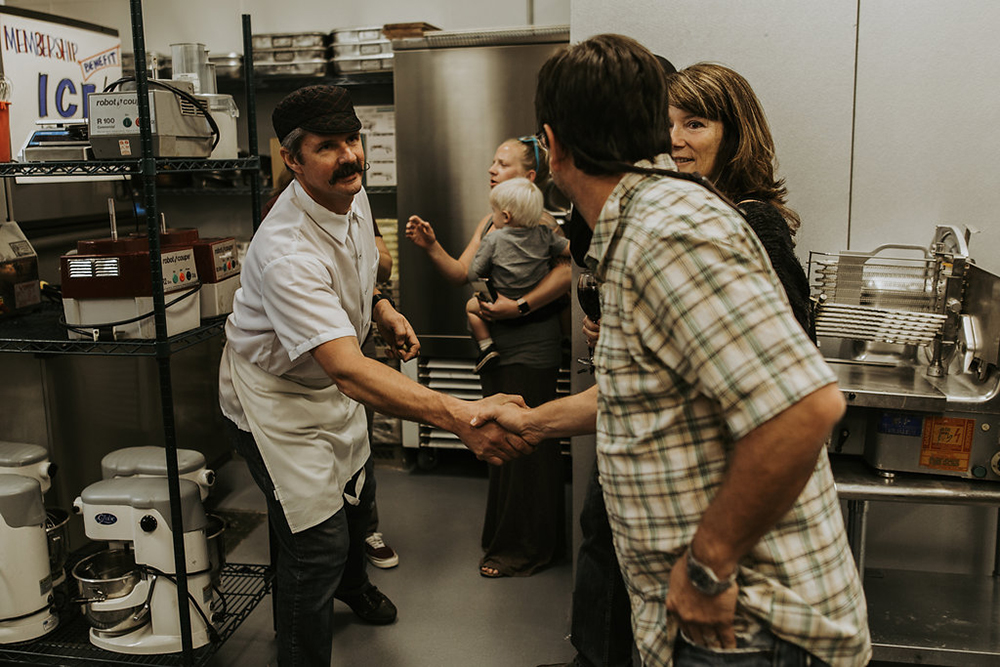 Alex Tolger’s new business, Kitchen Collab, which opened in May in a retrofitted space behind the Save Mart in the Truckee Crossroads shopping center, breaks the mold as the area’s first food-focused incubator. The 1,800-square-foot kitchen with 11 prep stations and three hot lines is a membership-driven, shared workspace giving food entrepreneurs access to a top-of-the-line commissary kitchen along with business development services that include an office space and a conference room. Tolger is uniquely suited to help others get their small food businesses off the ground because the road to opening his own passion project has been one of persistence in the face of uncertainty.

Kitchen Collab has been a long time in the making; the commissary kitchen concept had intrigued Tolger before he moved to Tahoe. After working as a chef at Drunken Monkey and FiftyFifty Brewing Co., he was looking to get out of the restaurant grind and explore the food scene in a different role.

“Food in this area is nostalgic; a lot of the concepts have been here for 20 to 30 years,” Tolger said. “That’s not always a bad thing, but there is a lot of possibility for growth and for new visions of what food can be in the area, and we’re starting to see that already.”

Tolger was hearing that people want to start new enterprises — from food trucks and catering businesses to baking and bone broth making — but don’t have access to the kitchen space necessary to do so. Some area entrepreneurs work with restaurants to use kitchen space after hours. Not only are those nocturnal hours a tough schedule to maintain, Tolger said, but also the available kitchens in the area, like the one at Coffeebar, are often booked up.

“Chefs didn’t have anywhere to go anymore,” Tolger explained. “They are going to bigger cities, there’s no space for them to strike out alone here. There was enough talk among chefs, people fermenting, bakers, that they didn’t have a venue to pursue their business.”

It took Tolger four years to find the right location for his plan, but signing the lease was the easiest part of the process for him. After getting the keys in September 2016, he expected to start building in January 2017, he said. Construction didn’t actually start until July of that year. Some of the biggest obstacles Tolger faced were with the permitting processes; not only with the Town of Truckee, but also with the handful of agencies that oversee commercial food businesses, like the health department and the fire and utility districts.

Because his business is so unique, the town initially didn’t know how to classify it to issue a permit, he recalled. On top of that, he found it difficult to coordinate the various agency requirements; just because the town approved building plans didn’t mean the same plans would meet fire district codes. This became an issue when he learned at the end of the construction phase that he needed to install a fire monitoring system, rather than at the beginning when the building was gutted and the installation would’ve fit seamlessly into the plans, he said.

“If you had asked me two years ago, would I do this again, I would say ‘no way’,” Tolger joked.  “There’s no good way to learn those lessons until you’ve stumbled through them. The town has done its best to set up a system where you can ask questions, but it’s hard to know what questions to ask.”

High construction, labor, and real estate costs are difficult symptoms of doing business in Truckee, Tolger shared. Timing is also a challenge. Some of the more specialized contractors, like the company that installed the specific floor a commercial kitchen requires, couldn’t schedule an appointment for four months.

Despite the obstacles, the process held many upshots. In the end, the project will cost about a million dollars, far more than the original estimate of $600,000, but much less than the $2.5 million Tolger said it could have cost him, had he not been savvy and had some fortuitous breaks. The years he spent finding the perfect location paid off in tangible construction savings. Because there used to be a Burger King and dry cleaning business adjacent to the building he was using, Tolger could access a large gas line and more electrical power. He also procured equipment from across the country through online auctions for about 15 cents on the dollar for what it would cost retail.

Kitchen Collab is now open for business and taking on members. Membership tiers vary from offering just a few hours in the kitchen each month to access to refrigerated and dry storage space, and include access to the coworking office space and other business development tools Tolger is planning to introduce. He said he needs 10 to 15 business members to make the project financially viable. He will limit membership numbers for the first year in order to make sure things run smoothly in the kitchen before he adds more clients to the mix.

“There has been this growing energy within the food industry here locally,” he said. “Now it’s time to see if we can make space for a younger group of chefs and food producers to drive that even further forward. We’re not just a stop-off on I-80; we’re a destination.”