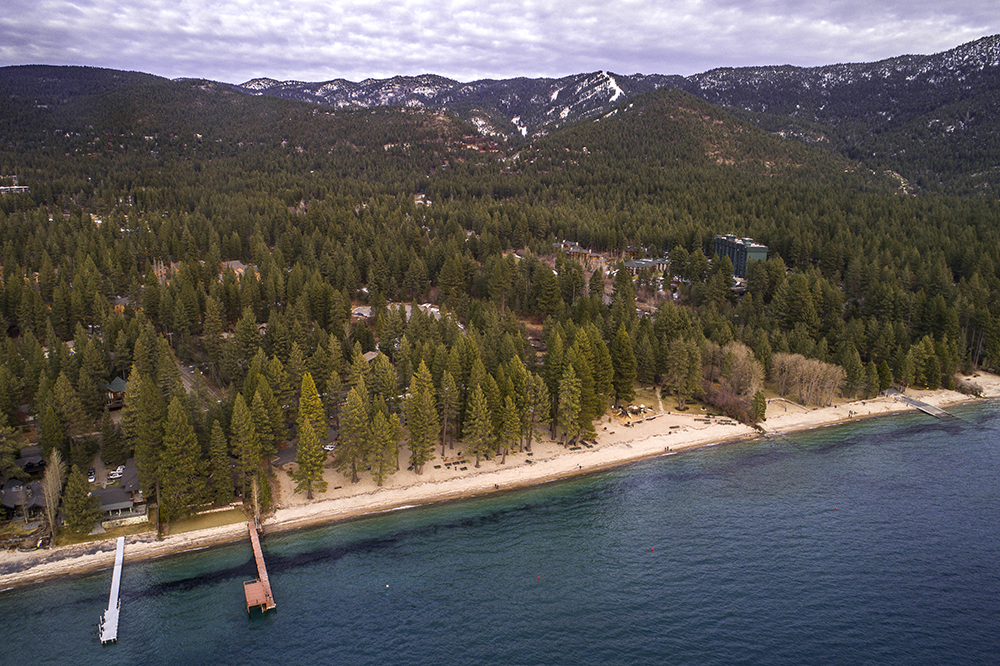 An armed police officer is an odd fixture at a public meeting, especially in a small mountain town. But lately, Washoe County deputies have been present on a semi-regular basis at Incline Village General Improvement District (IVGID) board meetings due to public backlash for a score of the organization’s decisions and activities. The complaints are many, ranging from lawsuits to “veiled threats,” according to Washoe County Sergeant Josh Palmer, and primarily concern issues tied to the complex and sometimes convoluted history and evolution of the district. Depending on which side of the issue you stand on, IVGID is either a model to be followed by other districts, or an opaque institution in dire need of proper oversight.

At the crossroads of being a rural locale with increasingly urban needs, IVGID began taking on duties that proved cumbersome for Washoe County to provide beginning in the 1960s. Founded in 1961 with humble beginnings in waste treatment, the self-described “quasi-public agency” grew its responsibilities in both governmental and business affairs over the years, until finally its holdings represented something unique in the world of special districts. Now IVGID owns approximately 1,500 acres in the Incline Village area where it operates everything from the town’s public utilities to the local ski resort, and it all started at the beach.

BOTH SIDES OF THE COIN

In 1968 Incline’s public amenities were put up for sale by Crystal Bay Development Company, and according to Steve Pinkerton, IVGID general manager, “little IVGID, who was just responsible for water, sewer, and trash,” issued a bond to residents to cover the purchase of Incline and Burnt Cedar Beaches. This was the birth of the IVGID recreation fee and amounted to $50 per parcel, per year in 1968. Fifty years later, the “Recreation Standby and Service Charge (rec fee),” has grown to $830 per parcel, a yearly total collection of $6,746,000 estimated in the district’s 2018 budget, and is used to finance recreation programs and facilities. This fee subsidizes operations for the wide range of recreation services IVGID has adopted since its beach purchase, including a recreation center, tennis center, The Chateau and Championship Golf Course, and Diamond Peak Ski Resort, and is lumped into the district’s community services fund. In exchange for paying the full rec fee, residents are given either punch or picture passes that allow them free access to the local beaches, and reduced rates at IVGID’s golf, ski, tennis, hunting, and recreational programs, as well as the recreation center.

Here’s where it gets a little funky. Since its inception, the rec fee (also called a facility fee on IVGID’s website and some documents) has been accounted for in an enterprise fund, which must include “exchange transactions” — meaning the customer is given goods and services in equal value to what they pay. In June 2016 IVGID began reporting its community services fund, encompassing the rec fee and revenues from its recreation facilities and services, as a special revenue governmental fund, which must be made up of non-exchange transactions — the customer does not receive goods and services of equal value to what is payed, e.g. taxes. The district then made the argument that its recreation revenues, such as from the operation of Diamond Peak, the Championship Golf Course, the recreation center, all other recreation services, as well as the rec fee of $830, were primarily non-exchange transactions.

This policy change coincides with a record-breaking year for the community services fund, due to inflated revenues for Diamond Peak Ski Resort of approximately $2 million more than projected, according to an IVGID October public presentation. According to IVGID’s most recent budget, “Unlike many governments that rely on a majority of revenue from tax sources, the majority of the district’s sources are charges for services. For the governmental funds this includes recreation charges to users of about $13,976,000 and facility fees to parcel owners for availability of services of about $6,746,000.” In the 2017 budget, these numbers came out to $13,508,900 and $5,890,320, respectively.

Pinkerton said the main reason for altering the accounting structure was based on an attempt to make the new system much more transparent, because the district could then segregate its revenues for capital projects, debt service, and operations into specific categories. In enterprise funds, these categories would all be lumped into one fund. According to a guidance letter by the State of Nevada Department of Taxation, however, “an activity may no longer be reported as a special revenue fund based only on management’s desire to account for it separately.” The crux is that in practical application, said guidances are closer to fluid suggestions as opposed to steadfast rules, especially in the case of IVGID.

“The state agrees with us, and all the auditors agree with us that most of the revenues coming into the recreation fund, the largest revenue source, single source, is the rec fee, and in exchange for that fee you do not get a specific service, you get access to those services,” said Steve Pinkerton, addressing the change in accounting structure. “We’re very comfortable with how we treat these things from an accounting standpoint.”

Cliff Dobler, an Incline resident and retired certified public accountant, has heavily criticized the district for this restructuring and even held public presentations on IVGID’s finances. He is one of a few Incline residents who have become increasingly vocal against some of the district’s policies, mostly regarding their accounting structure.

Dobler argues that not only is the community services fund not eligible as a special revenue fund, but as such a fund, the rec fees may only be allocated for operations and not capital projects, which is what is currently happening according the IVGID’s five-year plan. He says the rec fee is only intended as a stand-by to subsidize the fund during poor revenue years to maintain a minimum reserve balance and that it shouldn’t be charged when the reserve requirement is met.

“They’ve been assessing this fee, and there’s really no reason to continue to assess it because you exceed your reserves and therefore you just can’t transfer the money over for something else,” Dobler said. His argument starts not at the transfer of money within the fund, however, but with the ineligibility of the fund itself due to its contents not qualifying as non-exchange transactions.

Dobler argues that the $13 million plus recreation charges are exchange funds, because prices for entities such as Diamond Peak and the golf course are set to recover their costs. Even if the almost $6 million in rec fees can be argued as a non-exchange tax, Dobler states that it only makes up 13.24 percent of the overall community services budget when the portion allocated for capital projects and expenditures is eliminated, which is hardly a significant enough ratio to qualify as a governmental fund.

Why ignore the capital projects and expenditures? According to the Governmental Accounting Standards Board Statement Number 54, the “proceeds of specific revenue sources,” or foundation of the fund must account for “specified purposes other than debt service or capital projects.”

Another criticism levied by Dobler and others is that governmental funds do not have to include depreciation, or the decrease in value of an entity’s assets, while an enterprise fund must. This eliminates what would appear as $2,200,000 of yearly expenditure on the community services fund balance, making the fund appear more profitable than it actually is, according to Dobler. At its core, his argument concerns a lack of transparency exhibited from IVGID regarding both its accounting and use of rec funds, a prevalent complaint from many of the district’s critics and one it continues to attempt to appease, seemingly to no avail. In place of depreciation, the district compiles a yearly asset replacement plan, listing and evaluating the health of the district’s assets, which Pinkerton said is a more comprehensive tactic for tracking and addressing the need for replacement of facilities.

LINES IN THE SAND

According to a budget statement by Gerald Eick, IVGID’s director of finance, the board wanted the ability to break the rec fee up into sections for capital expenditure, debt service, and operations, but “historically, there was no effective way to demonstrate compliance for these separate elements.” In other words, there was no clear way to track the rec fee dollars to specific uses. “Since the entire fee is committed to the purpose of each Special Revenue Fund,” Eick writes, “they [rec fee revenues] flow through those funds, and then [are] transferred for the non-operational portions that support capital expenditure or debt service.”

Pinkerton backed up Eick’s statements, saying that many of the decisions that IVGID must make regarding its accounting policies aren’t black and white and that “they’re really philosophical and what we believe is a policy and best practice … these are policy discussions that people are trying to turn into other things.”

It is likely that no matter the policy decisions made, regarding IVGID’s accounting and other matters, there will be concerns raised by the public. That’s government. How IVGID structures its accounting would likely be criticized even if the district had done the opposite, and changed its community services fund from a governmental to an enterprise fund, according to Pinkerton. The overarching and final issue brought forth by Dobler, however, and shared by other members of the public has less to do with the means, and more to do with the ends, or how the funds are being used.

In an October board meeting scheduled to address questions about IVGID’s financials, Pinkerton and Eick credited the last snow year and the unexpected inflated revenues it brought to the community services fund. The rec fee remained flat throughout this welcomed bump, and as stated before, the fund lacked more than $2 million in previously accounted for depreciation expenditures. Due to transfers IVGID makes between the operations side of this fund and the capital projects and debt services side of the fund, those added revenues from the rec fee and other recreation revenues can be directed toward just about anything in the district’s five-year plan. This includes capital projects such as the Diamond Peak Master Plan and the potential purchase of what is known as the Parasol building — an initiative that has been curtailed for the time being due to multiple complications.

It’s these transfers that Dobler contends are illegal, although Pinkerton claims that IVGID has the backing of its auditors and the state. Ironically, it is the same document, State of Nevada Department of Taxation Guidance letter 15-001, that both Dobler and Pinkerton provided to Moonshine in order to substantiate their claims. Talk about the gray areas of quasi-public agency accounting.

“When I look at it I see passion on both sides,” said Sergeant Josh Palmer of the Washoe County Sheriff’s Department, who has visited some of the board meetings recently, both to keep the peace and as an involved Incline Village resident. “Everybody draws their line in the sand and that’s it.”